UNTIL THE FLOOD LAYS BARE THE SOUL OF RACISM IN FERGUSON/U.S. 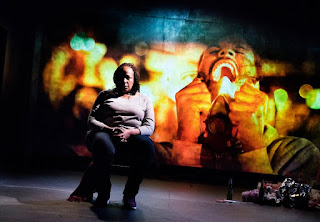 Dale Orlandersmith's Until The Flood, playing in the intimate Owen Theatre at Goodman Theatre now though May 12 is exactly what the Greeks had in mind when they invented theatre. It brings together strong words and nuanced characterization that are both symbols unto themselves and representative of a larger truth. The play uses the words of actual Ferguson residents compiled from moths of in-person interviews conducted in and around the now infamous  Missouri city  where 18 year old Michael Brown was gunned down by a young, white police officer, Darren Wilson, on the night of August 9, 2014. The incident became, literally, the racially charged shot that rang around the world, sparking international protests, and a wave of rising cynicism and outcry over similar incidents of police over-use of force in black communities around the country. The most recent manifestation is this stage production by Pulitzer Prize-nominated playwright Dael Orlandersmith.

Until The Flood was originally commissioned by the Repertory Theatre of St. Louis in 2016 and debuted there in a theatre just blocks from the scene of the tragedy. Since then, the play has played to rave reviews Off-Broadway. After its limited Goodman engagement, it continues its journey to Seattle's Contemporary Theatre and Portland Center Stage.

Playing eight composite characters based on her extensive research into the moods of actual residents in the years following the Ferguson shooting, Orlandersmith inhabits each of the personages with an uncannyy and often unnerving accuracy. Watch as she dawns a shawl (one of the lone props in this minimalist production by Set Designer Takeshi Kata) and slumps into an old wooden  chair as the 72 year old retiree Louisa Hemphill, whose poignant words paint  vivid verbal image of what it was like to grow up in segregationist Ferguson in the 1950s.  She refers to the  racial sword of Damocles that hung over every black person's head; "Don't let the sun go down on you in this town." The threat  implies a violent result for those who dare not comply with its decree.

We then hear from Rusty,a retired white Ferguson career policeman who defends the right of police to use force when there's the slightest doubt, to Hassan, a 17 year old street kid who dares the white establishment to point a gun at him and fire. Next, there's Connie, a well-intentioned young white teacher at an all-black school who finds solace in a glass of Chardonnay in the area's only upscale wine bar.  There, she unburdens herself by alternately boring and offending her one black friend, a fellow teacher, who listens to her guilt-ridden racial platitudes with chagrin.Then comes  Dougray, a young white self-made man who is perhaps a symbol of those upwardly mobile young whites who are gentrifying black neighborhoods around the country. He makes no bones about harboring a deep animosity toward  blacks who are his neighbors and sociological kin. So deep is his resentment that he says he'd just as soon line up all young black men and shoot them down. In his twisted logic, he's making the world "Clean. White. Purified!"

Orlandersmith uses words like a sculpture etching indelible images into a piece of stone. She moves seamlessly from character to character, not giving us so much as a psychological breath.  The cumulative effect is a psychological tsunami that leaves one emotionally drenched, yet wanting more. We're drawn to Orlandersmith's characters like moths to a flame, only the flame is the smoldering embers of a racial Armageddon, both ignited and sanctified by the blood of Michael Brown. Until The Flood is a haunting piece of theatre with words that reverberate far beyond the parameters of the Owen stage. They are a clarion cry of conscience that rightfully echo deep in the subconscious long after the theatre lights have dimmed.
Posted by Dwight the Connoisseur at 2:24 PM