PATRIMONIO: DAVID AND GOLIATH STRUGGLE OF BAJA FISHERMEN'S FIGHT AGAINST BIG DEVELOPERS GOT PERSONAL FOR FILMMAKERS 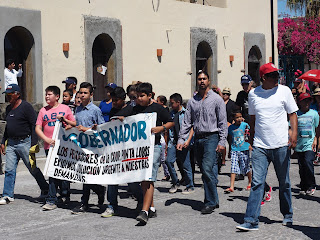 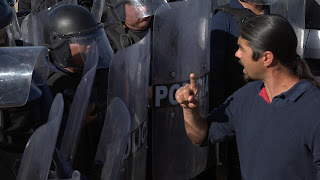 "We are taking on the giants!" was both the rallying cry of the subjects in PATRIMONO, the superb documentary by  Emmy Award-winning(HBO, PBS, BBC, A and E) filmmakers Lisa F. Jackson and Sarah Teale and the plot summary of  the film which has its New York Premiere at the 2018 DOC NYC Film Festival Tues. and Weds., Nov. 13 and 14.  The film will also be available on all digital platforms and on DVD March 2019. When the filmmakers  set out to film the documentary PATRIMONIO, it started out as a project that got very personal from the beginning.

According to filmmaker Sarah Teale, some Colorado developers and their Mexican partners set out to create a luxury community in the tiny beachside community of Todos Santas, Baja Sur, California. Teale's husband's family had owned a house in the community for decades. When she noticed a huge retaining wall going up around the Punta Lobos beach where fishermen launched their boats to make a living, it set off alarms in her head. When she got in touch with her fellow filmmaker friend Lisa F. Jackson, the wheels started turning on a documentary project.  The proposed Tres Santos project was described to the locals and the project's investors as an idyllic community that would be an ecologically conscious haven for its primarily American upper class resident. On the surface, what seemed like a local problem had much larger implications. Its indicative of a much larger global problem; big developers are coming into communities like this sleepy beachside community, disrupting the local economy and destroying the ecology.

The project in question was Tres Santos, an idyllic beachside resort that developers were selling to naive American investors as an ecological utopia on the Baja beach. What the developers failed to mention was that the development would completely destroy the beach that the fishermen used to launch their boats, which is vital to their livelihood. The fisherman had used this beach for more than 100 years. Generations of families based their livelihood on their ability to launch their ships on the narrow strip of beach which the development would effectively destroy, not to mention the surrounding hillsides, water supply and desert and marine ecology, by tripling the population.

The film unfolds  through the eyes of Rosario "El Chayo"  Salvatierra, whose family has fished these waters for four generations, and John Moreno, a surfer, attorney,  environmental activist and descendant of local pearl divers,  who takes on their cause. Local town officials apparently drank the Kool-Aid proferred by the developers, that building 5,000 homes in their tiny, sleepy community would somehow bring economic gain, when in reality it would bring an end to their way of life and destroy the delicate balance of nature.

It is the fishermen, spearheaded by Moreno and Salvatierra's family, who finally bring things to a head. There's a dramatic standoff with the police SWAT team that threatens to end a nearly three-month blockade against the development, culminating in the arrest and incarceration of Moreno. Things climax right before our eyes as the will of the people and their resolve to win at all costs is tested to the max. Filmmakers Teale and Jackson are to be credited with their ability to train the objective eye of the camera unflinchingly on the events as they unfold, allowing the visuals to ascertain the truth without commentary. It is a riveting film that reveals in microcosm a growing global phenomenon that many will ultimately face in similar situations, greater or smaller, within their own communities. In that regard, PATRIMONIO, is a cautionary tale that foretells the road ahead for us all.  In addition to the DOC NYC screenings, the film will be released digitally and on DVD by First Run Features in March, 2019. 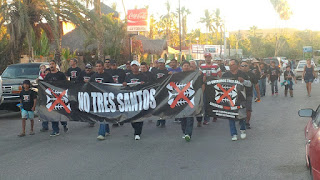 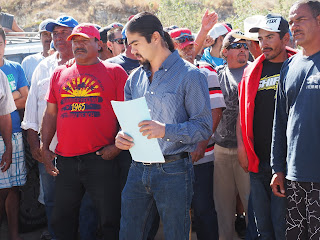 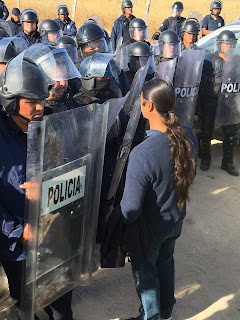 Posted by Dwight the Connoisseur at 6:27 PM