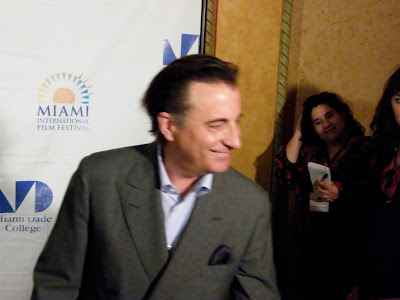 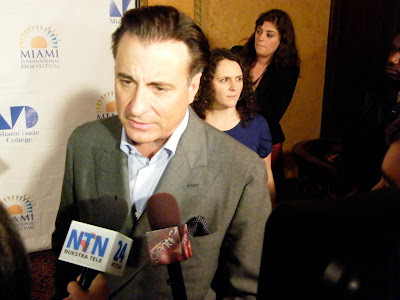 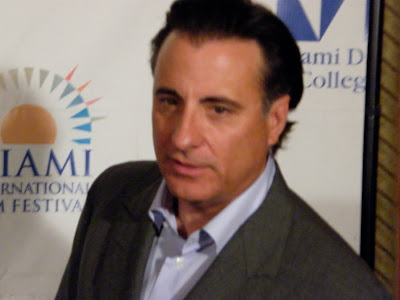 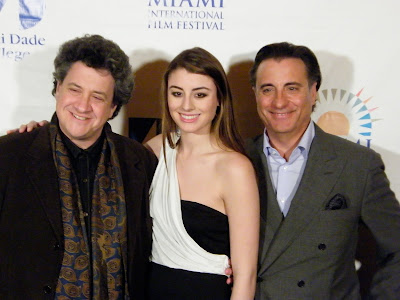 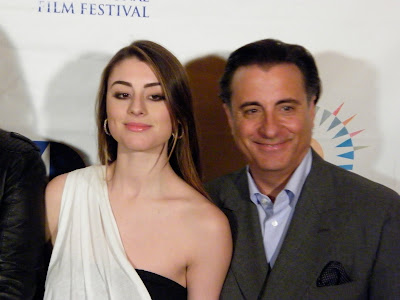 The film takes a dark comedy look at a protagonist and a family trapped in the watershed of their own deceptions. Garcia plays Vince Rizzo, a prison guard (“Excuse me, that’s ‘correctional officer,” Rizzo patiently tells all who make the common fuax pas), who is anything but ‘correct.’ In fact, he and his entire family take lying to the level of high art.

Rizzo has dreams of becoming an actor and has been moonlighting by taking acting classes. Too embarrassed to tell his wife and suffer her acid-tongued ridicule, he would rather lie and tell her that he has a gambling problem and is out playing poker. His daughter Vivian (a sparkling debut outing by Garcia’s real-life daughter Dominik Garcia-Lorido) is pretending she’s away at college when, in fact, she is working in a sleazy dive as a stripper. The lynch pin that drives the story is Garcia/Rizzo’s discovery that he has an illegitimate son who is, in fact, one of his prisoners. He brings him home to his family under the guise of some made-up prison release and rehabilitation program that only exists in his own mind. It turns out the con is the only one in this dysfunctional menagerie who isn’t trying to con someone.

Even the setting of the movie is a contradiction. City Island is a tiny, isolated New England-type fishing village plopped right in the middle of Hudson Bay in the shadow of the Brooklyn Bridge. The Manhattan skyline looms in the distance, but this self-conscious, brooding eyesore of a hamlet couldn’t be further removed from all the glitz and glamour of the Big Apple. Cinematographer Vanja Cernjul (Wristcutters: A Love Story-2007, Where God Left His Shoes-2008) does a marvelous job of capturing the shimmering tranquility of City Island and juxtaposing it against the turbulence and outright ugliness of the Rizzo family’s inner turmoil.

Audience Award winner at the 2009 Tribeca Film Festival, the film received its Festival Premiere in the town that the Cuban-born Garcia considers home before an enthusiastic Gala audience.

Director Raymond De Felitta characterized the film’s appeal among audiences succinctly when he told the sold out crowd, “This is the kind of film that everyone who sees it absolutely loves it, but none of the big studios will touch it. Everywhere we’ve shown this film, audiences rave about it. Fortunately, we found a sympathetic ear in Anchor Bay which agreed to distribute it.” The film has opened in Miami and will have its New York commercial run later this spring and break out in limited distribution around the country. “Every time we show this film, the word of mouth gives us a bigger audience at the next showing. I hope you come out an bring your friends and families when it opens here in Miami and really give this film your support.”

Andy Garcia’s daughter Dominik gives a standout performance as his screen daughter Vivian. She really captures her character’s flaws and vulnerabilities while simultaneously revealing the steely resolve that lies underneath.

“Andy had wanted to hire a ‘name’ actress for the part,” Director De Felitta revealed, “but Dominik had said all along that she wanted the part. She even took pole dancing lessons at her local gym so she’d be ready.” De Felitta said Garcia didn’t necessarily discourage Vivian from seeking the part but he didn’t want to do anything that seemed as if he was influencing the final selection. “Instead, she took the indirect route and went through the casting agent who had been hired by the film. She did a reading and made a favorable impression. When the actress they originally hired to do the part fell through the casting director called Andy and told him that his daughter was the best choice and that she already knew the part by heart!” And the rest, as they say, is history and the makings of an absolutely delightful film.

As the credits rolled on City Island, the audience erupted into a deserved standing ovation. Their ‘favorite son’ had won their hearts.

Posted by Dwight the Connoisseur at 11:50 AM