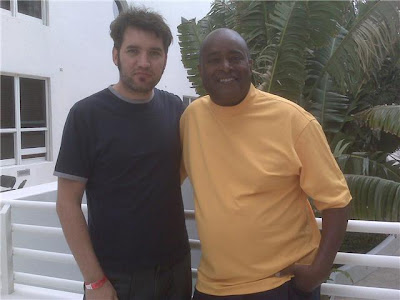 Chilean director Cristian Jimenez is a bit disheveled after a night of partying in the aftermath of the final screening of his debut film, Optical Illusions (Ilusiones Opticas) in its North American Premiere at the 2010 Miami International Film Festival. The film was one of a dozen shown as part of the Ibero-American Competition, which presented dramatic features from first, second, and third-time director from Latin America, Spain and Portugal.

“We were doing karaoke until three o’clock this morning. Both my singing and my English are terrible, but people kept on cheering and I kept on singing. Maybe they were further out of it than I was!” A writer for a French publication, in town for the festival, laughed in agreement as the two shared breakfast in the patio garden of the Royal Palm Hotel on South Beach, Miami, and the festival’s temporary headquarters

“I’m on my way to France,” he volunteered. “I’ll be presenting the film at the Film Festival in Toulouse and then I’ll be spending six months in Paris on a film project.

“My film has been showing in France for three weeks already,” he said with amazement. “I’m expecting that we’’’ even do a few weeks more when I get there. We didn’t even do three weeks in Chile!”

Enthusiastic responses on foreign soil were borne out at the inaugural screening at the 2010 Miami International Film Festival in a late night Saturday screening at the Regal Theatre on South Beach’s famous Lincoln Road, which is similar to Chicago’s Rush Street/Oak Street/Mag Mile area.

In a post-screening Q. and A., director Jimenez expounded on the film’s multiple themes. Optical Illusion is a Robert Altman-esque pastiche of plots and characters, similar in structure to the Oscar-winning film “Crash.” Three stories involving characters of completely divergent backgrounds somehow intertwine to deliver a unifying message. “I decided that instead of using the conventional arc of following the story of one character to its conclusion to use a multi-dimensional structure that focused on three very different situations. On the surface, they seem isolated from each other, but they all share a common characteristic. Each of the protagonists reaches a crisis that forces them to look at their lives and have a new beginning. The change is often brought about by their connection and ultimate bonding to another person."

The storylines seem quirky, even comical on the surface, but they each have the ring of truth. A once-blind skier who regains his sight through the magical work of a modern, miracle-working clinic suddenly finds himself an unwilling celebrity spokesperson for the company His new-found fame drives him to despair, making him wish for the solace of sightlessness. A mall security guard falls in love with a beautiful, but wealthy shoplifter. Bored by her privileged existence, she thrill seeks the possibility of being caught red-handed. At first, the novice security guard watches her antics like a voyeur through the mall’s security cameras. When she begins to deliberately taunt him with suggestive movements on the elevator security cameras, the guard goes into hot pursuit. His impending doom is all but certain.

The third story, about a financial services employee who is humiliated by his unceremoniously ‘firing’ precipitated by the global economic downtown. “A lot of people think this part of the film is pure fiction,” Jimenez told me in a private interview following the screening. “But this actually happened. When I returned home last summer, my father had been fired from the executive’s job he’d held for thirty years. The most humiliating thing about it is that they didn’t just let him go, they transferred him to a dead-end job in an ‘outplacement bureau.’ It was the most humiliating thing imaginable. Having someone show up for work everyday to perform a task that they know is meaningless. It’s really cruel. This surreal Kafkaesque situation wasn’t something I make up. It actually happened. Finally, the character in the film develops the guts to quit, but not until he bonds with his son, who gives him the courage of his convictions and a new beginning.”

Posted by Dwight the Connoisseur at 12:33 PM