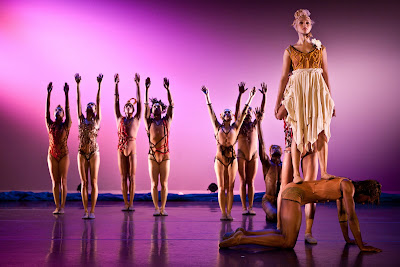 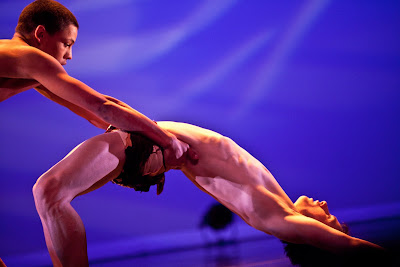 Cisne Negro at the Joyce Theatre:

From “Black Swans” to Red Firebirds

The most dazzling piece, Flock (2007), from the company’s Chevalier of France Order of Arts and Letters choreographer Gigi Caciuleanu, the company displayed its unique ability to mold its dancers, in groups of two and three and as solo performers, into a series of geometric shapes that change in rapid, kaleidoscopic succession. “Michelangelo come to life!” is how my neighboring dance enthusiast described the visual experience. With music by Igor Stravinsky, the company vividly portrayed the choreographer’s symbolism of transforming motion and color into pure energy. The Lighting Design, by Raquel Balckian further underscored the kinetic movements of the dancers.

The gifted young Brazilian composer Andre Mehmari composed the score for Abacada, choreographed by the company’s Assistant Director Dany Bittencourt. The piece was a study in contrast, in which the dancers, improvising in solo or duo displayed their ample strengths. The word ABACADA is similar to a Brazilian term that stands for an Amazon fruit or a little bird. In this piece, it actually represents the composition’s Rondo structure of A (the main theme and ensemble/chorus dancers) and the contrasting B.C. and D themes featuring the dancer’s improvisations. The piece draws heavily on Brazilian folk tradition, which embodies ancient rituals and dance from Africa and India with the influence of European aesthetics throughout its history. It is a visual immersion in all that is the cultural fusion of Brazilian life and art. Each of the dancers literally threw themselves into their performance and danced with abandon!

Calunga, was the most visually stunning of the evening. A new work, in its New York Premiere, it featured choreography by the company’s Rui Moreira, regarded as one of Brazil’s premiere dancers. It was truly a tour de force with brilliant costumes by Gustavo Silvestre.

Cisne Negro has performed in countries around the world and is considered one of the most important modern dance companies in Brazil. Its repertoire mirrors the culture of its native city, Sao Paolo and its mix of cultures and races, with a style that explores the diverse elements of black culture and folk tradition and integrates them into a unique style of presentation. Their dancing is highly technical and virile with an earthy authenticity that is breathtaking.

Posted by Dwight the Connoisseur at 3:50 PM