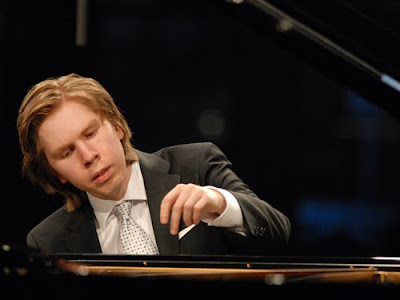 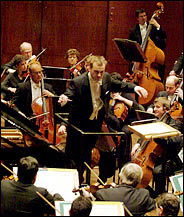 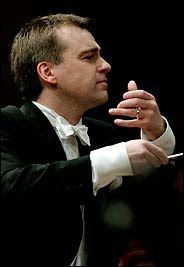 NEW YORK—Lincoln Center’s Avery Fisher Hall was brimming to capacity with seats lining the perimeter and rear of the concert stage in unprecedented fashion. The anticipation of the crowd for Lincoln Center Presents Mostly Mozart Festival was satiated with a scintillating performance by the Mostly Mozart Festival Orchestra, under the baton of British conductor Jonathan Nott.

The festival program, which featured Mozart’s Piano Concerto No. 23 in A major, with the brilliant young Finnish pianist Juho Pohjonen at the Steinway, contrasted the music of Stravinsky and his Symphonies for Wind Instruments, and Beethoven’s Symphony No. 4 with that of the world’s greatest composer of all time.

Maestro Nott proved himself particularly adept at executing Stravinsky’s shifting tempos and rapidly changing themes, particularly the elegiac coda and alternating pastoral themes that echoed his famous opening to The Rite of Spring. Stravinsky’s musical ideas, while boldly modern, looked back to the uncluttered clarity and beauty of Mozart’s musical ideas. Nott and the festival orchestra brilliantly captured Stravinsky’s sonorities, with Nott elevating the brass far beyond its normal bombastic reaches to become a contemplative choir of an elegant nature.

Juho Pohjonen slipped almost unobtrusively on stage and eagerly perched himself on the Steinway’s bench. His no-nonsense approach hurled him directly into the dance-like opening passages of one of Mozart’s most inspired pieces. Pohjonen’s playing captured all of the youth playfulness and inventiveness of Mozart’s fertile creative genius. Each note in his flurry of lengthy and difficult passages was delivered with clarity of tone that allowed each golden note to reverberate on its on strength, with little affectation or showmanship. Pohjonen used the pedal only sparingly, letting the strength of his supple fingers and the surety of his spot-on attack deliver the goods. It was a bravura performance that certainly must have had The Master smiling somewhere in the firmament.

Maestro Nott brought out the best in his orchestra with his handling of the tricky dance rhythms of the Allegro. His handling of the contrasting pianissimo and the sudden crescendo that followed was masterful. The timpani, with its ringing pronouncement, framed the piece in the majestic splendor it deserved. Nott used his considerable skill to present the theme of the closing scherzo that mimics the theme introduced in the first movement. The device is a clever one on the part of the composer. Nott and his crew kicked it up a notch with a lively surge of syncopation at the end. If I hadn’t known better, I’d have thought that Beethoven had a little jazz lurking in his veins!

Posted by Dwight the Connoisseur at 10:08 AM