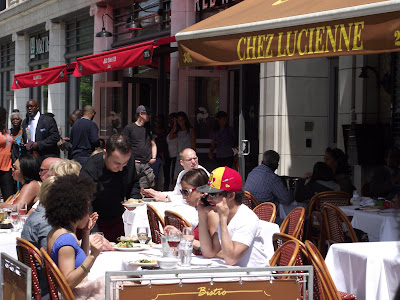 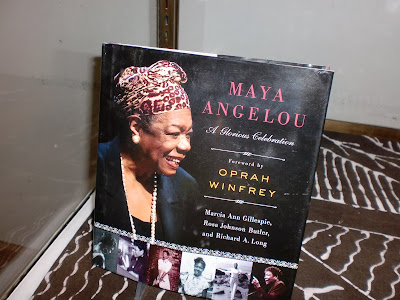 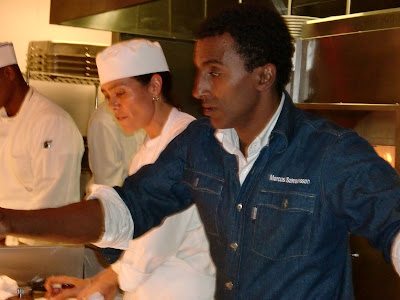 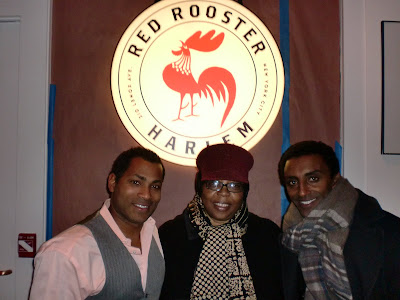 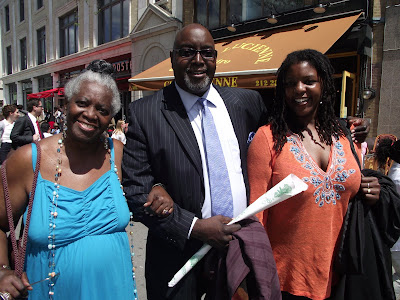 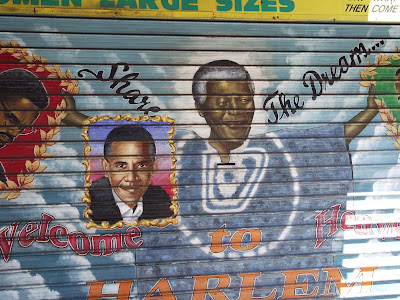 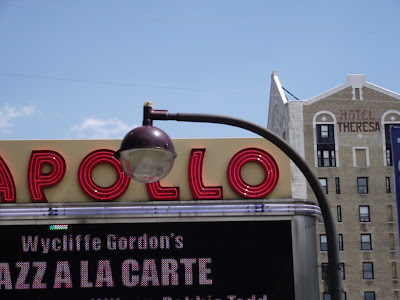 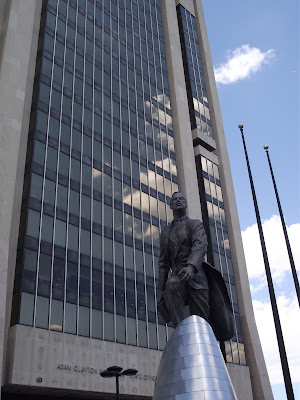 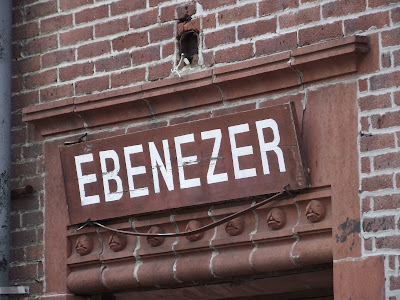 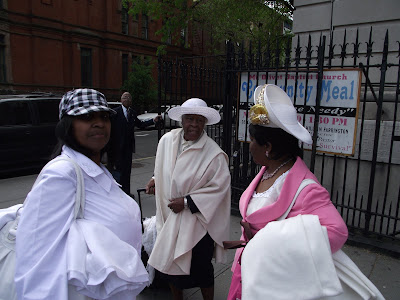 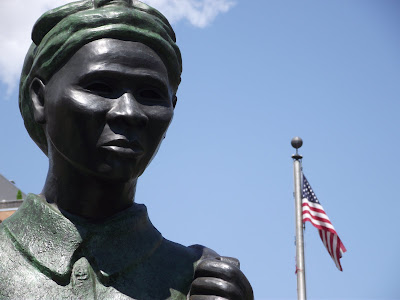 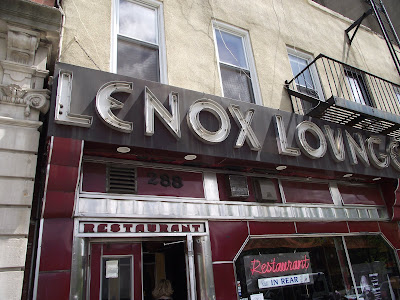 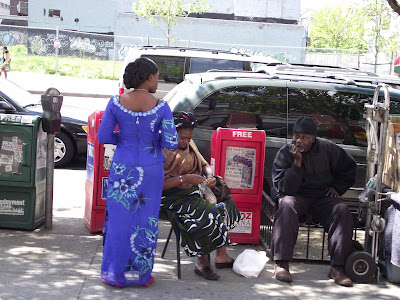 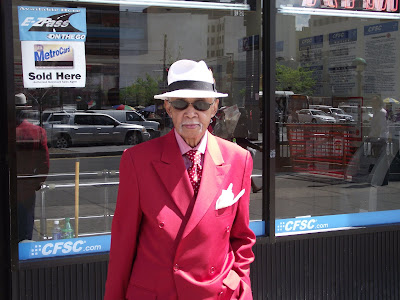 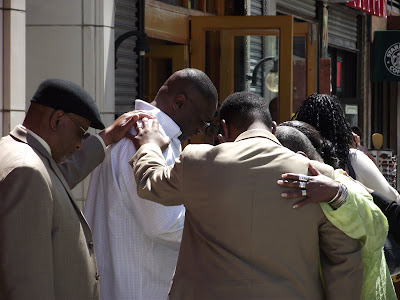 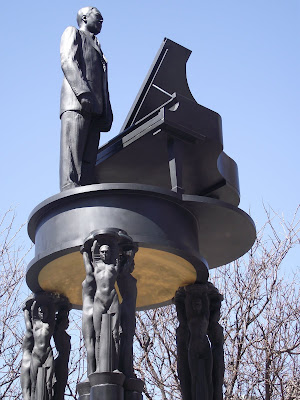 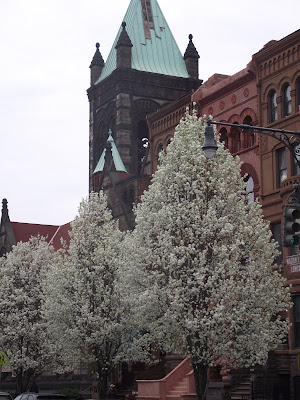 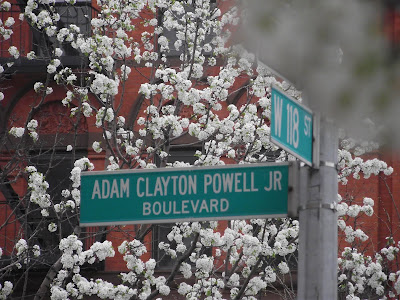 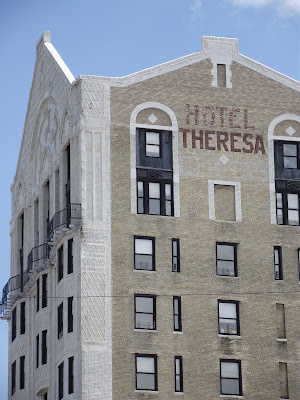 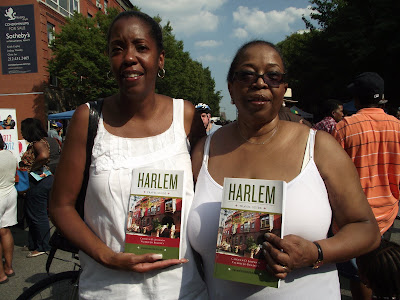 1. "Restaurant Row" on Malcolm X Boulevard in the "new" Harlem

2. A collection of renowned poet and Harlem resident Maya Angelou's personal letters and artifacts which she recently donated to the Schomburg Center for Research and Black Culture in Harlem

3. Chef Marcus Samuelsson at the helm with his culinary staff at Red Rooster Harlem

7. The world-famed Apollo Theatre with Hotel Theresa in the background

8. Statue of Congressman Adam Clayton Powell, Jr. in front of the State Office Building in Harlem named in his honor

9. A sign outside Ebenezer Church on Malcolm X Boulevard

10. Church Ladies and their regal "Crowns"

12. The famed Lenox Lounge on Malcolm X Boulevard remains a jazz favorite. It originally opened in 1939 and was home to Dinah Washington, Ruth Brown, the Ink Spots and Dakota Staton among other music greats

13. Harlem is home to many international cultures

15. An impromptu pause for prayer

16. The monument at Duke Ellington Circle at the north entrance to Central Park is the first monument in New York City dedicated to an African American and the first memorial in the United States honoring the jazz music giant

19. The famed Hotel Theresa on 125th Street in Harlem

Published by: Welcome to Harlem

NEW YORK-Harlem is renowned throughout the world as the birthplace of the Black Renaissance, from the black repatriation movement of Marcus Garvey, the founding of the NAACP by W.E.B. Dubois through the black empowerment speeches of Malcolm X and the political power broking of Congressman Adam Clayton Powell. What most people don’t know is that Harlem is inextricably tied to the cultural and political growth of our nation. From its humble beginnings as a Native American seasonal settlement and a Colonial-Dutch outpost, it later became the headquarters of General George Washington in the dawning days of the Revolutionary War. Once New York City’s first suburb, it became a safe-haven enclave for a succession of European immigrants. It is preeminent today as the epicenter of African American and Latino culture.

Tired of the narrow focus of previous travel guides, authors Carolyn D. Johnson and Valerie Jo Bradley set out to create an authoritative and authentic guidebook that fully explored the 400-year history of Harlem, USA. The authors are a latter-day mirror image of the ambitious settlers that have come to call Harlem home. Carolyn Johnson is Harlem born and bred and is owner of Welcome to Harlem Tours. Her collaborator and editor is Harlem activist Valerie Jo Bradley. Together, they have created a first of its kind travel guide, which uncovers the hidden treasures of the most unique urban community in the world.

Harlem Travel Guide is a one-of-a-kind tour book, which deals with Harlem exclusively. It is organized in to distinct sections that highlight each of its unique districts, Central Harlem, where African Americans settled in the early 1900s, East Harlem, which is home to the Latino population, to West Harlem, home to a diverse population of African Americans, Africans, West Indians, Latinos and whites. With clubs, restaurants, art galleries, theatres, libraries, churches, places to shop, landmarks, parks and monuments, it offers one of the richest experiences anywhere to a visitor. Harlem Travel Guide gives an “insiders” view that can’t be found anywhere else!

Co-author Valerie Jo Bradley said she and Carolyn Johnson decided to write the Travel Guide because of the lack of information in previous publications.

“Most of the travel guides in New York only devote to or three pages to Harlem and they only mention a few of the attractions, such as the Apollo Theatre, Abyssinian Baptist Church and Sylvia’s restaurant, which most people already know. What they don’t include is all of the sites in the rest of Harlem. They only do Central Harlem, not even mentioning attractions in East Harlem and West Harlem.”

Most people will be surprised at the information revealed in the book’s 250 pages. East Harlem, which is now predominantly Latino, was also home to a rather large Italian community. A few vestiges of that community still persist, including several popular restaurants and an annual celebration that brings many former Italian residents back to their old community.

“In East Harlem there is the Dance of the Giglio and Feast,” Bradley recalled, “ which is a tradition established when East Harlem was Italian. Imagine 125 men carrying a five-ton, five-story, hand-sculptured tower and a twelve-piece brass band on their shoulders and dancing through the neighborhood in tempo to Italian folk songs. Italian families return every August for this event that began in the late 1880s in Brusiano Italy to honor Saint Antonio.”

There’s also a “new Harlem” emerging that is racially diverse and upwardly mobile. “Harlem has undergone a housing boom and a massive dose of economic development. Newly renovated properties are coming on the market and new businesses are being opened at a rapid pace. “

Malcolm X Boulevard (Lenox Avenue) near 125th Street and Frederick Douglas Boulevard (8th Avenue), have become virtually “restaurant rows” with new cafes, cabarets and coffee shops popping up like spring flowers. One of the most notable and celebrated is Red Rooster Harlem, the creation of Celebrity Chef Marcus Samuelsson, a Harlem resident. A reincarnation of the legendary Red Rooster restaurant, which was known as the virtual office of Congressman Adam Clayton Powell, the new Red Rooster is the place to see and be seen in New York, with celebrity sightings, such as those of Tony Bennett, Stevie Wonder, Paul McCartney, Bob Dylan, Tom Brokaw and Danny Glover, are an almost nightly occurrence. The wait can be up to an hour and a half, even with a reservation. But no one seems to mind. They’re usually happily dancing the night away to the live Salsa band in the massive curved cocktail lounge, especially on a Tuesday night!

Photos and memorabilia from the earlier Red Rooster line the walls, most of them donated by former patrons of the original restaurant. I’m sure somewhere at a corner table, Adam himself is saying “Keep The Faith Baby!” while chomping on one his favored Cuban stogies!

There are several places where the book can be purchased:

on-line at www.welcometoharlem.com and www.amazon.com

Also, the book is formatted for the kindle, Ipad, and android and can be purchased at the Amazon website.

People can also visit the Welcome To Harlem Visitor Center located at 2360 Frederick Douglass Blvd., between 126th and 127th streets in Central Harlem.

Posted by Dwight the Connoisseur at 5:11 PM