REVIEWED BY DWIGHT CASIMERE NOVEMBER 8, 2012
NEW YORK--A capacity audience at Carnegie Hall on a chilly November night, hard on the heels of the devastation of Hurricane Sandy, attested to the tsunamic power of the Brazilian musician and cultural icon Gilberto Gil. Isaac Stern Auditorium was filled to capacity, with every Brazilian in a 500 mile radius in attendance. Gil dazzled, danced and discoursed through a kaleidoscopic journey through his more than 50 year music career, beginning with such favorites as Fe Na Festa, Three Little Birds and Casamento da Raposa. A devotee of forro, the pop/folk music of his native northeastern Brazil. He was inspired by its creator, the legendary Luis Gonzaga and was later influenced by Joao Gilberto and Jobim and the lilting melodies of the bossa nova.  Gil's intermissionless, more than two hour performance touched upon them all before breaking it all wide open with a medley of Bob Marley hits and reggae, which brought the audience to its feet and had them dancing the samba in the aisles. Carnegie Hall will never be the same! 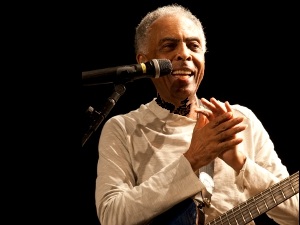 Gil's concert was the first installment in the Voices of Latin America festival at Carnegie Hall that runs through December 11 and expands out into a city-wide festival in New York, celebrating Latin America's music and arts. The festival is curated by some of the guiding lights of Latin American music and culture, who will also be among its participants, including the brilliant conductor Gustavo Dudamel and his Simon Bolivar Symphony Orchestra of Venezuela (Dec. 9,10&11), Samba legendPaulinho da Viola (Nov. 28) and Latin jazz piano titan Chucho Valdez (Dec. 4). Another piano great, Danilo Perez, performs Dec 4 & 8. The festival will feature musicians, singers and dancers from the entire spectrum of Latin American music. The festival makes a pre-Holiday trip to New York an absolute must.
Posted by Dwight the Connoisseur at 7:22 AM