The Tempest Met Live In HD is a stunning original 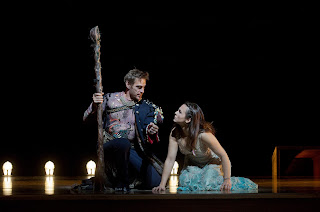 Simon Keenlyside as Prospero with Isabel Luna as Miranda 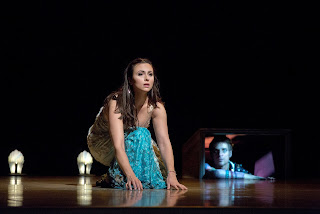 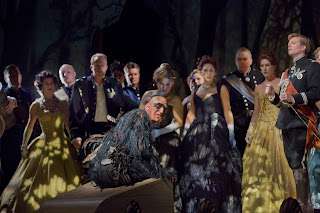 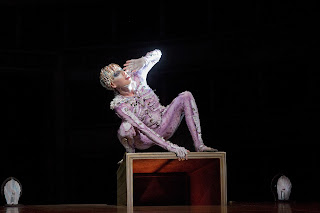 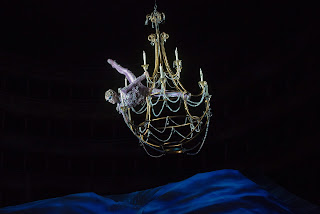 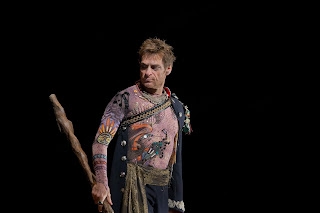 Simon Kennlyside is a commanding Prospero

NEW YORK—With brilliant staging, sets and costumes and emotionally riveting conducting by the composer at the podium, Metropolitan Opera’s new production of “The Tempest” promises to be the most successful work of the 2012-2013 season.

Seen in the theatres around the globe in Met Live in HD, The Tempest, directed for the Met by Robert Lepage and for Live in HD by television’s Gary Halvorson,

With stunning genius, director Lepage chose to set the opera within the confines of the citadel of the opera world, backstage at La Scala, which is, coincidentally, located in Milan, the home of the ousted eccentric Duke Prospero. Prospero, recreates the opera house of his homeland on the remote, stormy island to which he has been expelled for his sorcery./ Sung with almost creepy cunning by the vocally chilling baritone Simon Keenlyside, Prospero appears as a tattooed madman who manipulates people’s thoughts to the point of altering their surroundings. In that respect, he is like the omniscient general manager of a fantastic opera company. Kym Barrett’s costume,  depicts him as a tattooed, slithering wild man with a Vegas/Elvis slither running down his spine.

Ade’s score is dense, dark and complex, yet it holds your attention from beginning to end. “I’ve never sung so many difficult intervals in my life!” confessed mezzo-soprano Isabel Leonard, who sang the role of Miranda, Prospero’s daughter in a backstage interview with Met superstar and Live In HD host Deborah Voigt. Keenlyside and Leonard carried their substantial roles with authority and aplomb. The most vocally challenging singing role, however, went to coloratura soprano Audrey Luna as the spirit Ariel. Although aerial artist Jaime Verazin performed the majority of the actual acrobatics, Luna was still required to do some considerable maneuvering well-above stage level. In addition to the demanding, stratospherically high arias that tested even her ravishing, cosmic voice, she was required to be suspended,  almost Cirque du Soleil-style, while singing punishingly high, staccato intervals. All this while wearing a rather bizarre jagged-wing costume. The overall effect was a bit disconcerting, but her phenomenal singing made it a focal point of the opera.

If there were an opera Oscar for Best Performance while performing impossible aerial stunts, Ms. Luna would be the hands-down winner.

It’s not often that an opera composer gets interviewed backstage during a Met performance and even more rare, the fact that that he is also the conductor of the Metropolitan Opera Orchestra in the pit. Thomas Ades appointed himself well, with deeply moving declamations of his own score. The orchestra never sounded better and seemed to reach a depth of emotion that even surpassed the superlative work it did during last season’s Ring series, also directed by Lepage.

Ades was just 32 when his work had its premiere at the Royal Opera at Covent Garden in 2004. In the past eight years, there have been no less than four original productions of his work, a feat almost unequaled by any other modern-day work. His music is rich and powerful and the libretto by Meredith Oakes presents Shakespeare’s poetry in a manner that is both accessible to modern audiences and pleasing to the ear with its poetic symmetry which more approximates the rhyming lyrics of modern-day songs than the iambic pentameter of Shakespeare’s time.

“This is something I’ve wanted to realize almost since childhood,” Ades confided to backstage interviewer Voigt. “I first saw The Tempest as a child, growing up in England. I always had in the back of my mind, from the moment I started studying music, that I would somehow set his work to music myself and re-imagine it in my own way.”

For all intensive purposes, he has achieved that goal and beyond!

The Tempest will appear in a Met Live HD Encore Wednesday, November 28 at 6:30pm local time and in a Canada Encore Saturday, January 12 at 12 p.m. local time.

Mozart's La Clemenza di Tito is the next Met Live In HD Presentation Saturday, December 1 at 12:55pm. Check local the listings for times and theatre locations or visit fathomevents.com or metopera.org.
Posted by Dwight the Connoisseur at 10:40 AM