CHICAGO—Jack DeJohnette, 2011 NEA Jazz Master and Grammy winning drummer, lauded as one of the most important musicians of the last 40 years, celebrated his 70th birthday in his hometown of Chicago, in a concert that reunited his 1975 Gateway album collaborators, Dave Holland on Bass and the equally celebrated John Abercrombie on guitar. All three have deep interconnections throughout their brilliant careers. Besides their historic Gateway recording, they also have connections through various musical tributaries, including live performances and/or recordings with the legendary Miles Davis and orchestrator Gil Evans. The lyricism and musicality of each of the musicians was evident both individually and collectively as DeJohnette explored original works by himself and his sidemen/collaborators. A special treat was a solo piano performance by DeJohnette, during which he revealed a little known fact known by only those who knew him in his earliest days as a journeyman-musician in his native Chicago, where he was best known as a pianist. The solos he played were crystalline in their perfection and belied traces of the delicate impressionism of Claude Debussy and the adventurous harmonics of Stravinsky.

Born in Chicago in 1942 on the South Side, home to many jazz legends such as Lionel Hampton and Nat “King” Cole, Sonny Stitt, Gene Ammons and others, DeJohnette fostered his career on the crest of a mountain of jazz legends. A graduate of Englewood High School, where this journalist was privileged to be a friend and fellow classmate, DeJohnette went on to New York to complete his education and, more importantly, embarked on a musical matriculation with the greatest names in music, most importantly, Miles Davis, in 1968, where he would participate in the historic recording Bitches Brew, acknowledged as the most ground-breaking jazz recording in history. 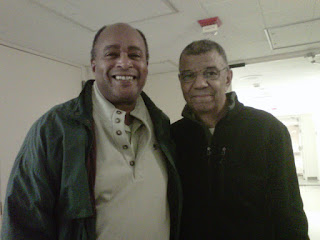 (The author backstage at Symphony Center with Grammy Award-winning NEA Jazz Master Jack DeJohnette. The two attended Englewood High School and the first year of college together before embarking on divergent careers in journalism and music.)

That foundation of accolades was confirmed in this night’s concert at Symphony Center, consisting primarily of original compositions by each of the participants. The lyricism and creativity and overall spontaneity of each of the musicians were evident throughout. Their playing was more like a chamber ensemble than a traditional jazz trio, achieving more through quiet listening and organic response than the conventional explosive jazz solo romps that serve to accentuate individual virtuosity over collective harmonization. This was a meeting of the minds of three jazz masters, who sought to convey their unanimity of thought through individual expression. It was an experience that consumed the soul and invited the listener to participate as an involved witness. The effect was both engaging and satisfying on a deep level that was both sensual and psychological. Its overall impact will be felt by those who heard it long after the final percussive echoes that reverberated into the far reaches of Symphony Hall.
Posted by Dwight the Connoisseur at 12:42 PM