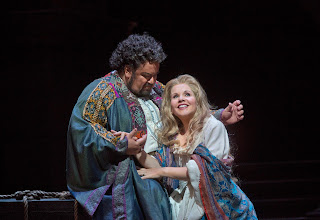 JOHAN BOTHA AS OTELLO WITH RENEE FLEMIND AS DESDEMONA 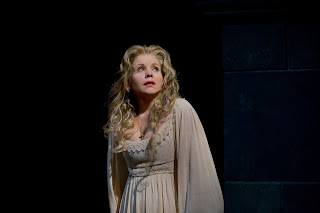 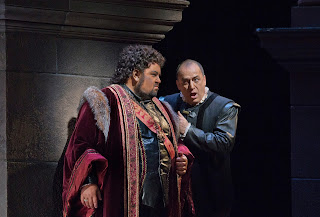 FALK STRUCKMANN AS IAGO MISLEADS A TRUSTING, BUT FOOLISH OTELLO 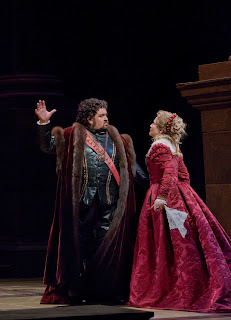 RENEE FLEMING IN ALL HER GLORY AS DESDEMONA IN VERDI'S OTELLO

NEW YORK---Audiences around the world were privileged to watch one of the world’s great Desdemona’s perform the role Live in HD, as Renee Fleming reprised the role she first performed for her first Met opening night 17 years ago in Verdi’s “Otello.”  The opera runs through March 30 live on the stage of the Metropolitan Opera through March 30, with a rotating cast. Future Encore performances in movie theatres will be announced in the coming months. Check metopera.org or fathomevents.com for dates and details.

Fleming doesn’t just perform the role of Desdemona, she inhabits it, investing herself fully in the drama and pathos of the character and lending a soft, velvety tone to such gentle arias as the “Willow Song” and the ravishingly dramatic “Ave Maria” which precedes her doom at the hands of the maddened Otello in his rage which is fueled by jealousy.

Tenor Johan Botha is most convincing as the headlong Moor, applying both the lumbering movements of his massive physique and the immense power of his burnished mahogany voice to convey the gradually unraveling emotional threads of Otello as he descends into madness.

Bass-baritone Falk Struckmann nearly stole the show, however, as the cunning Iago, chillingly portraying his ruthless nature in an aria that almost makes the blood curdle. His “Era la Notte” ends on an ominous note.

Conductor Semyon Bychkov kept the tension building during Verdi’s lush, dense score, maintaining a taut energy that underscored the opera’s mounting sense of tragedy. Verdi’s “Otello” is perhaps the greatest example of the composer’s dramatic genius. The Met’s absorbing remounting of this classic tale of deception and jealousy is one worth revisiting time and again.
Posted by Dwight the Connoisseur at 10:27 AM