Based on Gillian Flynn's blockbuster novel, the film tells the story of Nick and Amy Dunne (Ben Affleck and Rosamund Pike), two high flying New York writers who lose their jobs due to the recession. They move to North Carthage, Missouri (filmed in stunning clarity on location in Cape Girardeau, Missouri, at the southern tip of Illinois) to take care of Nick's ailing mother.

Flynn, who also wrote the screenplay,  uses the device of telling the story alternately through the voices of Nick in off screen monologue and Amy, through her diary. Every plot point in the story offers another clue, including details of their courtship and marriage. Although two-and-a-half hours long, this is a film in which you dare not take a potty break or go out for popcorn, because you just might miss something crucial.

Director Fincher ("The Girl With the Dragon Tattoo," "The Social Network"), knows his way around a mystery and displays his chops here with dramatic flourish. The performances are nuanced, with Affleck vacillating between befuddlement and fear to over-boiling rage and Pike expertly navigating the twisted path from submissive, victimized wife to diabolical schemer. Tyler Perry delivers a surprisingly strong supporting cast performance as Nick's Johnny Cochran-styled attorney.

Detectives Boney (Kim Dickens) and Gilpin (Patrick Fagan) deliver the stock skeptic (Boney) who doesn't quite buy the obvious evidence as its presented versus Gilpin, who is convinced Nick is the culprit.

The film starts with a meet cute between Nick and Amy at a Brooklyn single's party and hop-skips through their whirlwind courtship, steamy sex life and eventual marriage. The film quickly segues through to the demise of their comfy lifestyle and careers.

A dreamy sunrise and shots of deer roaming in the woods just beyond their comfy small town home  dramatizes their sudden shift from the bright lights of the big city to Main Street America.

It's then that Nick and Amy's lives truly begin to unravel. In spite of their best efforts, Nick's mother dies. He's forced to place his father in a nursing home, due to the violent onslaught of Alzheimer's. The Bar that Nick bought with his wife's trust fund money, proves to be an emotional albatross around his neck. His relationship with his twin sister, Margo, who his partner in the bar and confidant throughout, is a barometer of Nick's emotional ups and downs throughout the film.

The mystery begins to unfurl when, on the afternoon of their fifth wedding anniversary, Nick comes home from the bar to find a smashed coffee table, signs of breaking and entering and his wife, nowhere to be found. Detectives Boney and Gilpin are called to the scene and find traces of blood in the Dunn's otherwise gleaming, modern kitchen and a possible murder weapon in the fireplace. Almost right away, Gilpin is convinced its a potential murder scene. Boney isn't so sure. It all looks a little too staged.

Things immediately start to go bad. After Nick's display of hubris and his withering responses under cross-examination, the two investigators immediately set their sights on him. Media hounds and a near torch-bearing horde of townspeople add to Nick's harried demeanor. This is the only place where Fincher seemed to overplay his hand. The crowd is just a little too vigilante for today. It reminded of the Frankenstein chasing scenes from the old Karloff movies. As a former TV reporter who covered several high profile trials, including OJ, I can tell you I never once chased a moving van to nail a soundbite with a murder defendant.

Nick's plight isn't helped any further by the discovery of Amy's diary, which provides evidence of conflict in their marriage. The pages reveal that there were arguments over an unwanted pregnancy. instances of spousal abuse and suspicions of Nick's infidelity. Subsequent pages reveal her  growing fear that Nick will become more violent.

The nail in the coffin is Amy's final entry.  "He is certain to kill me."  To compound matters further, she's left a series of notes, labeled as "clues" to her disappearance, which Nick explains is part of an annual treasure hunt game that the couple  play each year as a shared joke as during their anniversary celebration. Rather than leading Nick and the police on a treasure hunt, the clues only lead to Nick's further incrimination.

There are lots of shared signals and internal telltales in their relationship. Such as the way Nick touches his chin in almost sign-language fashion, to let her know when he's being absolutely truthful.

Enter Nick's celebrity defense attorney Tanner Bolt ( Tyler Perry), who advises Nick to own up to his mistakes publicly and take the bull by the horns. He urges him to go on the attack. He begins to dig up some dirt on Amy in order to sully her goody-two-shoe reputation.  To counter the media barrage portraying her as an abused wife, he advises that Nick portray her as the conniving little rich girl with a sordid past that she apparently is.

Bolt (Perry) proves his work by starting to earn his exhorbitant $100,000 retainer fee right away. His henchmen dig up the dirt: there's a pre-Nick relationship with a fellow rich kid college sweetheart,  played by Neil Patrick Harris, who she accuses of stalking. We later meet him as a smarmy,  self indulgent multi-millionaire who still harbors an blinding lust for Amy. This proves to be his undoing in spectacular fashion. I will say no more.

There are some terrific scenes and strong performances throughout. In addition to Perry as Nick's attorney, Carrie Coon gets an honorable mention as Nick's twin sister and morale booster.

In a news conference following the press screening for Gone Girl at the New York Film Festival, which preceded the Red Carpet Opening Night, director Fincher and the rest of the cast, along with author/screenwriter Flynn, talked about the process of making the film.

Although it was shot out of sequence, as most films are, Fincher said that one of the important elements that he tried to maintain over the course of filming, was the element of surprise. He accomplished this with the gradual unraveling of the plot through the actions of the characters and the visual elements  he placed with precision throughout the film.

Fincher employs a number of effective techiques to heighten the sense suspense.  In "Gone Girl" he pulls out all the stops. "When I first read the book," he said, answering a reporter's question, "I realized that within it, there were three movies." Fincher somehow manages to take his audience through all of them in one sitting, without missing a beat. "Gone Girl" opens in theatrers everywhere October 3. Even though I've already seen it, I plan to be at my local theatre to see it again on opening day. 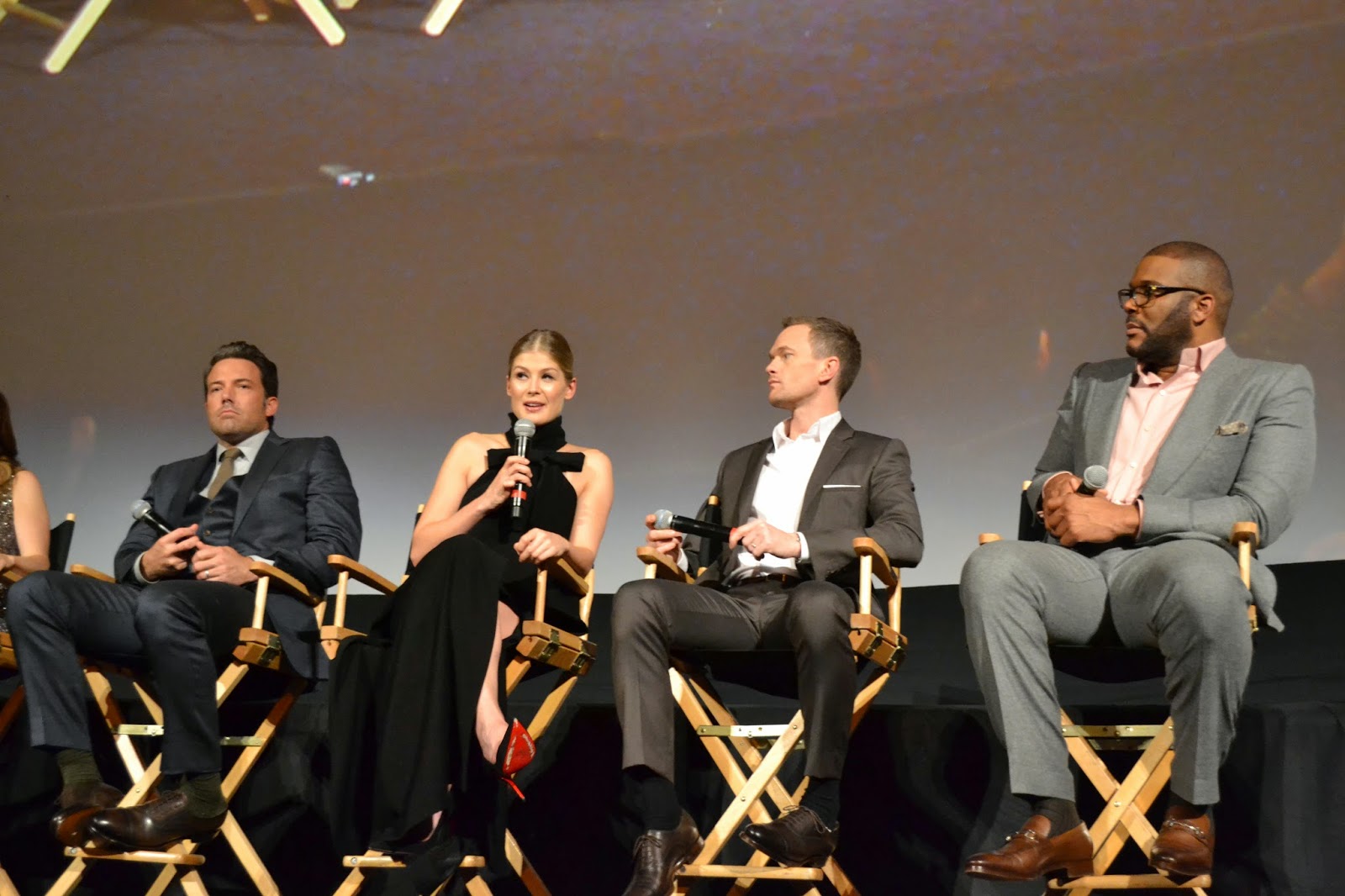 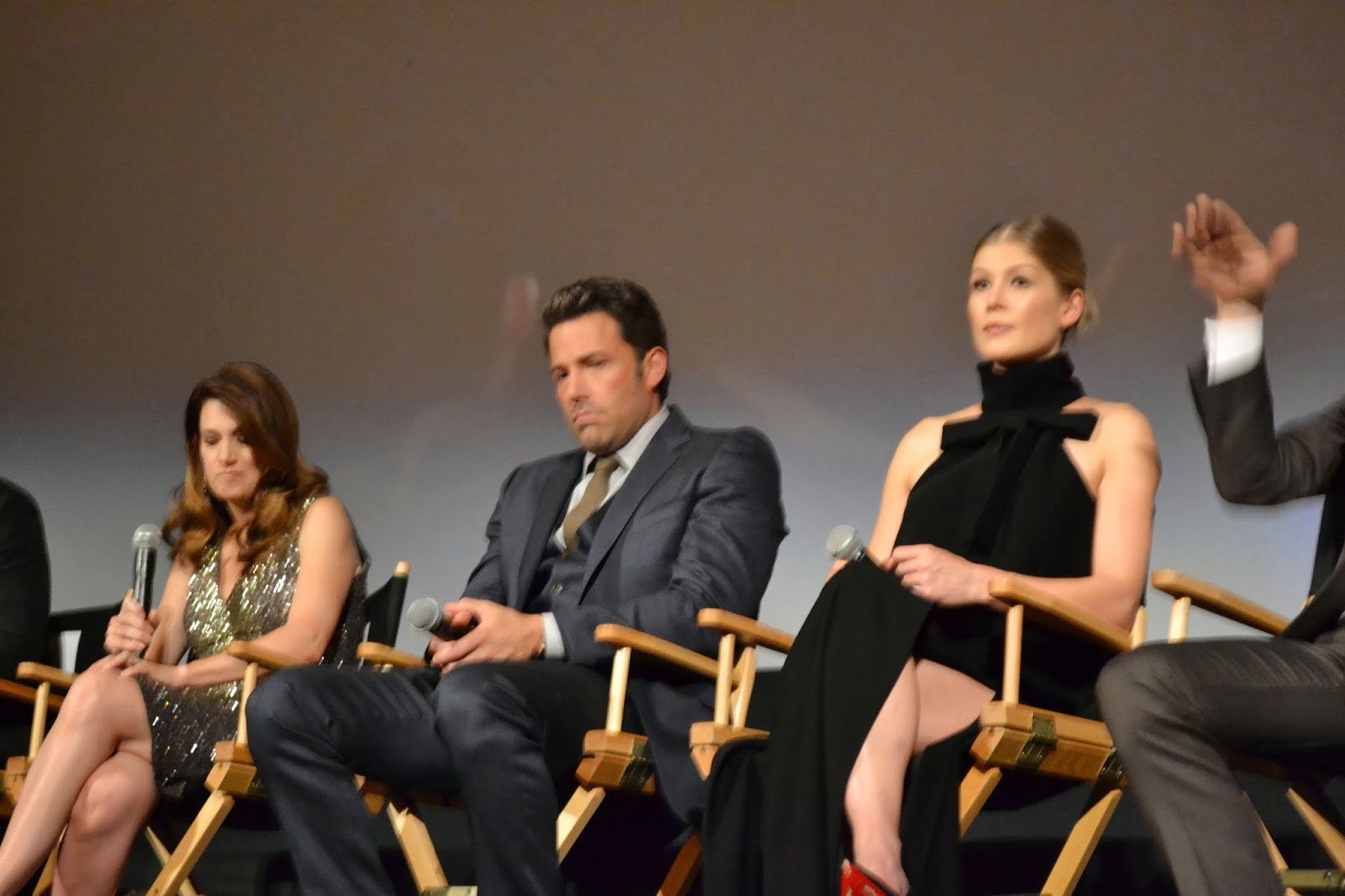 With Author and Screenwriter Gillian Flynn 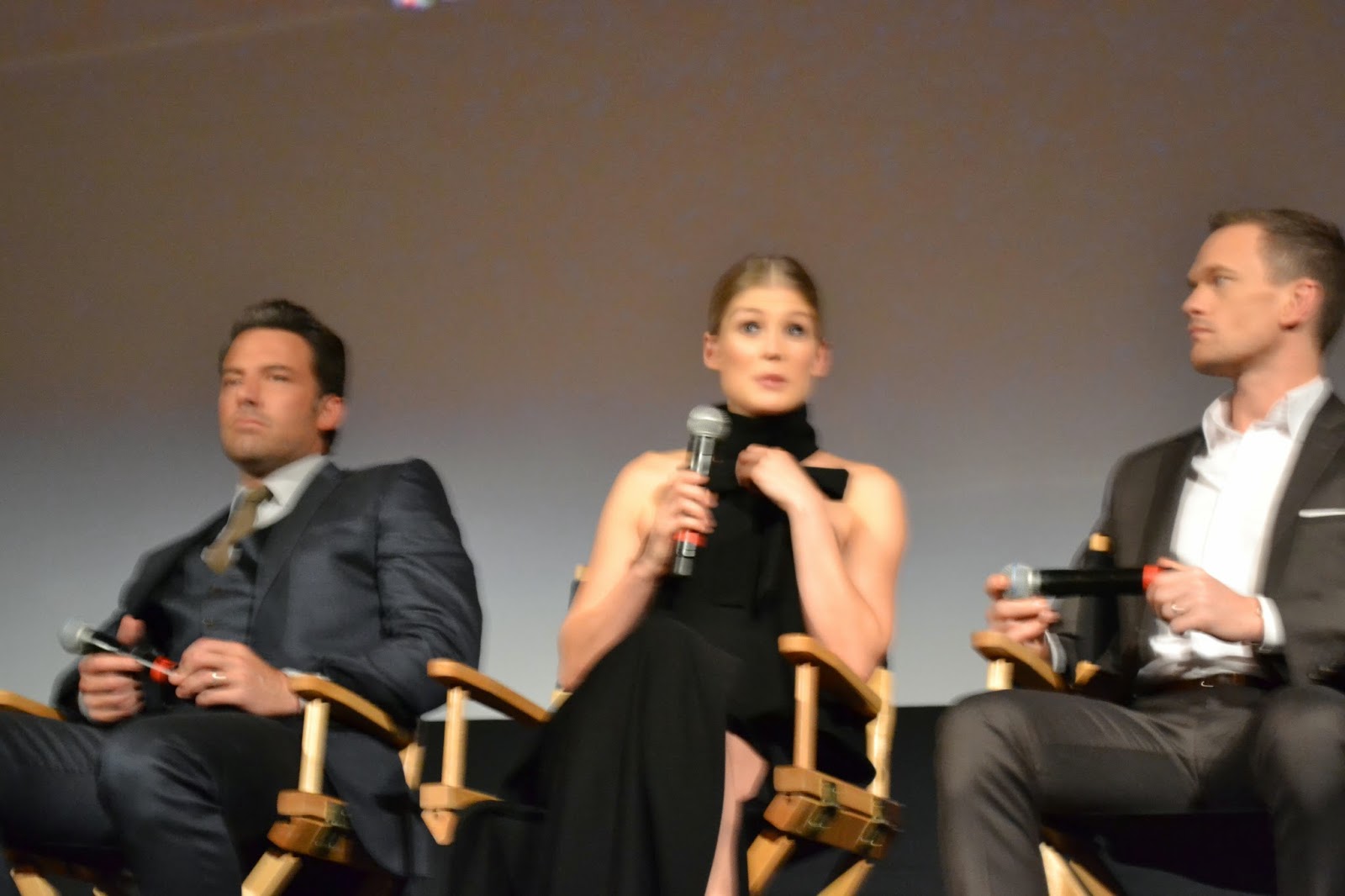 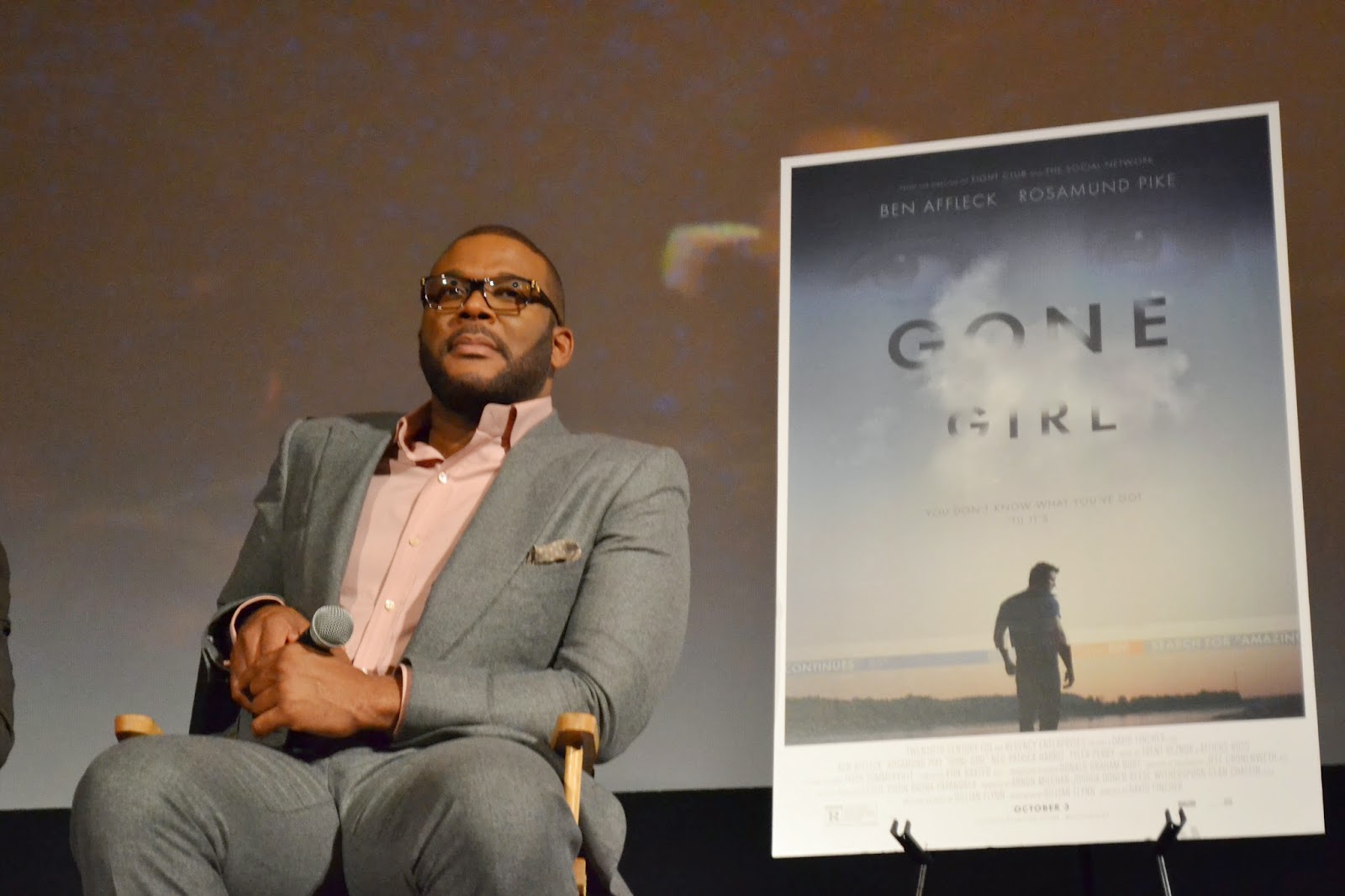 Tyler Perry fields a question from a reporter 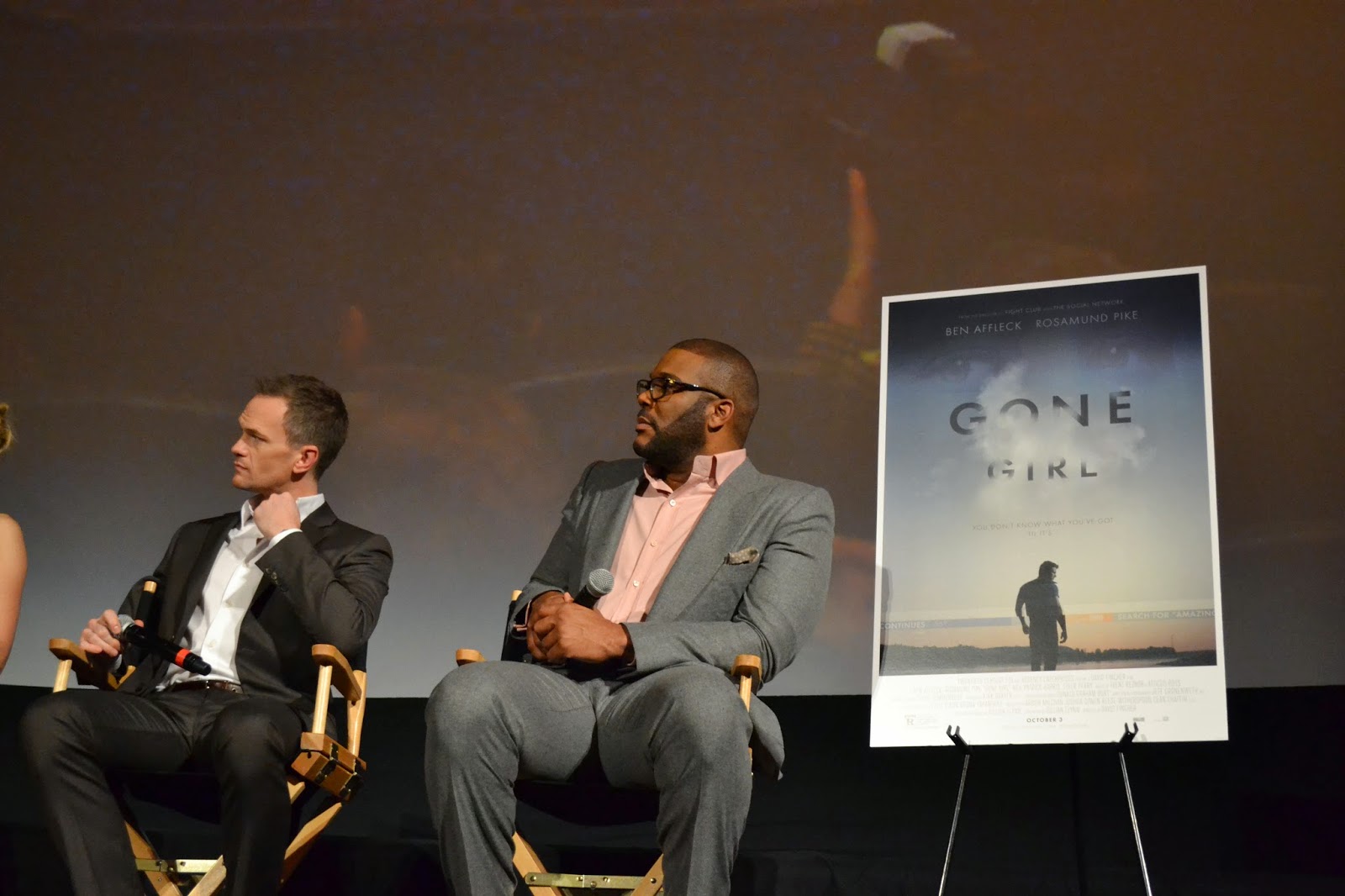 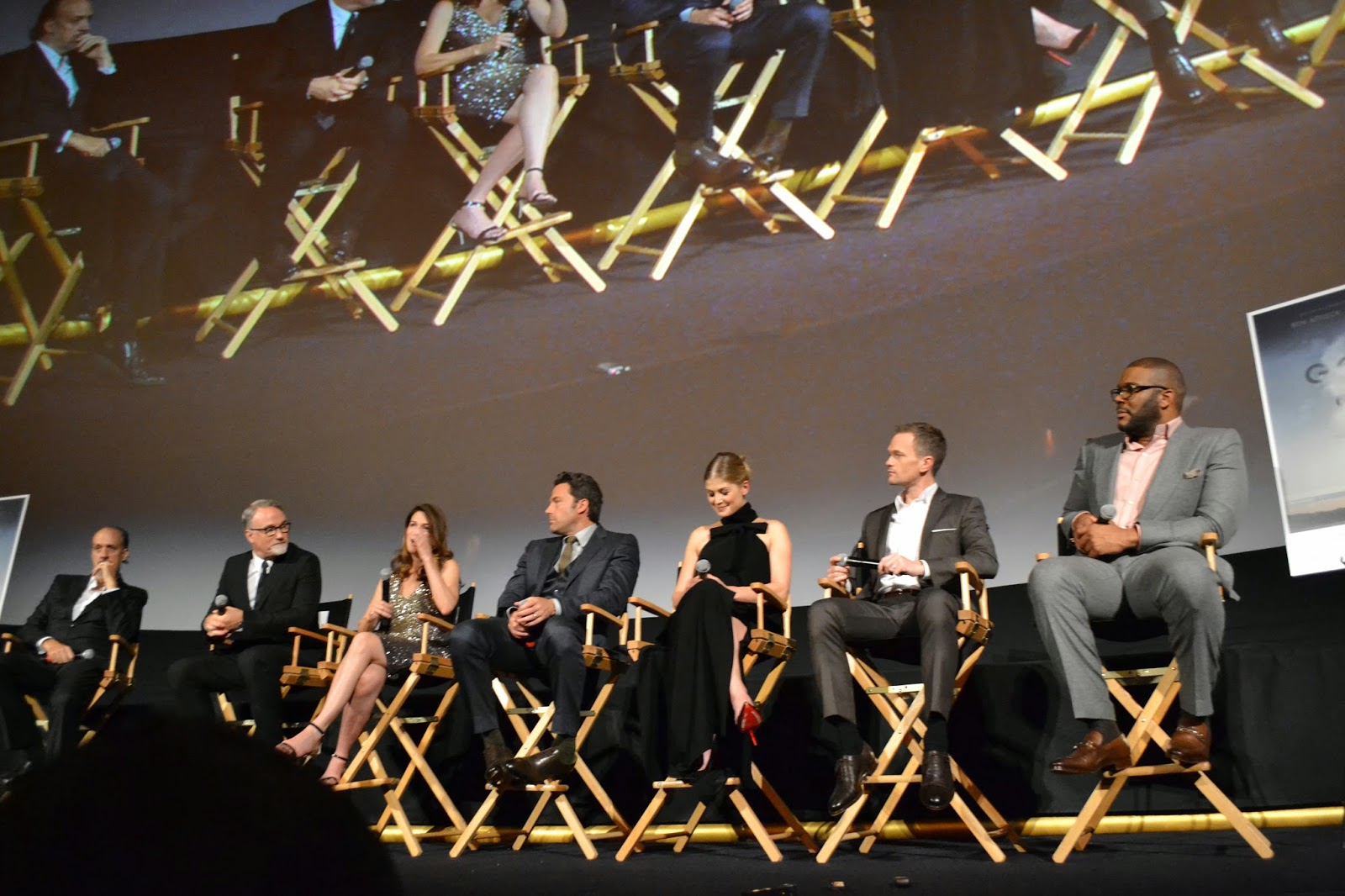 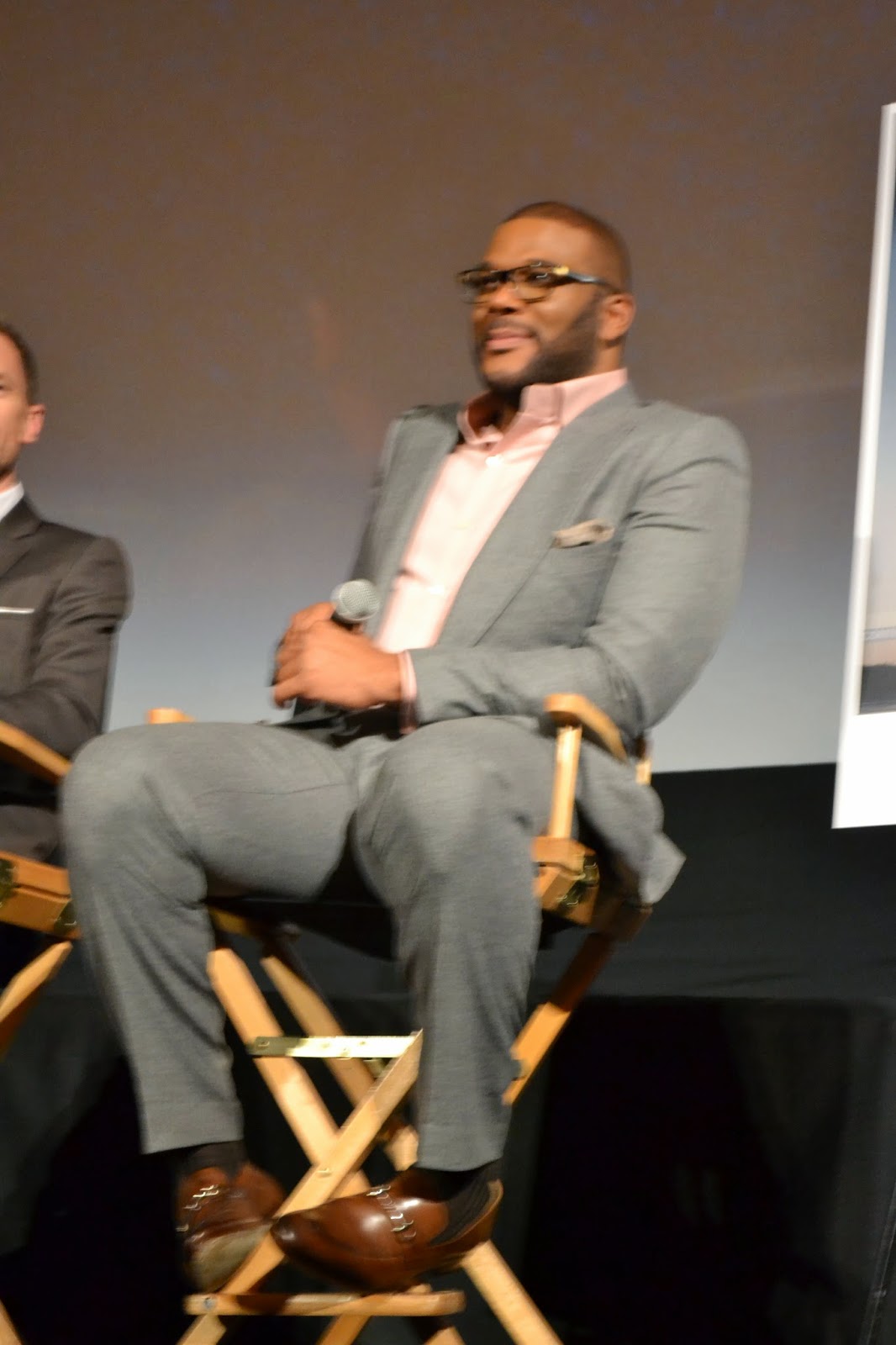 Below: Ben Affleck responds to a question 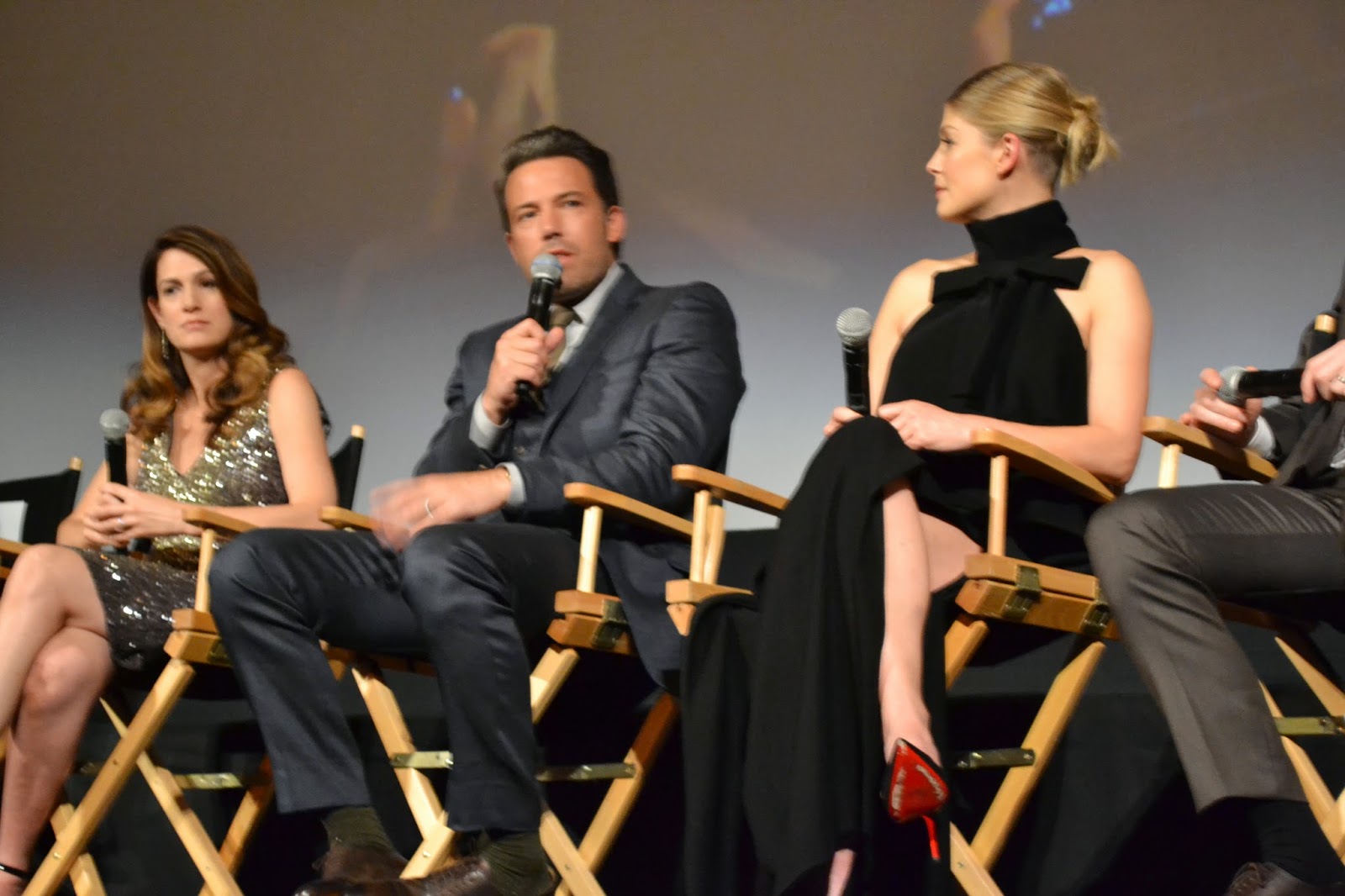 Posted by Dwight the Connoisseur at 4:50 AM