NEW YORK--Music Director Alan Gilbert unleashed the full creative forces of the New York Philharmonic with an ingenius program that best exemplifies his raison d'etre. Opening with the Subscription Concert Debut of Unsuk Chin's Clarinet Concerto with Finnish virtuoso Kari Kriikku, the program closed with an impassioned reading of Mahler's Symphony No. 1 in D Major. Forget the acoustical deficiencies of Avery Fisher Hall. Gilbert and company delivered a performance that would make even the most die-hard critic stand up and take notice.

To say that Chin's Clarinet Concerto is technically challenging is an understatement. She searches for notes and melodies in places where there are none to be had. "  there's something unique about the way she combines traditional souns and instrments to create something utterly fresh and modern. "She also has the uncanny capability to write music that creates colors," Gilbert expounded.

Gilbert's handling of the Mahler only served to show the deep rapport he has developed with the orchestra. Cues were given with the slightest wave of the hand or a subtle bend of an arm. The simpatico is at times almost subconscious. Houdini could not have done it better.

Mahler's Symphony No. 1 is a masterpiece of thematic development.  A simple bird call from the woodwinds is later developed into a full-blown theme for a movement.  A mere flourish by offstage brass is later the entre' to a rousing finale complete with pounding timpani, crashing cymbals and exploding trumpets. Not since Sir Georg Solti have I seen so diifiicult a piece performed with such aplomb.  The news reported some weeks ago that the Philharmonic extended Gilbert's contract. Wise move. He's a keeper. 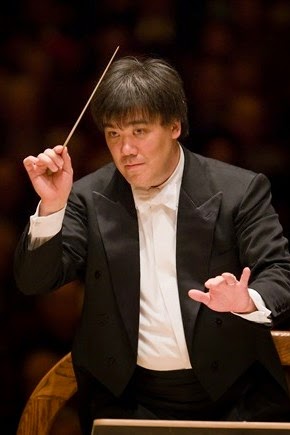 
Posted by Dwight the Connoisseur at 9:37 PM