The pre-Broadway opening of Broadway In Chicago's new production of "First Wives Club" at the Oriental Theatre (through March 29, for tickets, visit BroadwayinChicago.com) had all of the glitz and glamor of the Great White Way. Complete with a pre-curtain Red Carpet and a gaggle of local media and paparazzi outside and a packed opening night crowd inside, expectations were high and the musical action that unfolded onstage did not disappoint.

This is not Strindberg, or even Neil Simon, but this second attempt at a musical version of the runaway hit 1996 Parmamount Pictures revenge comedy makes for one thoroughly satisfying evening. Complete with a book re-written by TV powerhouse Linda Bloodworth-Thomason of 'Designing Women' fame (based on the hit novel by Olivia Goldsmith) and a 'soundtrack of our lives' score by Motown hit-makers Brian and Eddie Holland and Lamont Dozier, this is a toe-tapping, uncomplicated romp that somehow makes the weighty subject matter of suicide and infidelity tongue-in-cheek fun.

Although its a little hard to shake the spectre of the powerhouse cast of the film version (Goldie Hawn, Beth Midler and Diane Keaton), the Broadway in Chicago cast, tony Award winner Faith Prince (as the sarcastic Brenda, Carmen Cusack (Elphaba in the national tour of Wicked and standby for the same role in the Chicago production) in the Keaton role of the sexually repressed Annie and local Jeff Award winner Christine Sherrill as the alcoholic diva Elise, hold their own in a fast-paced production, directed by Simon Phillips (Priscilla, Queen of the Desert Musical).

There are plenty of stock sitcom puns (some groaningly telegraphed) and familiar Motown tunes ("Stop in the Name of Love," "Sugar Pie Honey Bunch") and sanitized sexual humor to hold your attention during the nearly two and a half hour (with intermission) production. There's even a sentimental moment or two (Whirlpool of Memories, One Sweet Moment)

The male characters don't get much to work with, but then, they're not intended to be much more than dart boards, with the exception of Patrick Richwood as the gay hair stylist Duane, who acts as the loynch-pin for the plot. He nearly steals the show!

The choreography by David Connolly keeps things moving at a nice pace and there are a couple of show-stopper songs (Payback's a Bitch, I am Duarto) that make it recommendable.
Through March 29. Visit BroadwayInChicago.com. 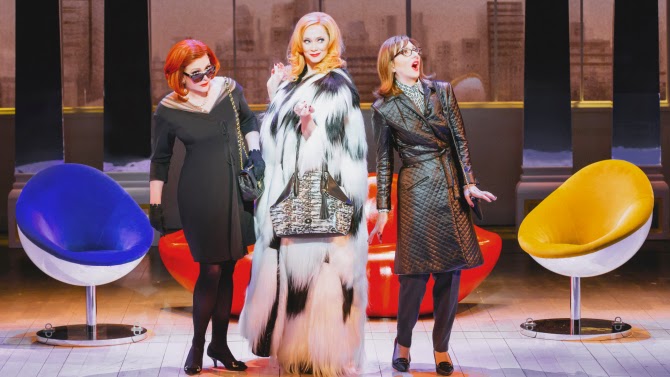 Posted by Dwight the Connoisseur at 5:16 AM