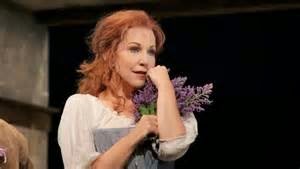 Wednesday night, March 18,2015 is a night that lovers of bel canto opera will mark as one of the high points of the current Met Live HD opera season. That is when they will have witnessed one of the great performances of the Met's first production of Gioachino Rossini's La Donna del Lago (The Lady of the Lake). The opera is an homage to Bel Canto, the art of beautiful singing and the Metropolitan Opera's new production starring Joyce DiDonato in the title role and Juan Diego Florez as the Scottish King who pursues her, is a brilliant capsulization of everthing the composer had in mind. DiDonato is captivating as the red-haired maiden, torn between her sense of duty to fulfill an arranged marriage to Roderick, the leader of the rebels, and her true feelings, her love for Malcolm, a loyalist. She is renowned for her portrayal of bel canto roles, and this may be one of her finest performances.

The new production is headed by Scottish director Paul Curran and is based on the lengthy narrative poem of the same name by Sir Walter Scott. Scott's writing is also the inspiration for Lucia di Lammermoor, which premiered at the Met on St. Patty's Day. In the pit is conductor Michele Mariotti, who hails from Rossini's native Pesaro, Italy. Perhaps that explains his firm grasp of Rossini's spirited material.

Daniela Barcellona, with her rich, mahogany toned mezzo voice, brought a special nobility to the 'pants role of Malcolm (the male characters all wear kilts, a sort of plaid skirt for men). Her love duet with DiDonato was particularly arresting. There's even a kiss at the end that was genuinely touching. John Osborn had a ringing heroism in his voice that really brought the role of Rodrigo to life. Juan Diego Florez was ever the dashing and impassioned tenor as the king in disguise. He tossed off the most difficult vocal runs as if they were written just for him. Oren Gradas portrays Elena's father Duglas D'Angus with appropriate gravitas.

DiDonato as Elena, displayed her distinctive dramatic chops. When  she is called upon to present herself to her betrothed, she wordlessly conveys her sense of conflict and trepidation. "The ladies silence speaks eloquently," one of the characters said of her during the scene. Truer words were never spoken.

The sets and costumes by Kevn Knight evoke the atmospheric environment of medieval Scotland, while the lighting design by Duane Schuler and projection design by Otto Driscoll, work in concert to create the Romantic era's fascination with civil-war conflicted Scotland. One particular scene, which depicts severed heads mounted on staves, brings a forboding clarity to the uncertainty and brutality of the time. "The same is true today," was the spontaneous comment of one of my seat mates in a veiled reference to the current ISIS terror.

Vocally, everyone holds their own and that is the sole reason this opera works so well. The plot takes a back seat. I didn't even bother to read the subtitles. Doing so distracted from the beauty of the vocal performances and believe me, they'll have you begging for more, even with a three and a half hour run time. Visit metopera.org or fathomevents.com for tickets.

Posted by Dwight the Connoisseur at 11:56 PM