NEW YORK--Joshua Bell is one of the musical wonders of the world. Currently, he is one of the most recorded and honored artists in the classical music realm. He has more than 40 CDs to his credit and has won numerous awards, including the Grammy, Mercury and Gramaphone awards.

He was named music director of the eponymous Academy of Saint Martin in the Fields, the first person to hold that position  since the orchestra was formed by Sir Neville Mariner in 1958.

A native of Bloomington, Indiana, he received his first violin at the age of four and began studying with Josef Gingold at Indiana University at age 12. He made his Carnegie Hall debut at 17 years old.

So it was with great anticipation that the audience at AliceTully Hall in Lincoln Center awaited his arrival  on stage with his 1713 Huberman Stradivarius and piano accompanist Sam Haywood, a respected solo artist in his own right, for a program of Beethoven, Grieg, Brahms and Bartok.

Alice Tully Hal is a jewel box of a venue. With its interior walls lined with muirapiranga wood,the hall is acoustically perfect. it's like sitting inside a Steinway piano. There are no bad seats, as sightlines are perfect throughout.

Unless you are a musicologist, you may not be aware that Beethoven was a brilliant violinist as well as piano virtuoso. Although lesser known, his violin sonatas are as prized by violinists as are his piano sonatas by pianists. Bell made a strong case for the composer's Violin Sonata No. 4 in A minor, laying out its myriad themes and allowing them to ring in the air while they were emulated on the piano. The theme fragments unfold in orchestral fashion, darting in and out, building in intensity to an energetic conclusion. Bell maintained the piece's dramatic tension without ever losing sight of the melodic ideas at its epicenter.

Edward Grieg's chamber music is as obscure as his piano concertos and orchestral suites are revered and celebrated. His Viiolin Sonata No. 1 in F major is thematically as beautiful as any of his better know work and Bell used his mastery of the Stradivari to caress each note. Pianist Haywood's sensitive introduction of the final theme established the framework for some highly emotive playing by Bell, who brought passionate expression to the finale.

Brahm's Sonata No. 1 in G major is full of bright, sunny motifs that perhaps mirrored the audience's desire for the start of spring in the midst of New York's winter chill. Bell provided plenty of warmth in his ringing tone and deeply moving expression. The alternating themes between piano and violin were enthralling with Bell navigating the tricky melodic patter of the final movement to a soft, burnished conclusion.

The Bartok Rhapsody No. 1 for violin and piano was all a showcase for the considerable skill of both Bell and Haywood. The music is all whirling Hungarian folk dances and Bell/Haywood found its rhythmic  center and reveled in it. 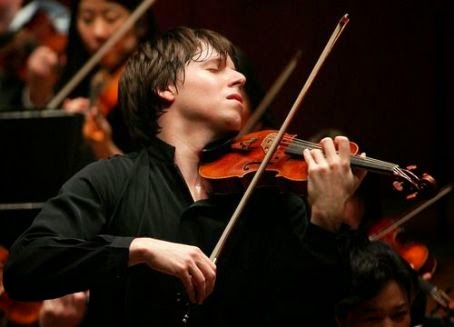 Posted by Dwight the Connoisseur at 2:10 AM