Opened theatrically July 10 and in VOD 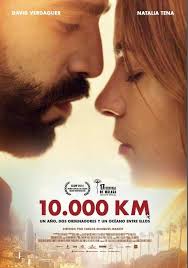 Increasingly the computer is becoming both the grafter and sustainer of relationships as society becomes more immersed in the cyber-culture of Facebook and Twitter. Individuals are more likely to find romance, real or imagined, in the confines of their home or office on the computer screen, than they are in the brick and mortar world of a bar or a health club.

Alex is an ambitious photographer who left her cozy roots in London to live with Sergi, a native of Barcelona, struggling to pass the state board exams to become a teacher, his only prospect of job security. The two are in their early 30s, and from the passion of their early Sunday morning sex, appear to be deeply in love. There's even pillow talk of having a love-child together. That warm and fuzzy little bubble quickly gets burst when Alex reveals that she's just been granted a long sought after fully-paid, year-long residency with a photography studio in LA that will catapult her dormant career. Sergio, somewhat of a traditionalist, is none too pleased with it. Although he won't say it, he's pissed and has no desire to see Alex fly off thousands of miles away to pursue her dream, especially when compared to his modest ambitions which seem to be in a state of arrest.

Director Marques-Marcet does an excellent job of conveying the unstated, but deeply rooted emotions of the character's displeasure with each other. While Sergi gives his verbal, if begrudging, approval of Alex's planned move, he forcefully scrapes at his morning toast, almost reducing it to crumbs. When  Alex senses his displeasure, she too starts the same aggressive toast scraping. You can cut the silence between them with a knife, save for the incessant and intensifying sound of  toast scraping.  Masterful! 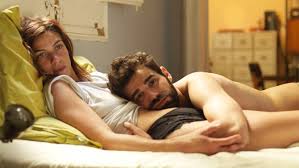 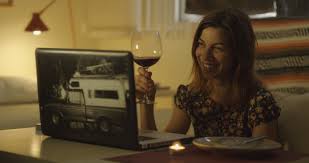 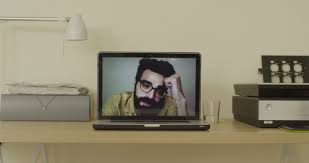 Marques- Marcet wisely places the entire story in the stifling realm of the couple's tiny living spaces; Sergi's cluttered apartment in an ancient building in the heart of Barcelona, and Alex's  IKEA furnished, mental halfway house sterile apartment in West LA. The outside world is merely referenced in the couple's dialogue  (Sergei encourages Alex to get out and mingle more, exploring her new environment and meeting new friends). Only the stark LA streetscapes Alex shoots with her camera for her studio projects, Google maps and tours of Alex's neighborhood via laptop camera, provide glimpses of the world outside. The film eventual settles into the couple's Skype video chats across thousands of miles, in which they try desperately to keep alive the flickering flame of their tentative romance.

The number of days of separation are noted in title-frames in between scenes. As the relationship wears on, there's increasing frustration and bickering over small misunderstandings. There's also evidence of at least one infidelity on both of their parts. Sergio awakens in the altogether one morning and groggily retrieves a used condom from the bedroom floor and walks into the bathroom to dispose of it. He then rolls and smokes the obligatory afterglow cigarette while staring blankly out of his balcony window. She starts frequenting a local dance club in LA and appears to be shaking off the regretful afterthoughts of the previous evening's tryst in one of their skypes. Her indiscretion is unstated, but woefully apparent, though neither party speaks of it. With time wearing the fabric of their relationship thin, and Sergi digging in his heels about staying put, its obvious that their long-distance relationship is unravelling.

The cyber-chat scenes become progressively revealing and desperate, as the couple tries to literally reach through the screen to maintain the intimacy they once shared. There are shared meals, even a cooking lesson via Skype (Alex is a terrible cook. She can't even slice an onion)  and, yes, the inevitable internet love-making session  that puts the "I'll have what she's having" scene in "Sleepless In Seattle" to shame!

There is some evidence that the relationship is starting to wear thin, even as the couple invests more energy in their cyber sessions. We see Sergi awaken one morning in a stupor, only to retrieve a well-used condom from the floor. (It's also one of the rare instances that this reviewer can remember seeing male genitalia exposed in an R rated film, although fleeting.) There's also a veiled reference to Alex having an affair after a dance party in her newfound home of West LA.

The cyber-chat between Sergi and Alex is at times humorous and tender, but also disquietingly uncomfortable. When Sergi starts to pleasure himself at the conclusion of their cyber-sex session, it's too embarrassing for Alex to watch and she shuts her laptop. We quickly realize that sex is one of those things thats pleasurable to experience but sometimes painfully uncomfortable to watch, especially when someone you're intimately connected with goes off on a personal tangent.

As with any cyber-relationship, the buildup created by the long-distance yearning, can often result in a let-down when the two parties come face to face, and that is exactly what happens when Sergi finally breaks down and decides to travel thousands of miles to visit Alex.

Her apartment, he observes, is much smaller than he imagined. We see her posturing, standing guard near her kitchen stove, as if subconsciously protecting her space against this strange intruder that is suddenly invading her space. Only the introduction of a bottle of whiskey, brought by Sergi as a belated housewarming gift, serves as an ice-breaker that plunges the couple into drunken sex, which alternates between the savage and sublime. The moment is fleeting and empty, leaving them both bereft.

"10,000 Km" moves at a deliberate pace, allowing the inner-dynamics of the relationship to build. It's a carefully crafted film that puts the subject of internet-based relationships squarely out there for all to examine. As computers and the internet hold out promise to increasingly become  the platform of human interaction, the film asks the question, can they effectively become the glue that binds us together in our societal and interpersonal relations, or do they only drive us further apart.

Note to film producers and editors: The all-white subtitles were difficult to read, especially in the crucial, plot-building opening scene, which was all set against the white of her undershirt and later,  against her all-white apartment and the sun-bleached streets of Los Angeles. A lot of the dialogue of the film was literally 'lost in translation." 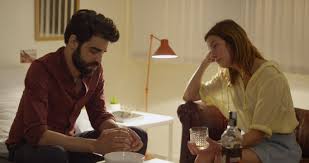 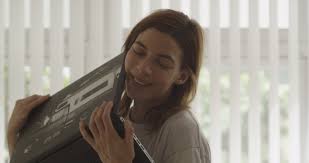 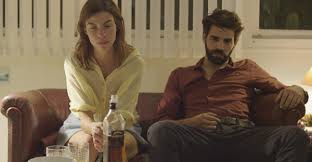 Posted by Dwight the Connoisseur at 5:06 PM