"Tangerine" a Raw, Heart Rending Look at Transgender Life on the Edges

"Tangerine" a cinematic masterpiece shot entirely on the iPhone 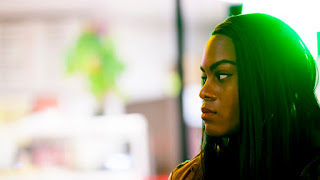 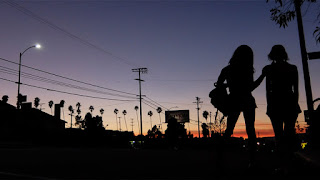 "Merry Christmas, Bitch!" is the opening line, and that should tell you everything you need to know about where this new film by Sean Baker (Statlet, Prince of Broadway) is heading. "Tangerine," is a raw, melancholy, sometimes comical look at the lives of transgender prostitutes living in the underbelly of West Hollywood's taciturn streets. It's the indie hit of the year and deserving of all the accolades and buzz its getting, both for its edgy subject matter and the new technology involved in its creation.  Shot entirely on an iPhone 5s (with a special prototype lens from tech startup Moondog Labs, and additional apps and post-production techniques that give it a saturated film-like look), the film breaks ground on two levels; first, because of its compassionate look at an often maligned segment of society, and its audacious, groundbreaking use of new technology, which allows young filmmakers to use a device that is readily at hand (although with enhancements) to produce a film at a fraction of the cost (a mere $100,000) of using standard film or high definition video. If nothing else, this film and the promise of its new technology will propel the art of indie films light years ahead.

Director Sean Baker delivers a film with a captivating, mouth-watering look and plenty of heart. You can feel the genuine angst of the characters beneath all those layers of makeup and fake Korean weave-shop hair and almost feel a tear or two well up inside as they recount their foibles and disappointments,  in a matter that is both tragic and comic. They're all like the clown who makes others happy while all the while there are tears inside.

Baker takes us down the trash-strewn streets, inside the lonely diners, 'no-tell' motels and front seat taxi trysts that are the hallmark of West Hollywood, all on one Christmas Eve night in the life of transgender prostitute Sin-Dee Rella (Kitana Kiki Rodriquez),  just out of jail on the Night Before Christmas, who learns that her pimp/boyfriend Chester, (the mercurical James Ransone, in a standout humorous performance) has been cheating on her while she was away with a local 'fish,' transgender slang for a heterosexual woman, named Dana (or Desiree or Dinah), Sin-Dee isn't quite sure of her identity, but she has a pardon for her anyway and is determined to find her and exact revenge.

She enlists the reluctant aid of her good friend and confidant Alexandra (Mya Taylor, in another breakout performance that reaches right for your heartstrings. There's an intriguing subplot involving an Armenian cabbie (Kareen Karagulian), who is Sin-Dee's cheapskate regular client, who comes to have a thing for her and ditches his family on Christmas Eve in order to seek her company. It all ends up in a pathetic scene at a local club where Alexandra fulfills her life-long dream to sing Victor Herbert's "Toyland," albeit to a crowd of only three. It just brings home the hollow emptiness of her life.

There are some unforgettable madcap scenes; the headlong search for Chester, the almost-slapstick confrontation at the local hangout, Donut Time, where the search for Chester and the fallout between the Armenian cabbie and his family's strict, moral and cultural values, all collide in comedic fashion.

It all ends on a tender note, with Alexandra and Sin-Dee attempting to pick up the pieces of their pointless lives in a deserted laundromat and the Armenian cabbie, bereft of his family, sitting in lonely dejection in an empty house by the Christmas tree. It's the Christmas movie for our time and one that commands our immediate attention.