Now available in iTunes, You Tube, VUDU, Google Play Movies, Amazon, and in select theaters including: 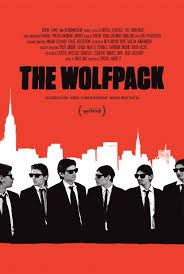 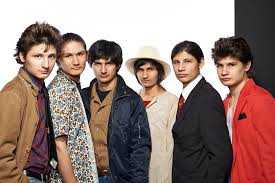 "THE WOLFPACK," independent filmmaker Crystal Moselle's first full length documentary (recent projects include the series "Something Big, Something Small," featuring Pharrel Williams, Aurel Schmidt and Shepard Fairey, picked up by The New York Times, "Excavating Taylor Mead," a documentary portrait of the downtown New York artist and Warhol Superstar, which was part of the 2006 Whitney Biennial), is a somewhat free-form look at the lives of the six Angulo brothers, raised by their parents while locked away in an East Village apartment, whose only contact with the outside world is through film. It's a realistic look at a subject that cuts to the heart of the role of film in society and its psychological influence, and is a case study of the intersection of film and reality.

It was filmed over a five year period, when the boys began their foray into the outside world. Director Moselle first encountered the boys by happenstance, following them as she was cruising down First Avenue in the East Village and noticed a band of teenaged boys with long hair weaving in and out of the crowd.

She chased them down and began questioning their identity. Initially distrustful, she began to gain their confidence through their mutual interest in film. Their  friendship was  based on their interest in learning more about the business of filmmaking. She began by showing them her cameras and equipment. Gradually, she further gained their confidence by teaching them the filmmaking process. Four months in, they allowed her to come into their home to begin filming. The depth of their story then began to unfold.

Bhagavan, Govinda, Narayana, Mukunda, Krsna and Jagadisa all have names derived from the Hare Krishna Center in West Virginia, where their parents, Susanne and Oscar Angulo, lived during the first years of their marriage. A daughter, Visnu, the oldest and only girl of the siblings was born there in 1990. She is mentally disabled and was not included as a subject in the film.

A word about their parents. Susanne, a hippie from the Midwest, met Oscar Angulo, an aspiring rock star,  while traveling in Peru on the road to Machu Picchu. Oscar offered to lead she and her friends.  Along the way they fell in love and moved to the States. After traveling the world, they settled into the Hare Krishna Center  where first Visnu and then Baghavan, the eldest son, was born. Twins Govinda and Narayana were next.

The family then traveled the country in search of music opportunities for Oscar. While still living in the van, Mukunda was born in LA.    Hearing that there was cheap housing to be had in New York, the family moved to the Bronx and Queens, then to Brooklyn. Gunshots became part of the daily soundtrack of their lives. The parents then became fearful for their children's safety.

Moving to the projects in Manhattan's Lower East Side, the father forbade the mother and children to leave the house on their own. Thus began their odyssey into social isolation.

Susanne Angulo became the educator and provider for the family, supporting them on public aid. Oscar Angulo continued his futile search for a music career.   Along the way, he managed to teach all of his children music and impart to them his deep devotion to world religion and philosophy.

As long as the children were little, it all went swimmingly. At least once a year, particularly during the summer months, the family ventured into the outside world. But one year, Oscar locked the door for good.  That's when the seed of rebellion was planted in Mukunda, the Alpha male of the pack.  He was the first to break out of the apartment disguised in a Michael Meyers mask. 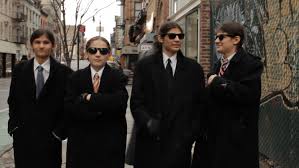 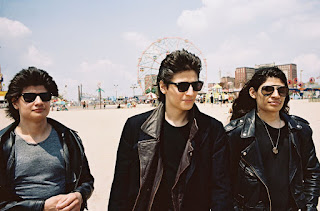 The rest of the film recounts their complete absorption of the dialogue, culture and style of the films Oscar brought home.  It's odd, one would think, that a father so protective of his children, would expose them to the very pop culture and society he is shielding them from, but, there it is.

Dad brought home both classic and cult films. The more violent, horrific and complicated the film, the more the boys seemed to like them.

PULP FICTION was the first film they saw together on television. That began an obsession with all things Quentin Tarantino.

Film led them to fashion their wardrobes and their personalities into the characters they saw. Oscar would bring them clothes he'd found on the street and at the Salvation Army. The boys, aged 11 to 18,  would  fashion them into makeshift costumes based on their favorite characters. A pair of beat up old tennis shoes would be taped with a blue Nike swoosh to look like Marty McFly's, an old woman's rain coat would be cut up and re-sewn to resemble Mad Max's leather bike vest.

Filmmaker Moselle described the lengthy filming process as somewhat of a rollercoaster. She said it took several years for the boys to finally open up and show their more tender side. She said her experience in working with teenagers in general helped her to weather the ups and downs of the project. In between, she worked on other short film projects, including commercials and music videos, and even filmed an artsy short on the boys called "Lightning People" for Nowness.

Besides winning the U.S. Documentary Grand Jury Prize at Sundance,  Moselle is also a Tribeca Film Insttute grantee. At last spring's Tribeca Film Festival, she and the Angulo brothers walked the Red Carpet and did a filmed homage to Tribeca's co-founder, Robert DeNiro, reenacting scenes from Goodfellas(1990), Mean Streets (1973), Analyze This (1999) and Taxi Driver (1976). The brothers got to walk the same red carpet as their filmatic hero and to drop enough F-bombs to make even Harvey Keitel raise the hair on his now-famous pompadour. "You talkin' to me?!" 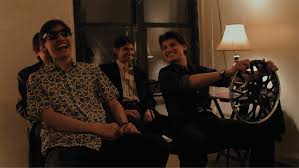 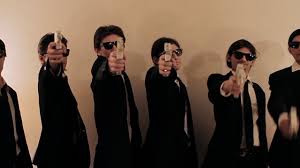 Surprisingly, she said, their parents were open to the idea of documenting their family; perhaps seeing the opportunities it would open up for their children. In fact, a couple of the boys are actively pursuing careers in film or related endeavors.

THE WOLFPACK is a fascinating and unvarnished intimate portrait of an extraordinary family. Moselle was not only privy to the family's inner sanctum, she also had unprecedented access to their  vast archive of home movies, which documented the boy's on camera mimicking the characters and dialogue of the films they watched.

The more ominous questions of spousal and child abuse and involuntary confinement are faced head-on, but, as Moselle noted in subsequent interviews, the boys seemed rather well adjusted in spite of their unusual upbringing.  That fact, more than anything, speaks to the transformative power of movies. 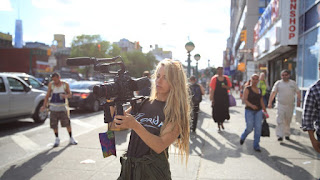 Posted by Dwight the Connoisseur at 9:12 AM