HENRY GAMBLE'S BIRTHDAY PARTY is a film that deals with a rather weighty subject; a teenaged boy coming into the reality that he's gay, with a delicate balance of humor and humanity. Though it approaches a serious matter and has a message, the film's director , Stephen Cone doesn't  hit you over the head with it.

The plot unfolds over a single day as Henry and his family, in their Evangelical Christian world, prepare for his 17th birthday party. His mother is a 40-something single mom, who doesn't quite know what to do with her two nearly grown children. Henry, himself, is not quite sure of which way he wants to go in terms of choosing partner amidst his burgeoning sexuality.

The film opens with Henry (Cole Doman) and his brest friend Gabe (Joe Keery) holding a masturbation session as they talk about their imagined conquest of a local girl. The two wind up downstairs with their Evangelical circle of church leaders and friends, holding hands in a prayer circle. The irony of the scene is stunning. That seems to be the tone throughout, with an odd mix of family, friends and church leaders passing in and out of slamming doors, drinking and watching forbidden soft porn on cable and getting in fights fueled by sexual jealousy; it's all so pathetic and hilarious at the same time and yet, so gloriously human. At the end of the day, everyone winds up swimming in the family pool, which is sort of a metaphor for life itself. That's the beauty of this film. We can all see ourselves in these pitiful, yet heroic figures, who are all grappling with their own inner demons and insecurities, yet holding their heads up in spite of the frailties and outright bumbling. Even Henry himself, in his final scene, approaches his own destiny with an awkward self-doubt. In the end, we've all been their at one time some point in our lives, and that's precisely what makes the film so magical and endearing.

HENRY GAMBLE'S BIRTHDAY PARTY DEBUTS ACROSS ALL DIGITAL PLATFORMS TUESDAY MAY 3rd INCLUDING  iTUNES, VIMEO ON DEMAND AND WOLFEONDEMAND.COM AND DVD VIA WOLFE VIDEO AND MOST MAJOR RETAILERS 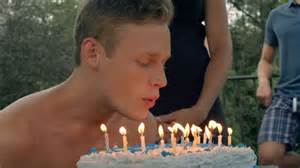 Posted by Dwight the Connoisseur at 4:28 PM