WYNTON MARSALIS IN WORLD PREMIERE OF HIS SYMPHONY NO.4, THE JUNGLE WITH NEW YORK PHILHARMONIC 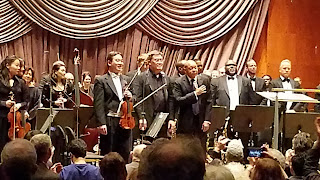 Marsalis's enlisted the aid of the core musicians from his formidable Jazz at Lincoln Center Orchestra to meld with the entire New York Philharmonic to present a dazzling mix of jazz, blues and swing with a tinge of modern-day classicism in virtual tone-poem to the bustling energy of America's largest and most diverse city. Pared down by one movement to a manageable 50 minutes, the symphony nonetheless cut a gigantic swath in the pages of the orchestra's history, the strains of which will echo for generations to come.

Marsalis chose not to merely remain on the sidelines and step forward at the end of the performance for some well deserved accolades, instead he sat in with the orchestra to deliver some blistering and revelatory solos.

Beginning with The Big Scream (Black Elk Speaks), the work sets out a musical vocabulary that speaks volumes about the trials and tribulations of urban life, through the city's birth as Native American, to its growing pains as a social laboratory in a tiny petrie dish. The Big Show is a Broadway-like tribute to the musical cultural stew that ensued over the centuries, with ragtime, the turkey trot and European immigrant music forms alternately colliding and blending in a cacophony of sound.

Lost in Sight (Post Pastoral) contrasted some beautifully pithy and mournful blues passages with lush strains of jazz and reverberating orchestral notes to cast the plight of the invisible poor and homeless in bas relief. Evocative passages that interwove snatches of traditional hymns into a Bach-like classical motif created the most haunting and memorable moments of the evening.

Marsalis' concluding shouts, bellow and screams, utilizing his multi-faceted skills on the horn riveted the piece into an unforgettable experience.

The work was preceded by two other modern works, Aaron Copland's compelling Quiet City, Grace Shryock, English Horn in her New York Philharmonic Solo Debut and the orchestra's Paul Levin Chair Trumpet Christopher Martin as soloists. Copland's piece is among the most sampled of modern classical compositions in films, commercials and music videos. It was nice to hear it in its complete form. The work clearly shows how Copland defined the distinctive "American Sound" in modern serious music and cemented his reputation as the "Dean of American Composers."

The program repeats on Tuesday, January 3 at 7:30pm. Visit nyphil.org for details. 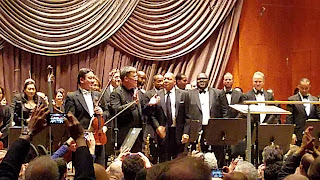 Posted by Dwight the Connoisseur at 6:33 AM