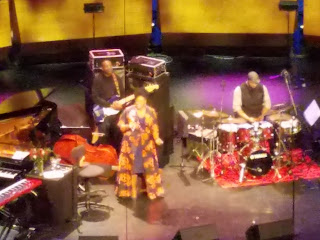 Incredible vocal prowess and deep introspective emotion marked a Valentine's Weekend set at the Rose Theater at Jazz at Lincoln Center. It was one of the most moving jazz performances in memory, perhaps equal to latter-day performances of her muse and musical mentor, Sarah Vaughan. Reeves along with her stellar quintet, featuring Peter Martin, Music Director on piano,  Romero Lubambo on acoustic an electric guitars, Gregoire maret on harmonic, Reginald Veal on electric and acoustic bass, and Terreon Gully on drums, creating a magical evening of jazz improvisation that eschewed pyrotechnics and showiness for real honest music- making that reached to the depths of the soul. Music director Peter Martin provided some excellent moments of inspired improvisation. At times, his playing exhibited the explosive pianism that reflected both percussive soul and echoes of Cuban strike piano of the ''50s and'60s.

Reeves was seated on a high stool during parts of her performance. If this was prompted by any physical limitations, it wasn't obvious. Instead, it lended an air of relaxed intimacy that reduced the cavernous Rose theater to the scale of an intimate cabaret, thus heightening the emotional power of her delivery. 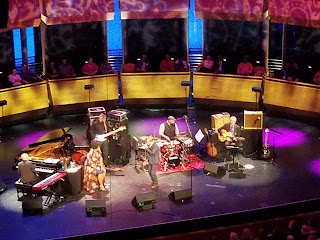 There were some outstanding moments of singular interpretation. 'That's All' featured some swinging jazz piano solos that had music director Martin almost levitating from his piano seat. All Blues became transcendent as not only a vehicle for Reeve's exceptional vocalese and scat, but morphed into an anguished protest shout that resonated throughout the house!

Dianne Reeves at times expanded the boundaries of her jazz interpretations to include the global sound of World Music and elements of protest. Without naming names, she repeated the phrase 'We who love justice will not rest!' and ended the concert with an emotional visual and vocal; participation exercise in which the audience flashed their cell phone flashlights, waving them in the air while chanting along with her vocalese. 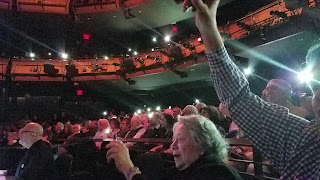 Nest door, at Dizzy's Club Coca Cola, Grammy-nominated vocal and piano jazz great Freddy Cole, mined the treasure of his famous brother Nat King Cole's legacy, his own original compositions and reflections on his days as a jazz and blues cabaret singer on the South Side of Chicago to create and engaging and captivating late-night set. Playing in what is perhaps the nation's most exquisitely appointed jazz room, with its view of the skyline surrounding Columbus Circle and Central Park, Cole created an intimate jazz experience with his warm, raspy voice and soulful interpretations. He is a master of phrasing and musical punctuation. A master of the ballad, Cole also surprised the audience by proving that he is also a master arbiter of the blues, In an extended portion of his late-night set, he referenced his many nights of playing in the storied clubs along 63rd and Cottage Grove on the South Side of Chicago, where Ahmad Jamal;. Carmen McRae, Miles Davis, Sonny Stitt, Gene Ammons, an many other achieved their fame. In honoring those legends and their apcraphal time, he took a musical stroll through the great jazz and blues songs of the '50 and '60s. It was an experience that literally brought tears to the eyes of this reviewer who grew up near and heard those legendary greats in what was called 'Sin Corner' during its heyday.  It was especially poignant when he brought up a shared experiencer of standing in front of the clubs on Sin Corner as a child, listening to the music of the legends inside, and then being chased off by the club owners. There were many bittersweet memories of those moments that truly resonanted.  At 85 years old, Freddy Cole is a living jazz and musical treasure. Any opportunity to hear him perform is both a pleasure and an honor. Wynton Marsalis and the Jazz at Lincoln Center Orchestra are performing Jazz of the '50s: Overflowing with Style in the Rose Theater  this weekend February 17-18 with a pre-concert discussion. For tickets and information, visit jazz.org,

Posted by Dwight the Connoisseur at 1:27 PM