LIBRARY HOTEL COLLECTION: THE PERFECT ROMANTIC GETAWAYS IN THE HEART OF MANHATTAN 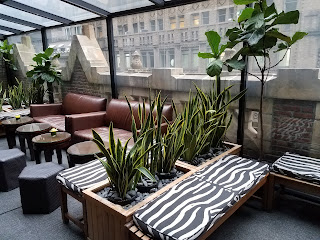 The elegant enclosed terrace of the Library Bar

.
NEW YORK--The perfect weekend getaway, offering both a serene atmosphere and easy access to Manhattan's many attractions are the hotels of the Library Hotel Collection located on New York's tony EaEast Side. Among the premium properties is the elegant Hotel Elysee, situated at 60 East 54th Street, bebetween Madison and Park Avenues. It was founded in 1926 as an exclusive European-styled hotel by Swiss-born Max Haering. After the hotel went into bankruptcy, it was purchased by then-hatcheck concessionaire mogul Mayer Quain, whose sons designed each room with eclectic flair and exotic names. No two rooms in the Elysee are alike and each room is given a name that reflects its distinctive personality. For example, the Sayonara suite was dedicated to Marlon Brando after his starring role in Tea House of the August Moon. Writer Tennessee Williams lived in the hotel for fifteen years and died there in the Sunset suite. The suites and rooms are all quite large and furnished with the finest in classically designed furnishings and appointments. The marble floored bathrooms are all equipped with high-end European fixtures. One of the outstanding features to the Elysee is the Club Room, exclusively available to hotel guests where a complimentary Continental breakfast is served each morning and a complimentary happy hour, with wine, sparkling wine, and assorted cheeses and other appetizers are offered every evening. The club is a perfect place to meet for convivial conversation before hitting the town for a Broadway show, which is just a stone's throw away, or an elegant meal; at one of the area's fine restaurants.

The Elysee is also known for the Monkey Bar, a piano bar just off the lobby. Opened in the 1940s, it became known to the cognoscenti as "the place to go where jokes die," especially off-color jokes and double-entendre songs. What started out as just another dimly-lit piano bar is best known for its wrap around murals of monkeys, designed by several famous artists over the years, with human likenesses and depicted performing various activities, such as riding elephants, hiding under Christmas trees or mixing Banana Daiquiris for other monkey-faced customers.

Another quiet getaway with an equally storied past is the Library Hotel conveniently located just a block or so from Grand Central station. Situated at the corner of 41st and Maison at 299 Madison, the hotel is also near the New York Public Library and Bryant Park. Designed by architect Stephen B. Jacobs, \r\n\r\n Each of the hotel's\u00a0 ten guest floors has a theme, designated after a major category of the Dewey Decimal Classification (the 5th floor, for example, is the 500s, the Sciences), with each room as a subcategory or genre, such as Mathematics (Room 500.001) or Botany (Room 500.004). (Dewey categories 000, 100, and 200 are placed on the 10th, 11th, and 12th floors, respectively.) Other room themes include Erotic Literature (Room 800.001), Poetry (Room 800.003), and Music (Room 700.005). All rooms have a small complement of books and decorations that accompany the theme, with 6000 books overall throughout the hotel. The rooms are compact, but very well appointed, with each of its amenities literally at your fingertips. Enjoy top of the line bed linen and bathroom fixtures.

The Library Bar is one of the focal points, not only of the hotel, but of the surrounding Advertising, PR, Fashion and Design community that surround the hotel. The bar with its distinctive decor and hushed atmosphere and enclosed and outdoor terrace spaces, all have surprisingly comprehensive views of the surrounding skyline. Its a regular meeting place for those solidifying creative deals or gathering for an intimate chat. The creative drinks list is among the most distinctive in the city and sure to merit a return visit. For more information, visit libraryhotelcollection.com. 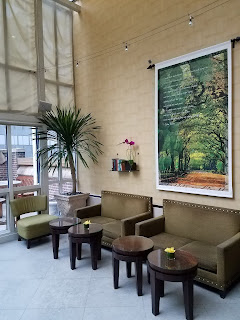 The Library Lounge and Terrace 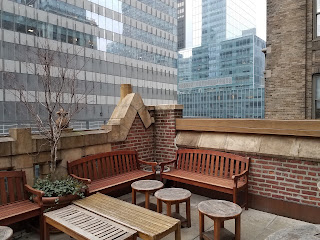 Next
Posted by Dwight the Connoisseur at 9:12 AM