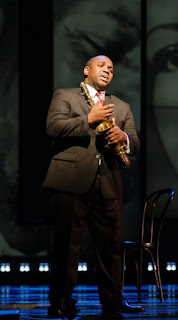 CHICAGO--When Charles "Charlie, Yardbird" Parker, Jr. died at a mere 34 years of age  on March 12, 1955 in the Fifth Avenue co-op apartment of Baroness Pannonica "Nica" de Koenigswarter of a drug overdose, complicated by heart failure, pulmonary pneumonia and cirrhosis of the liver, shock waves rippled through the international jazz community. "The Bird" had flown, leaving behind a musical legacy that would both confound and entrance musicians and music lovers for decades to come and change forever both the face and perception of the music known as modern jazz.

'Bird' as he was affectionately known, led a short, but complicated life. First, there was the heroin addiction, brought on in his tender teen years by an auto accident that left him dependent on pain-killing morphine that morphed into heroin addiction, a readily available opiate on the jazz scene . When heroin wasn't available, Bird turned to alcohol, which impaired his judgement and led to erratic behavior that included infidelity, abandonment of his only surviving child, drunken run-ins with the law and eventual incarceration in a mental health facility.

Strong meat for any biographical treatment and certainly unwieldy subject matter for a chamber opera of a scant 90 minutes long. But, Lyric Unlimited, the Broadway musical and modern opera arm of Lyric Opera Chicago, rose to the challenge and presented a searing. if at times, uneven,  local premiere of the chamber opera Charlie Parker's Yardbird by classical/jazz saxophonist and composer, the Swiss American Daniel Schnyder (Song For My Grandfather, Beep-Hop, Blues for Schubert) and poet-playwright Bridgette A. Wimberly (the award-winning poem Fire Walker and the play Saint Lucy's Eyes, a treatise on illegal abortion, poverty and forgiveness).  The work was presented off-site from Lyric's normal venue at the Civic Opera House, and was instead performed on the stage of the  Harris Theater in Millennium Park.

The Chicago Premiere featured much of the original cast, including opera superstar Lawrence Brownlee, singing a role tailor-made for him by the composer, the original Stage Director, Ron Daniels, Lyric Ryan Center alumnus Will Liverman as Dizzy  (John Birks) Gillespie, Parker's mentor and bandleader in New York's storied 52nd Street  and Harlem's Minton's Playhouse and Monroe's Uptown House. The mesmerizing Angela Brown as his self-sacrificing mother Addie, the luminous Rachel Sterrenberg as Parker's bohemian common-law wife, Chan,  Ryan Opera Center alumna Julie Miller as Parker's star-crossed patron Baroness Nica and Angela Mortellaro as his neglected first legal wife Doris (whom he never divorced) and subsequent liaison and abandoned partner Rebecca,  round out the stellar cast. There was a sublime moment near the end of the opera when Brownlee's Parker reached an epiphanal moment, invoking the words of the poet Paul Lawrence Dunbar ("I know why the caged bird sings...") before resurging into the hereafter. It is a powerful moment that grounds and otherwise fragmented story line.

There is much to like in this production of Yardbird in spite of its flaws. Exceptional stagecraft by set designer Riccardo Hernandez, and lighting designer Scott Zielinski, employ video panels and  lighting to evoke the layered, noir milieu of Harlem in the 1940s. Images of  the era's jazz legends appear on the video panels that spell out "Birdland," indelibly cementing the drama in its time period. Brownlee's rich, multi-textured bel canto voice soared through the composer's complex vocal runs into a falsetto range that would have dashed many a tenor to terra firma from the score's searingly high reaches. Brownlee navigated the treacherous path with ease, like an experienced pilot soaring to cruising altitude in the stratosphere. Composer Schnyder wisely avoided the trap of sounding cliched by incorporating too much of Parker's explosive musical complexity's,  instead incorporating bits and pieces of familiar riffs into a  tapestry of jazz, blues, gospel and scat. I  believe the correct modern musical term would be 'sampling,' now a common and recognized practice. At times, the recitative drug things along, as it does in many operas that employ this story-vamping technique, but the superb singing and spirited conducting by Kelly Kuo of the 16 piece orchestra ensemble in the pit quickly brought things to life. (A scheduling conflict due to the Lyric's regular performances at the Civic Opera House precluded the use of Lyric Opera Orchestra members in this production. But the pros on hand did a yeoman's job.)


Most audience members who came out for the pair of weekend performances at the Harris were probably already filled-in on at least the basics of Parker's brief, but multi-faceted life, filled and its simultaneous triumph and tragedy. The authors chose to give only a free-handed sketch of the artist's life, told from the standpoint of Parker, appearing onstage initially, as a rain-drenched apparition, then  shedding his raincoat to reveal a dashing period suit with his signature horn, singing and scatting with swagger to match. It's an epic performance that truly deserved more than its brief two-day run.

The work had its world premiere in 2015 at Opera Philadelphia and was subsequently premiered the following year in New York at the famed Apollo Theater in Harlem, and at Madison Opera, Wisconsin. The production will have its London Premiere in June at the celebrated English National Opera, for five performances June 9-17. If you missed the Chicago run, you might want to work this engagement of "Yardbird" into your summer vacation plans. 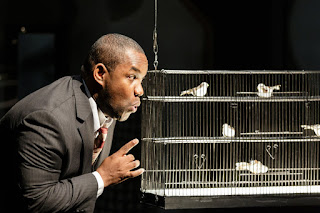 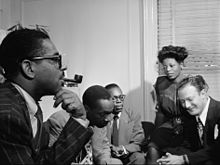 Diz with his crew backstage at Town Hall in 1947 with trumpeter Tadd Dameron, pianist Hank Jones and vocalist Mary Lou Williams with Milt Orent, who co-composed with Williams the jazz classic "In The Land of Oo-Bla-Bee" 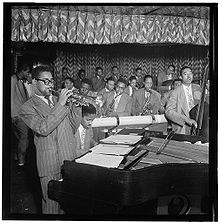 Dis with his band in 1947, with Miles Davis on trumpet, Charlie Parker and Cecil Payne on saxes. John Lewis on piano, Max Roach on drums and Ray Bryant on bass 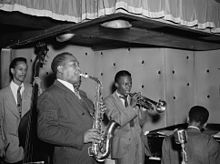 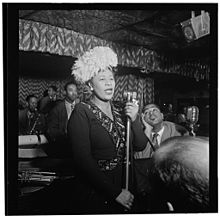 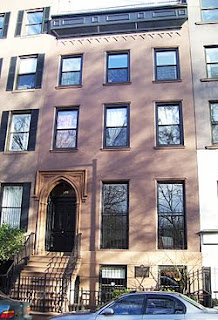 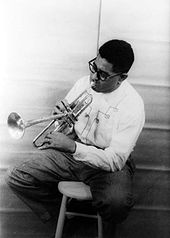 Dizzy warming up for a concert in Town Hall in 1955. He got the idea for his crooked horn when his original was damaged at a night club party for his wife Lorraine. He liked the sound from the bell bent at a 45 degree angle, so he had his subsequent trumpets made with the defect, which became his trademark 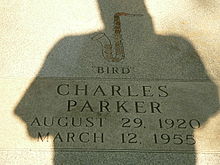 Posted by Dwight the Connoisseur at 2:32 PM