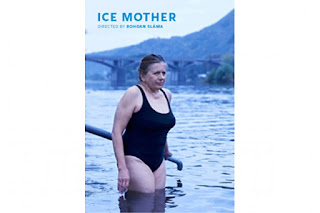 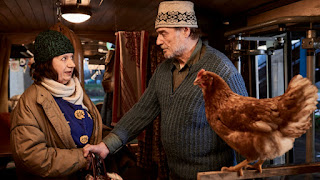 
NEW YORK--The dramatic film, ICE MOTHER, from director Bohdan Slama of the Czech Republic took the Best Screenplay Award at the 2017 Tribeca Film Festival.  From almost the moment the images of actress Tucana Kroncrova (Something Like Happiness)as Hana, a recently widowed 67 year old mother of two grown sons, dives into the icy river waters to save a drowning ice swimmer, Brona, played by veteran Czech actor Pavel Novy (Amadeus, Greedy Guts) and is suddenly thrust into a new romance and a new-found interest in life through ice swimming.
The film has less to do about ice swimming than it does about the complex and subtle interweaving of inter-generational family life and the challenges of trying to forge a slice of independence and happiness for a woman who has, throughout her adult life, seen after nothing but the welfare of others, including her greedy, self-serving sons. The single saving grace in the family is her eight year old  grandson, Ivanek, played with disarming charm by Daniel Vizek. The boy's deepening relationship with Brona becomes the glue that further cements their relationship amidst family storms and strifes.

This was the first film I saw after arriving in New York at the Tribeca Film office screening rooms for pre-festival screenings. After a turbulent flight from Chicago, it was just the kind of soothing cinematic tonic I needed. Also, there was something seductively captivating about the film. First, the beautiful and naturalistic cinematography and skillful directing of Bohdan Slama, allowed the story to unfold slowly, with careful attention to detail. The film is a real window into Eastern European culture. You can almost feel yourself seated at the inter-generational dinner table with Hana, her adult sons, their families and her new-found lover. It was a scene that, in fact, reminded me of the family dinners during my own upbringing in Chicago, that most Eastern European of American cities, with its large immigrant population.

This is a film that will touch every heart, even the most jaded. It treads lightly, but touches deeply. Hana's struggles, at 67 years old, to find new meaning in life, are palpable. Her disappointments at the ups and downs of her romance with Brona can be felt through Hana/Kroncrova's superb acting.

There's a great deal; of symbolism in t he film, but director Slama doesn't hit you over the head with it. He lets you arrive at it on your own. Hana's plunges into the river are a type of baptism of self discovery. It is also a rite of passage for her grandson into manhood, as Brona becomes his mentor, teaching him defensive moves in boxing with a won punching bag in the back of his trailer where he houses his pet chickens. One of them, is an odd character of sorts in the film. One of the chickens is his pet, which he carries everywhere, including to Hana's family dinner table. The chicken is not only a companion, but appears to have become a sort of surrogate wife. Fortunately, he is saved from that sad and solitary state of affairs by the arrival of Hana as a love interest.

This is a lovely film that even brought some of my fellow reviewers to tears. Its sentimental without being cloyingly so and it faces head on issues that many of us, well into are mature years are facing; those of feeling estranged and lonely, even when surrounded by family. There's also the search for meaning and purpose in a life that seems to be slipping away like grains of sand through your fingers.  Ice Mother is a terrific film that certainly deserves the Tribeca Film Festival Award for Best Screenplay.


Posted by Dwight the Connoisseur at 1:06 PM