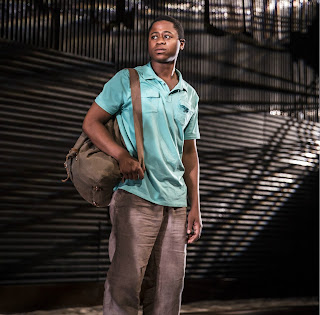 Daniel Kyri in his Goodman debut in the title role

If someone told you the harrowing story of African-born actor Shedrick Yarkpai, you would probably not believe it. Yet, here it is as the subject of a fully staged World Premiere production at Goodman Theatre, Chicago, Objects In The Mirror, by Chicago native playwright Charles Smith and directed by the Goodman's own esteemed Resident Director Chuck Smith (no relation).

Playwright Smith first encountered Yarkpai in 2009 while traveling to the idyllic city of Adelaide, Australia in 2009 for a production of his play A Free Man of Color (the play later premiered on Broadway with the Golden Globe, Tony, Emmy and Drama Desk Award-winning actor Jeffrey Wright in the lead). A young Liberian actor, Shedrick Yarkpai, was slated to play the title role. Over the time of their close working relationship, Yarkpai began to unravel the story of his more than decade-long journey from a refugee campin war-torn Liberia, through the unimaginable brutality, starvation and cruelty of the refugee camps in Guinea and Cote d'Ivoire to finally gaining asylum in Adelaide.

The story is a gripping one, and almost unbearable to listen to, were it not for the inherent innocence and honesty of the story-teller. Chicago actor Daniel Kyri, in his impassioned Goodman debut, plays young Yarkpai as he embarks on his perilous journey with his cousin Zaza Workolo (Detroit native Breon Arzell in his Goodman debut) and his uncle, John Workolo (Goodman veteran and  Allen Gilmore, The Matchmaker and three productions of A Christmas  Carol, in a searing performance.)  Yarpai leaves behind his doting mother, Luopu Workolo, played with steely conviction in a stand-ovation performance by Lily Mojekwu, in th e role she originated in the Goodman's New Stages Festival. New Stages Festival alum Ryan Kitley (Support Group for Men) returned to their Goodman to do a stellar job as Rob Mosher, a local attorney who befriends Shedrick and vows to help him dispel the demons of his past and unravel the legal entanglements surrounding the truth of his identity and family secrets

Seasoned director Chuck Smith assembled a Rolls Royce design team to bring his production to the Goodman stage. Set designer Riccardo Hernandez utilized an ingenous backdrop composed of overlapping sheets of corrugated tin, a material that is commonly used in a construction of the shanty in the settlements and refugee camps. to connote scene and demographic changes.. Make Tutaj created video projections that announced location changes, Birgit Rattenborg Wise created the evocative costumes. Ray Nardelli created th e sound scape, that was as much a part of the storyline, atmosphere and dialogue as anything else. Brian  J. Fahey was the production stage manager who orchestrated all of the complex elements to create a seamless production.

Objects In The Mirror is a must-see production now through June 4. Sadly, the events recounted in this play are happening to thousands of  refugees in Africa at this very moment. For tickets and show times, visit GoodmanTheatre.org. 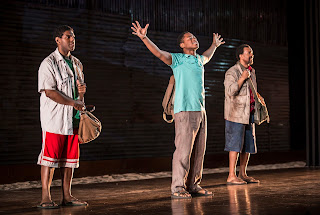 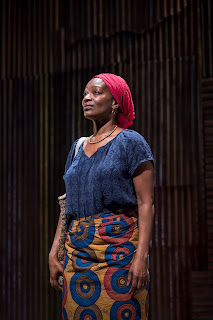 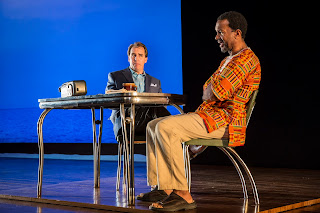 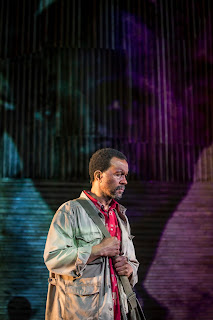 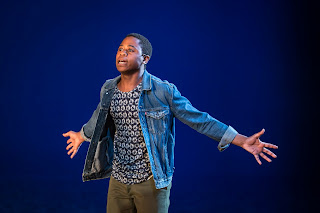 Daniel Kyri in a dramatic soliloquy 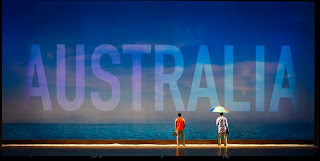 Sherdrick (Daniel Kyri) and John  Workolo(Allen Gilmore) marvel at their newfound refuge in Adelaide, Australia
Posted by Dwight the Connoisseur at 10:15 AM