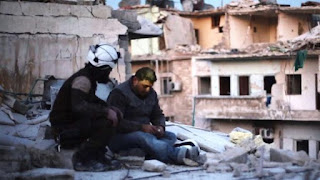 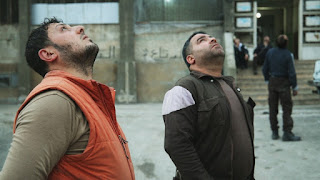 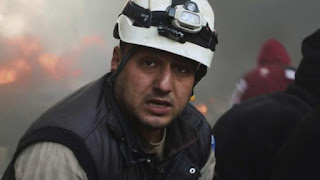 The Sundance Award-winning documentary Last Men In Aleppo is ripped straight out of today's headlines. It is a difficult film to watch, but hard to take your eyes off of. In the hands of Syrian director Feras Fayyad, director of cinematography Fedi Al Halabi and cinematographer Thaer Mohamad and co-director Steen Johannssen, it is a masterpiece. The images are horrifying; dead babies being pulled from the rubble of buildings, pummeled by both Russian  drones and the sarin gas of Syrian President Bashar al-Assad, as volunteers, called "White Helmets" struggle to rescue the living and keep an accounting of the dying. We see Khaled, Mahmoud and Sushi rushing toward the scene of devastation, moments after bombs have rained on the innocents. The men are mostly former construction workers, and their skills at building are useful as they use heavy duty equipment to gingerly manipulate crushing masses of concrete to rescue victims moments from death.

In the opening scenes, the limp bodies of two infants are pulled from the rubble as we here a young boy crying, trapped in the rubble of his bombed out apartment building. "Don't cry," Khalid gently reassures him. "We are here to get you out."  The crew later visits the surviving family members, still wearing the bloody bandages of their fresh wounds. They learn that the father's two young sons and his wife were killed. The saddest news of all is that one of the young children that had been rescued, later died in the hospital. The oldest boy, the one who was trapped,  begging him to stay and clinging to his protective arms, as if the man's presence would ensure his future safety. "Stay! Stay! The coffee's ready!" The young boy cries as the men rush off to the next disaster. Speaking in confidence outside, we learn that Khalid made the visit, not so much to reassure the living, but to get an accurate accounting of the dead. His is a grim, sysyphean task in which no one is expected to survive.

"We will all die here. That is our fate," Khaled says at more than one juncture in the film.
Surprisingly, life goes on in the brief respites between bombings. Open  air markets spring into existence with fresh produce and live chickens appearing as if out of thin air. Khalid and his crew can been seen getting haircuts and shaves at the local barber, the reassuring hum of clippers and gossip filling the air. Khalid teasing the younger Mahmoud that he must be trying to impress a neighborhood girl. An sidewalk aquarium shop attracts Khaled attention. He decides it buy some goldfish. "You can eat them when there's no foot after the bombings," one of the crews teases. Its all gallows humor. Khaled swears that he's strictly buying them as pets, not for food. To prove the point, he sets the crew about the task of using their construction skills to build an elaborate concrete pond in from of his apartment, complete with a cascading fountain. Khaled draws the analogy that he is like the fish in the pond, unable to live out of water for more than a few minutes, just as he is incapable of living outside Aleppo. "I will die here," he says with prescience and resignation.

One particularly poignant scene occurs during one of the many ceasefires. Khaled, his crew and their families load up the ambulances and rescue vehicles and tear through the city as if going to an attack site. Their destination? The local playground in the center of town. Khaled confesses that, because of the constant turmoil and threat of war, he had never played as a child. We see his hulking frame testing the sturdiness of the play equipment as he careens down a kiddie-sized slide. "I hope I don't break this thing!" he shouts giddily. The respite is brief as spotters see drones flying overhead. A voice bellows over a loudspeaker. Everyone run to safety! The play hour is over. Its back to shelter, and for Khalid and his crew, the white helmets and the ambulances.


The film's pace is measured, almost elegiac. The shots of bombs falling on Aleppo are virtually poetic with the bursts of light falling in a latticework of light against the beautiful backdrop of the original music by Karsten Fundal.  As horrific as the subject matter is, Last Men In Aleppo is a film that inspires hope. Its showing in theaters and on Netflix should inspire governments, organizations and individuals to mobilize every humanitarian and diplomatic means at their disposal to end the carnage in Aleppo.


Posted by Dwight the Connoisseur at 2:28 PM