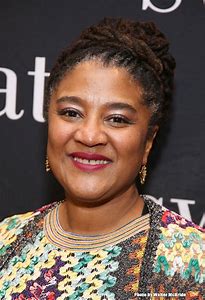 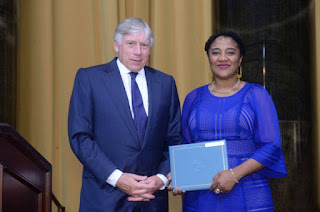 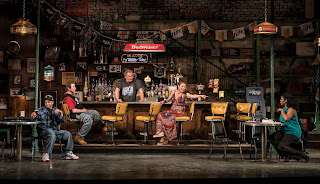 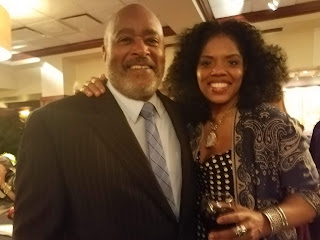 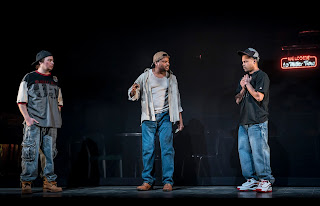 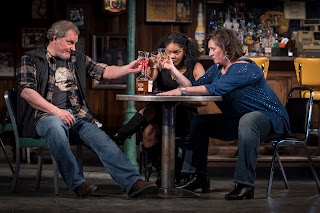 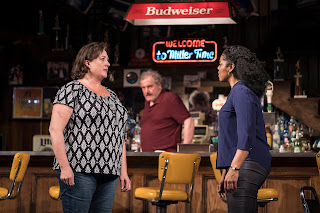 Lynn Nottage's 2017 Pulitzer Prize-winning play Sweat  runs now through April 14 on the Albert stage of the Goodman Theatre in downtown Chicago. Directed by Ron OJ Parson, the play is a must-see dissection of the race and class drama that is currently being played out in the blue-collar "Red" states among the MAGA-hat wearing workers who voted the current administration in the White House. Ironically, the play opened on the night before President Trump visited Ohio, trying to play catch up in a state in the throes of quickly joining the list of places where local factories and industries are shutting down and fleeing to foreign climes where start up costs and labor are cheaper.

The story behind Sweat takes place in the Rust Belt town of Reading, PA between the years 2000 and 2008,  between the economic foothold of NAFTA and the great recession. Nottage developed the play after filtering the perspectives she gained through scores of interviews with residents and former factory workers. The artist is further developing her research as a performance piece to be performed in downtown Reading.

Welcome to the no-named linoleum floored bar located near the mythical Olstead's steel tubing plant (based on Reading's real-life Hoffman Industries), with its mix-matched bar stools and equally odd assemblage of  misfits, whose fates are intertwined by the impending dislocation of their jobs at the downsizing plant.

The bar is presided over by the morose Stan (Goodman veteran Keith Kupferer, Jeff Nominated Support Group for Men, God of Carnage and Passion Play), a former worker at the plant rendered disabled by a freak accident. He now takes out his bitterness on the odd collection of disgruntled plant workers who are his frequent (and apparently, only) customers. The bar acts as both  refuge and  support group where its inhabitants air grievances,  bemoan personal regrets, and  exact revenge  on transgressors past and present. Their common enemy is the plant, and when that isn't the topic of derision, they feed upon each other.

At the center of this landlocked ship of fools are three women; Cynthia (a powerhouse Tyla Abercrumbie, last seen in Goodman's Magnolia), an upwardly mobile line worker with aspirations of becoming a supervisor, Tracy (Kirsten Fitzgerald, in her Goodman debut), a brash, big-boned and equally loud-mouthed veteran who isn't afraid to push her weight around, and Jessie (Chaon Cross, also in her Goodman debut), who drowns her sorrows and self-esteem in booze, yet remains loyal to her friends and the trade union, which disappoints them all.

The men, Oscar (Goodman's Pedro Paramo) is of Columbian-descent and works as janitor to the bar.  Often misidentified as Puerto Rican, and assumed an immigrant, he he was born and raised in Reading. Lack of a union card, no doubt the result of discrimination, is keeping him from his fondest dream of working in the plant.  When a union walkout provides him the opportunity to work at least part-time, he is denounced by his friends at the bar and branded a scab. The resulting verbal and physical abuse eventually drives the drama to its inevitable and violent conclusion.

Jason (Mike Cherry, Goodman's Fish Men), is a sullen, violence-prone deadhead,  who would very probably be a skinhead or neo-Nazi in today's world. Then there's Chris (Edgar Miguel Sanchez (Goodman's stop,reset), a young hothead and Brucie (Andre Teamer, Goodman understudy in Objects in the Mirror and Sign in Sidney Brusteiin's Wndow). Finally, there's Evan (Goodman veteran Ronald L. Connor, Father Comes Home From The Wars and A View From The Bridge),  Cynthia's estranged husband who attempts to drop back into her life, but still speaks at her through the fog of  drug addiction and implied domestic violence.

Sweat is headed by a standout team. Lynn Nottage is the first woman in history to win two Pulitzer Prizes for Drama. Chicago audiences will recognize director OJ Parsons, a veteran of Chicago's Steppenwolf, Black Ensemble and ETA theatre companies as both actor and director. He also directed Goodman's Let Me Live. His staging for Sweat is in its Goodman debut.

Sweat has been compared to Steinbeck's Grapes of Wrath and Arthur Miller's Death of a Salesman. The New Yorker described it as "the first theatrical landmark of the Trump Era." The Goodman production is solid all the way around and impactful. It addresses the personal, unseen struggles of most working class Americans that play out in the shadows behind the glare of today's headlines. These are the souls that fall between the cracks into the abyss each time there's a shift in the economy. Society has yet to weave a proper safety net for their rescue. At least in Nottage's Sweat, there is someone who listens and cares to tell their story. 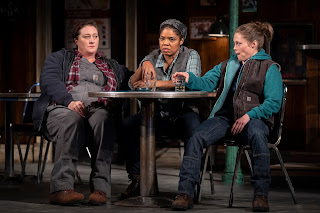 Tracey, Cynthia and Jessie in a rare moment of sisterly bonding 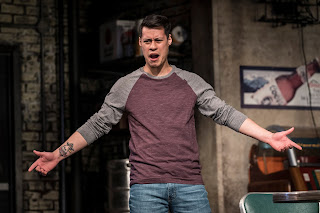 Oscar (Steve Casillas) bemoaning his fate as a scab


Posted by Dwight the Connoisseur at 1:59 PM