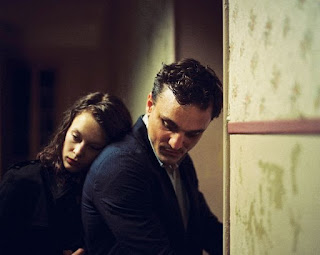 "Those who cannot remember the past are condemned to repeat it." The words are those of  George Santayana  (b. Madrid d. Rome1952), a Spanish American essayist and philosopher who was educated at both Harvard and Cambridge and was a philosophy professor at Harvard before retiring to Italy, where he died.  The words are particularly applicable in the time-shifting suspense drama TRANSIT, written and directed by German filmmaker Christian Petzold. Beautifully filmed by cinematographer  Hans Fromm (Phoenix 2014, Barbara 2012, Dreileben-Beats Being Dead2011, Jerichow2008), with an appropriately haunting film score by Fromm's frequent collaborator and long-time German and American TV film and TV series cinematographer Stefan Will.

TRANSIT is the Casablanca of our time. A film that already has the earmarks of a cinematic classic, it folds back time in Einstein Emc2 fashion to portray a Kafka-esque world where a mysterious neo-Nazis Facist force occupies France, resulting in a tapestry of interweaving stories of exile, abandonment and escape. German refugee Georg (the superb German actor and dancer Franz Rogowski (Shooting Star German Film Award-Best Leading Actor), suddenly finds himself bereft and alone in Marseille, having assumed the identity of a famous German author, a recent victim of suicide, who has also inadvertently obtained his all important identification papers and vital letters of transit on the next available ship out to Mexico. A healthy cache of money and freedom awaits but, as Georg awaits transit, fate, and his heart tug him in an altogether different direction.

The tale is full of perils and pitfalls. Along the way, Georg befriends a charming, capricious young Arab boy, Driss ( played with disarming charm by Lilien Batman), and his breathtakingly beautiful mother Melissa (Maryam Zaree), who is also (lets pull the heartstrings as hard as possible), deaf.  Georg sits crying in his beer at the cafe run by a world-weary barkeep , played by veteran German actor Matthias Brandt, who acts as narrator of this depressing tome. Brandt also plays the dual role of Erzahler, a delirious German writer who is doomed to expire at the very moment that he is granted his precious emigration papers. Georg is also haunted by the apparition of a mysterious, beautiful woman, Marie (award-winning German actress Paula Beer-Frantz2016, Bad Banks2018, The Dark Valley2014).

The film unfolds in a dark, suspenseful manner reminiscent of Alfred Hitchcock. The director masterfully maintains the film's sense of impending doom. The Sword of Damacles is poised to fall at a moment's notice, threatenng Georg's pursues of freedom. He is torn by the twin demons of of his desire to escape and his longing for personal healing.

TRANSIT is loosely based on the 1944 novel of the same name by author Anna Seghers, whose own husband was held as a Nazi war prisoner while she lived in Marseille,  among a group of similarly trapped exiles, desperately trying to get out before the Nazis caught up with them. Her story, and its portrayal in her novel TRANSIT was so compelling and multi-faceted that filmmaker Petzold said that virtually all of his films were in one way or another based on  Segher's exIstential political thriller.

TRANSIT  is a masterpiece of a film that lingers in the heart long after the credits have rolled. You must see it.

A German/French productions in German and French with English subtitles
101 mins
From Neon Productions and Arte France Cinema
Now playing:
Music Box Theatre
3733 N. Southport Ave.
Chicago, Il. 60613
In Wrigleyville
musicboxtheatre.com
Reviewers note: An elegant, charming, remembrance of the great movie palaces of the 1920s, with a lovely lounge and garden, great drinks and REAL BUTTER ON THE POPCORN!

Posted by Dwight the Connoisseur at 2:32 PM