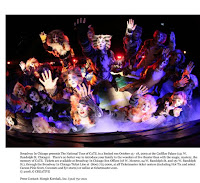 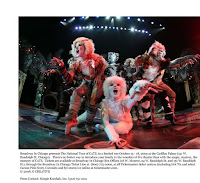 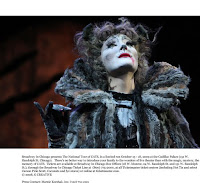 CATS, the longest continuously touring show in American theatre, slunk into Chicago’s Cadillac Palace Theatre for an October 13-18 run. The perennial Andrew Lloyd Weber favorite, the latest offering from Broadway in Chicago, proved that this venerable production not only has nine lives, but many more to spare.

Its been a decade since this reviewer last saw the likes of Bombalurina, Grizzabella and Rum Rum Tugger. It didn’t take long to recall why this show revolutionized musical theatre by vividly bringing to life the poetic conceits of T.S. Eliot and creating characters whose feline personas resonated with audiences beyond the stage.

The audience and the entire theatre become part of the act as the garish strobe lights and the pulsating rhythms of Musical Director J. Michael Duff and Associate Musical Director; Keyboard Christian Regul made the cavernous Cadillac Palace Theatre come alive. Cast members in their bright, imaginative costumes moved lithely through the audience and leapt onto the stage in Choreography by Associate Director Gillian Lynne. The set by Designer John Napier is whimsical and full of surprises, such as the corrugated tin engine and ramshackle ‘wheels’ in Act Two when Skimbleshanks, the Railway Cat (John Jacob Lee), introduces himself. Lee recalled the boundless energy of a young Danny Kaye during the heyday of the Hollywood musical.

Grizabella, the Glamour Cat (Anastasia Lange), brought the show to a spine-tingling halt with her emotional rendering of Memory, the musical heartbeat of CATS. Old Deuteronomy (Philip Peterson) elevated the grizzled character to operatic proportions with his heartfelt singing.

The production, Directed by Trevor Nunn, was first-rate throughout. Lighting Designer David Hersey, a veteran of over 250 plays, operas and ballets, showed why he is a multiple Tony winner (Evita, CATS and Les Miserables).

The dancing is stupendous and is probably the best extended display of the genre on any musical stage. There are times, such as the moment when Grizabella stands center stage en pointe in the white glare of the key light. It is an equipoise that rivals anything seen at the Royal Ballet or Sadler’s Wells.

There are enough props in CATS to fill all of the vacant lots in Bronzeville, but the overall effect is a warm and fuzzy, family-friendly show full of heart-tugging emotion, terrific dancing and lingering moments that linger in ‘memory.’

Broadway In Chicago continues with The New Mel Brooks Musical: Young Frankenstein, November 4 at the Cadillac Palace. For tickets and information, visit www.broadwayinchicago.com.

Posted by Dwight the Connoisseur at 9:17 AM