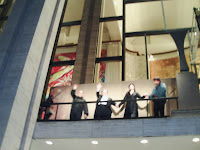 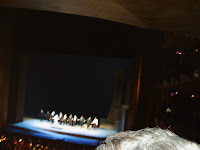 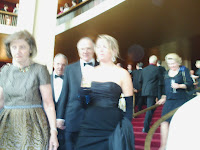 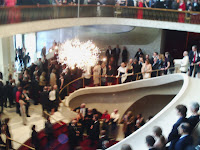 Tosca, Giacomo Puccini’s timeless tale of the star-crossed lovers, the courtesan and chanteuse Tosca and the firebrand revolutionary and patriot Cavaradossi, opened the Metropolitan Opera’s 2009-2010 season with dramatic flair.

The new production, with sets designed by Richard Peduzzi in his Met debut, costumes by Milena Canonero, lighting by Max Keller and directed by famed director Luc Bondy, was alternately cheered and booed by the capacity audience. The stripped-down, post modern look of the production rankled the ire of tradionalists in the audience. However, the production, lacking any superficial pretense, allowed the underlying tension of the storyline to shine through.

Met Music Director James Levine conducted the Metropolitan Opera orchestra with an almost eerie sense of urgency. It was as if the composer were at his elbow whispering cues to alternately turn up the dramatic heat or to pull back to allow the ether of his achingly romantic melodies to rise to the surface.

Soprano Karita Mattila, in the title role for the first time outside her native Finland, sang with dramatic conviction that, superficially, might have seemed over the top, but served the character well. Tenor Marcelo Alvarez, the Argentine superstar whose sylvan voice regularly graces the stages of Covent Garden, Deutsche Opera, Berlin and in Paris, Madrid and Zurich, sang the role of Cavaradossi with dramatic brilliance. His sparkling, clear tonality and soul-stirring urgency reminded one of a youthful Pavarotti. In particular, his opening Aria “Recondita armonia’, in which he compares the dark-haired beauty of his beloved Floria Tosca to the blond-haired subject of his painting, Marchesa Attavani, was delivered with such chilling conviction that it brought a tear to the eye.

In spite of these landmark performances, the evening clearly belonged to Georgian baritone George Gagnidze as the evil, self-possessed Scarpia. A vainglorious loyalist who will do anything to assert his ruthless preeminence, Gagnidze sang the role with uncompromising relish. He allowed the character’s ruthless nature to come through without over-selling the point. When he finally meets his end at the hands of the impassioned yet cunning Tosca, we are almost saddened to see him go.

The story of Tosca, based on a play by Victorien Sardou and realized in the Libretto by Giuseppe Giacosa and Luigi Illica, takes place in the Napoleonic era of Rome in 1800. The city is in the throes of revolution with Bonaparte’s revolutionary forces eating away at the underpinnings of the corrupt titled aristocracy. The characters of Tosca, Cavaradossi and Scarpia give vivid reality to the political dichotomy of the era. Scarpia and Cavaradossi are the polar opposites that act as the pillars of society’s two sides. Tosca is somewhere in between, a benign force that reaps the benefits of the corrupt system’s largesse in her role as a singer, but secretly harboring the flame of the revolutionary spirit in her bosom, through her love for the painter, Cavaradossi. Fate and circumstance force her to eventually choose sides.

With this debut production, Metropolitan Opera firmly planted its roots in the digital age. The performance was transmitted liver on large screens outside in Lincoln Center’s Josie Robertson Plaza and in Times Square for free. It was also streamed live on the Internet and the Met’s website and on Metropolitan Opera Radio on Sirius XM on a subscription basis. A matinee performance will also be transmitted on movie theatre screens around the globe live in HD on
October 10. For more information, visit www.metopera.org.

Posted by Dwight the Connoisseur at 4:19 AM