The Met: Live in HD Aida an epic from any angle 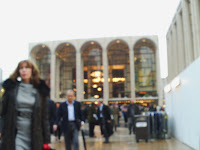 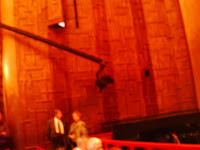 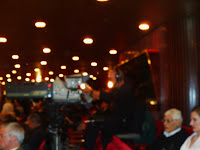 Metropolitan Opera’s Live In HD production of Giuseppe Verdi’s Aida was a cinematic triumph. The revival production at Lincoln Center was the Met’s largest, incorporating hundreds of extras, called “supers”, a Bolshoi-inspired ballet troupe, live animals, the full Metropolitan Opera Chorus under Donald Palumbo and an international all-star cast. The Live HD production was directed by the distinguished Gary Halvorson, a Met Live HD veteran and director of TVs “Two and a Half Men” and “Friends.”

“David has been with us since Day One,” a Met spokesman told The Times Weekly. “He’s done a superlative job.”

Entertainment & More covered the spectacle from several key vantage points- backstage at the Metropolitan Opera House, Lincoln Center, New York, inside the house during performance and from a Live HD transmission at Cinemark Seven Bridges in Woodridge, Illinois.

Suspense leading up to the live transmission was palpable backstage at Lincoln Center. An army of technical and support staff arrived in a steady stream of as Hostess and Met superstar Renee Fleming paced through her opening monologue. Director Halvorson and his crew sat in the control booth scrutinizing the monitors and the production’s ten camera positions. They went through a checklist of orchestrated camera moves that read like an operatic libretto in its complexity and size.

Production by Sonja Frisell, set design by Gianni Quaranta, costumes by Dada Saligeri and lighting designed by Gil Wechsler, approximated the Pyramids and Temples of Ancient Egypt. Backstage, the sets were lowered into place by giant pulleys attached to pipes that extended from the fly space several stories above. Technical Director John Sellars gave the Live HD audience a backstage tour of the massive operation. He pointed out the overhead cameras that gave the audience a birds-eye view of the action onstage.

During the scene changes, huge trucks and teams of carpenters and stagehands, pulled prepared sets into place that each weighed several tons. In the wings, anxious performers awaited their cue. Their trainers calmed skittish teams of specially trained horses. The opera was about to begin; the countdown measured by pounding pulses and quickening heartbeats.

Conductor Daniele Gatti gave Verdi’s score the appropriate sense of urgency represented by the steamrolling plotline. Mysteriously, there were a few audience members who booed him during a previous staging of Aida, which was used as a ‘dress rehearsal’ for the camera crew. Perhaps they didn’t understand the importance of dramatic pacing!

Verdi’s score is sweeping and grandiose in nature. In many ways, it sounds like the voluptuous film scores that audiences have become accustomed to. How appropriate that Aida has now been brought to the Big Screen.

Onstage, sopranos Violeta Urmana as Aida and Dolora Zajick as Amneris, gave object lessons in the supreme art of dramatic opera singing. In addition to their voices ringing to decibel that made the Swarovksi crystal of the Met’s chandeliers vibrate inside the hall, there was a distinct reverberation in the surround sound theatres that made audiences gasp. Tenor Johan Botha was a thundering presence as the Egyptian General, Radames, projecting both a vulnerability and strength of character that made his later conflict over duty to his country and his love of Aida ring with integrity.

Chorus Master Donald Palumbo and the Metropolitan Opera Chorus gave one of the most comprehensive and stirring performances in any of the Live HD movie casts.

Director Gary Halvorson is a classically trained pianist (Julliard) who has also garnered acclaim as a distinguished television director, with credits that include the hit TV shows Two and a Half Men, Friends, The Drew Carey Show and Everybody Loves Raymond. He began his career by directing a music show for Leonard Bernstein when he was just 20 years old. Halvorson has directed a majority of the Met Live in HD transmissions.

The Emmy and Peabody Award-winning The Met: Live in HD series is now in its fourth season.

Halvorson employs ten cameras in the Live HD transmissions. Cameras on pedestals are placed on the far left and far right aisles of the main floor, about ten rows back. In the corner front boxes overhead, robotic cameras are suspended over either side of the stage. Another camera on a pedestal is in the orchestra pit and yet another sits dead center at the rear of the auditorium. Stationary cameras, which are also used during regular performances to transmit the performance to a downstairs theatre for latecomers who miss their seating, are also occasionally employed. There are additional cameras backstage. A robotic camera on a dollie moves across the lip of the stage like a sentinel patrolling the parapets in the company’s season-opening opera Tosca.

“We’re breaking new ground,” Halvorson said in an earlier interview. “We are the first to put remote control dollies on the lip of the stage, which makes the movie audience feel like they’re inside the action. I first saw remote dollies in a race in the Olympics. I saw a camera that was running as fast as the runner, and then it cut to the camera’s point of view while keeping speed. That’s how I had the idea to use sports equipment for live performance.

The Times Weekly spoke with several members of the audience who attended the move theatre transmission at Cinemark Seven Bridges in Woodridge, Illinois. There were people who brought their entire families, especially their children, to see their first live opera ever. One teacher from a local middle school brought members of her class to view the spectacle. “The students are learning about ancient Egypt in their classroom setting, so I’m using this as a teaching opportunity,” the teacher told our reporter.

Budget cutbacks at Chicago’s Lyric Opera and reductions in the budgets of local school boards have also made trips to downtown Chicago for special Lyric matinees for students have been severely limited, she went on to say. “So this was the next best thing. They’re still getting a live performance of a great opera and a great learning experience.”

Looking at the production live onstage at the Metropolitan Opera House, the singers and their superior acting ability reduced the grandiose scope of the production to an intimate soundstage. On screen in the live in HD transmissions, the superior camerawork of Director Halvorson and his team made the production seem more like a well-edited Hollywood film than a live ‘on-the-fly” affair. One scene in particular stands out. When Radames’ rendezvous with Aida on the banks of the Nile and inadvertently betrays his country while professing his love for her, there are moments of cinematic ecstasy. The camera’s close-ups of Aida/Urmana portray her internal anguish, which Radames/Botha is seen pacing in the background, conflicted by his love for Aida and his duty to his nation. It is a sublime moment that embodies everything that the Live In HD experience is all about.

There was only one small glitch during a camera switch during a crucial scene in the second act, in which a camera position came up blank on screen. A Met spokesman assured The Time Weekly that the mishap would be corrected in editing before the Encore presentation, worldwide, Wednesday, November 11 at 6:30pm. For tickets and information, visit www.metopera.org or www.fathomevents.com.

Posted by Dwight the Connoisseur at 12:53 AM