A 'Bell' that rings to the Heavens; a Saint-Saens that sings with the strains of memory 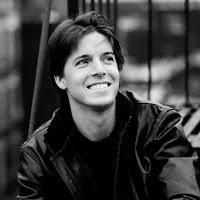 Violin virtuoso Joshua Bell brought his rock star image and Dancing with the Stars moves to the Armour stage in searing performances of French composer Camille Saint-Saens Introduction and Rondo capriccioso and Max Bruch’s Violin Concerto No. 1 in G minor. The multiple Grammy winner and exclusive Sony recording artist played the Vieuxtemps Guarneri del Gesu violin of 1741, marking the first time this priceless gem, valued by some at more than $10 million, was played in the United States. The violin was a favorite of 19th century Belgian violin legend Henry Vieuxtemps (for which it is named) and 20th century legend Yehudi Menuhin, whose recordings of the Bruch remain musical landmarks. Bell has some connection with the intrument, his violin teacher was trained by a disciple of Vieuxtemps.

The orchestra was guest-conducted by Sao Paulo, Brazil principal conductor Yan Pascal Tortelier, replacing an ailing Roberto Abbado, nephew of the legendary Claudio Abbado. The Parisian-born Tortelier substituted the work of fellow Frenchman Gabriel Faure and his all too familiar Pelleas et Melisande Suite for the planned Horace victorieux of another Frenchman, Arthur Honegger. Maestro Tortelier managed to make this time-worn staple of every coffee house on either side of the Atlantic sound fresh and alive, especially with the inspired solo flute playing of Assistant Principal Richard Graef.

Bell arrived on stage hefting the priceless Guarneri to thunderous applause. He looked like a racehorse, ready to crash the starting gate in his thin-legged Armani Nehru-inspired tux. His fingers darted lithely across the fingerboard, caressing each string so as to cause the notes to sing with stunning clarity. Each phrase melded into the next in a seamless arc of melody. It was especially so in the Bruch, when the hauntingly delicate Romanticism of the second-movement, Adagio, suddenly cascaded into the heroic theme that introduced itself like a Heldentenor in a Wagnerian opera.

The finale, Allegro energio, was just that. Bell unleashed all of his youthful stamina on this virtuoso statement that is the signature of every great violinist on the concert stage. I heard Yehudi Menuhin play it in concert with the San Francisco Symphony and he rocked the house. Bell managed to send Bruch’s singing melodies into the outer hemisphere, where NASA rockets had been poised to bombard the moon’s craters. I’m sure that by some miracle of science, a Bell-sent F-note is reverberating somewhere on the moon’s surface.

Saint-Saëns ‘Organ’Symphony (No. 3 in C Minor, Opus 78), is almost a misnomer, since for most of its nearly 40 minutes, we hear almost everything but. When its namesake instrument finally introduces itself, with thundering authority, in the masterful playing of guest organist Dr. Henry McDowell, the composer’s intent is abundantly clear. Everything preceding it was constructed as a lead-in to its triumphant entrance; the peacefully contemplative musings of the strings and the tempestuous scherzos and mach four speed of the piano arpeggios, played with laser-like clarity by Principal Piano Mary Sauer.

I was overcome by the sheer majesty of the moment. Tears streamed down my face as I was awash in a flood of memory and emotion. I thought of my good friend, the late George Hale, a San Francisco Symphony Board member who, a decade ago, made a mighty donation to the orchestras pension fund for the opportunity to play the newly installed pipe organ in the same symphony at the organ’s inaugural concert in the then, newly-christened Davies Hall. George was an ardent champion for the inclusion of Black artists and composers on the concert stage. I also thought of President Barack Obama’s winning of the Nobel Peace Prize the previous morning, putting him firmly in the footsteps of one of his spiritual mentors, Dr. Martin Luther King, Jr. I also thought of how Dr. King might have felt, were he sitting in the audience that night, watching the skillful performance of the African American virtuoso and scholar, Dr. Henry McDowell. It was an epiphany. Such is the power of great music and a great performance!

On October 15, Music Director Designate, Maestro Ricardo Muti, returns to Symphony Center in an exciting program of Mozart and Bruckner. The following night, October 16, the CSO strings lend themselves to the vocal styling of Jazz Diva Dianne Reeves in the inaugural concert of the Jazz at Symphony Center Series. For tickets and information, visit www.cso.org.

Posted by Dwight the Connoisseur at 9:36 AM