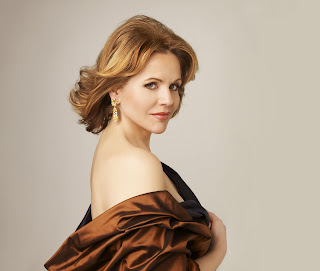 Soprano Renee Fleming has become the ‘go-to-girl’ for major music gala openings. Last year, the two-time Grammy winner opened the Metropolitan Opera’s 125th Anniversary Gala with fully staged versions of her signature roles, Verdi’s La Traviata, Massenet’s Manon and Richard Strauss’ Capriccio, the first woman in the Met’s 125 year history to headline an opening night gala. A few weeks ago, she opened the New York Philharmonic’s 2009-10 season under the baton of its new Music Director Alan Gilbert with Messiaen’s Poems Pour Mi. This past week, she was the featured soloist for the 2009 Gala Opening Night of the Chicago Symphony Orchestra with Four Songs by Richard Strauss under the baton of another Grammy-winner, Conductor Paavo Jarvi.

It was a stellar performance. Wearing a gown with enough fabric to drape one of the Art Institute lions across the street from Symphony Center, the diminutive singer launched a performance with a voice that filled every nook and cranny of the cavernous space. Listening to the encores in the corridors, her voice could be heard soaring above the orchestra. Even the ushers and bartenders stood at rapt attention, peering through the porthole windows of the aisle doors to catch a glimpse of her compelling presence; such is Fleming’s mesmerizing appeal.

The evening began with a series of orchestral selections, including Leonard Bernstein’s Divertimento for Orchestra, Samuel Barber’s Knoxville: Summer of 1915, with Fleming artfully singing the prose of Poet James Agee, and a rollicking rendition of Strauss’ ever-popular Till Eulenspiegel’s Merry Pranks.

The orchestra sparkled with dramatic flourishes from the percussion and the resonating sounds of the CSO’s signature horn section. But the evening clearly belonged to La Fleming.

Richard Strauss composed numerous orchestral songs for the love of his life, his wife, soprano Pauline de Ahna. In fact, the two performed often together before the world’s leading orchestras with Strauss conducting. They came to Chicago in 1904, where Pauline sang seven of her husband’s songs with Richard at the helm. Fleming’s performance was homage to what must have been a memorable evening. She fully captured the nuance and romance of Strauss’ songs. Enraptured by the moment, she swayed and nearly swooned while singing the words of German poet Otto Julius Bierbaum and his ‘Harmonious Vision’ that Strauss had set to music. “I walk with one who loves me into peace, filled with beauty,” she sang with conviction.

There were spine-chilling moments, such as when Fleming reached a climactic high A in Hermann von Gilm’s ‘Zueignung‘ (Dedication) and when she delivered the hushed benediction of Karl Henckell’s ‘Winterweihe’ (Winter Dedication). The words of John Henry Mackay’s ‘Verfuhrung (Seduction) were just that in Fleming’s deft vocal interpretation.

The audience did not want to let her go and Fleming obliged with a series of encores, ending with a light-hearted selection from Bernstein’s West Side Story, “I Feel Pretty.” As well she should!

Posted by Dwight the Connoisseur at 9:00 PM