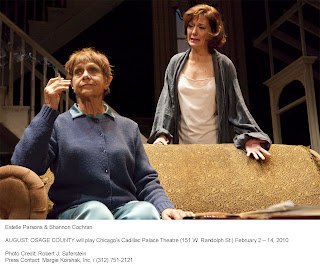 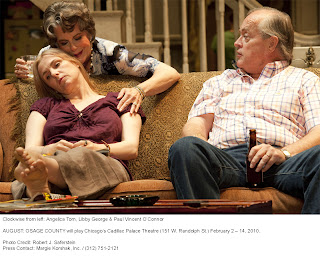 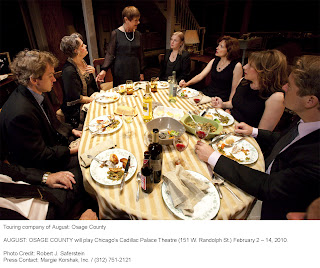 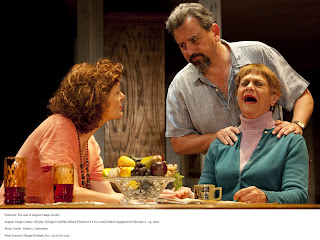 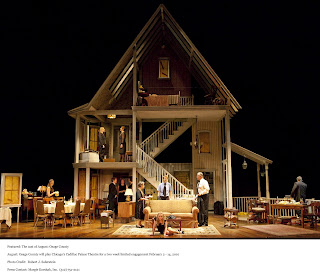 “Here we go ‘round the prickly pear!” That declaration as family patriarch Beverly Weston raises his glass of Jim Beam whisky on high should be an indication of what’s to come in Broadway In Chicago’s homecoming production of Tracy Lett’s Tony Award and Pulitzer Prize-winning play August: Osage County in a two-week engagement at the Cadillac Palace Theatre through February 14.

Originally premiered and produced at Chicago’s Steppenwolf Theatre Company in 2007, the play went on to open at the Imperial Theatre on Broadway in December of the same year to wide critical acclaim, earning seven Tony nominations and winning five. The play also achieved a record-setting 640 performances on the Great White Way in June 2009.

There is much bloodletting and truth telling in Lett’s world of the Weston family home in rural Oklahoma, imagined brilliantly in a dollhouse cut-away of a set by Scenic Designer Todd Rosenthal. Lighting (Ann G. Wrightson) and Sound (Richard Woodbury, with a little help from Eric Clapton) all successfully evoke the claustrophobia of a stifling, hot summer in Oklahoma. Fight choreographer Chuck Coyl brings the audience into the vortex of the family’s frequent and explosive confrontations.

The play stars Academy Award-winner Estelle Parsons (Best Supporting Actress, Bonnie and Clyde, 1967) in the role of Violet Weston, the family matriarch from Hell. (Here’s a trivia question: Who was the first woman to report news on network television. I bet you said Barbara Walters. BUZZ! The correct answer is Estelle Parsons, who was part of the original lineup of NBC’s Today Show.)

Her husband, Beverly Weston is played by Broadway veteran Jon DeVries (Major Barbara, the Inspector General, Devour The Snow). It quickly becomes apparent that Bev Weston is singing his Swan Song with accompanying orchestrations courtesy of Mr. Jim Beam. We are not surprised to learn that he has gone missing after going out fishing on a nearby lake.

Before his abrupt departure, Weston/DeVries, delivers a searing monologue. In a drunken, rambling soliloquy, delivered to a bemused American Indian housekeeper he is thinking of hiring to care for his ailing wife (played with understated salt of the earth sincerity by relative newcomer DeLanna Studi). Bev sums up his wife’s personality saying, “my wife’s a cold-blooded woman, and I don’t mean so in a metaphorical sense.” He then proceeds to rattle off a laundry list of prescription depressants she has become addicted to in the course of her chemotherapy. “I forgot to tell you the punch line,” he says ruefully, pausing for dramatic effect. “It’s MOUTH cancer.” Weston is as consumed in uncontrollable laughter as the would-be housekeeper is gripped by stunned silence.

We learn that Bev Weston was at one time, a prize-winning poet. He hasn’t written a word in over forty years, his literary voice drowned out by the storms of his turbulent marriage. He instead resigned himself to an unsatisfying career as a college professor and solitary drunk.

When his eldest daughter Barbara Fordham, played by Obie, Theatre World Award-winner and Drama Desk nominee Shannon Cochran, returns home from Colorado with her philandering college professor husband Bill (Steppenwolf ensemble veteran Jeff Still), the two are in the throes of impending divorce. “You had to decide you wanted to pork Pipi Longstocking!” she derides him. Their constant fighting drives their teenaged daughter Jean (a whimsical Emily Kinney) into a pot-induced fog in order to escape the pain.

The two try to pull the wool over everyone’s eyes but Violet is having none of it. She claws away at their thin veneer of civility with the ferocity of a she-lion. “We’re having truth here tonight!” she declares triumphantly, waving her little bag of pills above her head like a lightsabre.

The family is gathered at the funeral table in honor of her late husband, who (no surprise) may have committed suicide on the lake. The gathering is more like a séance than a wake, with Violet summoning up, instead of the spirit of the dead, the buried regrets and recriminations of the past.

There is one absolutely devastating scene in which the entire family breaks out in a collection of simultaneous arguments. At one point, they rise to a fever pitch of cacophony, sounding like a frantic fugue. Its all played out over the strains of a wild Eric Clapton guitar riff raging in the background. Brilliant!

There are a few moments of lucid reflection. At one point, Barbara Fordham reflects in the moments after burying her father, “It’s a good thing we can’t see the future. It would make you not ever want to get out of bed.” At another moment, when she and her philandering husband face off about his affair which tore them asunder, he says, almost lovingly, “It’s a terrible thing. This Gordian Knot between us. The phrase refers to an intractable situation, which is resolved by a decisive stroke. It derives from the legend of Alexander The Great, who tore apart a complex knot with his sword. Myth has it that it was a tactile riddle woven by the gods to determine the ruler of the land of Gordium in the Persian Empire.

Violet is an equal opportunity basher. Women get their comeuppance as liberally as men. “I didn’t say women got more unattractive as they get older. I said old women are UGLY!”

Tracy Lett’s writing lays bare the raw emotions of a family in crisis and in pain. Watching August: Osage is akin to watching the aftermath of the Haitian earthquake. There is the occasional consolation of a victim emerging from the rubble. Healing tears drown out the wails of pain and despair. There is, in the end, the kind of uneasy bonding that only survivors of a great tragedy can share.

August: Osage County runs through February 14th, Valentine’s Day. It’s the perfect tonic for those who tire of the hearts and flowers treacle of the day. For tickets and show time information, visit www.broadwayinchicago.com.

Posted by Dwight the Connoisseur at 2:58 PM