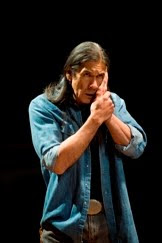 Brett C. Leonard’s world premiere production of The Long Red Road at Goodman Theatre through March 21 is anchored to a car crash nine years before the action begins. That crash killed one of Sam’s (Tom Hardy) children, maimed his wife and caused him to run away to an Indian Reservation to drown himself in drink.

When we first see Sandra, Sam’s long abandoned wife (Katy Sullivan in her Goodman onstage debut), she is getting ready for bed, taking off her prosthetic legs. For most of the rest of the time we see her, she is in a wheelchair, her bare stumps aggressively thrusting toward us. I could not take my eyes away. How did the Costume Designer (Janice Pytel) achieve that searing effect? Did the wheelchair have some magic compartment? Were the legs bound backward as in the Toulouse Lautrec film?

No: Katy Sullivan was born with stumps, which has not stopped her from making a career in TV as well as on the stage. Was the role written with her in mind? No again. That she got the part merely confirms the curious happenstance of how art and life sometimes interweave themselves.

“Katy was working for us as an intern,” a Goodman spokesman revealed, following the opening night performance. “She wanted to audition for the role. She did so and she got it!”

Philip Seymour Hoffman (Capone, Doubt), in his Chicago directing debut, uses Eugene Lee’s in-the-round set in Act One as a double exposure photo negative, juxtaposing two trios of unrelentingly bleak lives: Sam, his lover and enabler Annie (Greta Honold in her Goodman debut) and the reservation’s Indian bartender (Marcos Akiaten (in his Goodman debut) inhabit the same spaces as Sandra, Sam’s brother Bob (Chris McGarry) and his 13-year old daughter Tasha (Fiona Robert). Poverty and bleak despair are the same on the reservation or in the Kansas house; only Edward Pierce’s lighting illumines one or the other reality as they slowly, infinitesimally, inch toward each other.

Act One ends with Annie phoning Sam’s family to come get him. She hopes that together they will be able to save Sam. But Sam is clear; he doesn’t want to be saved. Unlike an O’Neill drunk who binges, Sam drinks himself awake, drinks himself to sleep and drinks every waking moment in between.

Act Two is as harshly bright as Act One is dark. Until Annie’s call no one even knew Sam was alive. The brothers’ confrontation is a tour de force duet. Always living in his younger brother’s shadow, when Sam disappeared, Bob moved into his house, his marital bed and fathered his goddaughter. It is unclear how intimate the relationships are. What is clear is that Tasha achingly missed her real daddy all the days and nights of her young life. When they finally meet and hug and Sam is gentle, loving and gallant, it is as if the drawings she is always making might become the design of the life she hopes for. Unfortunately, it all ends in ashes.

Posted by Dwight the Connoisseur at 5:14 PM