Humans no match for 101 Dalmatians in Broadway In Chicago show 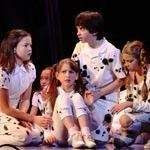 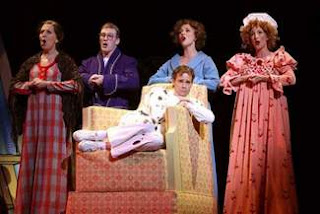 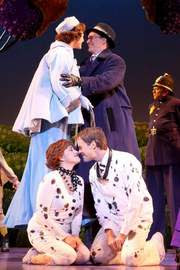 Cruella DeVil is the true "Queen of mean"(when you put the two words together, it spells ‘Devil’!) and the most deliciously evil anti-heroine, as played by the beauteous Sara Gettelfinger, but even she is no match for the cute kennel of Dalmatians and the troupe of child actors that inhabit the cast of 30. They received uproarious ovations at the Broadway In Chicago premiere of 101 Dalmatians at the Cadillac Palace Theatre in performances now through February 28.

There are some rather clever inventions, such as the elevation of the human characters on stilts. The perspective sets up an effective spatial relationship of dominance over the human actors who play dogs and the dogs themselves. Then there are the stunning, brightly colored costumes and sets by .I met composer and co-lyricist Chicagoan Dennis DeYoung, a founding member of the rock band STYX by chance during the intermission. He was in the midst of receiving hugs and kisses from those seated around him. Listening to the bubbly score with Orchestrations by Danny Troob and Dance Music by Mark Hummel and the lighter than air delivery by the orchestra, conducted by Don York one could see why.

I must admit I started dozing during all the plot setup tedium of Act One. Cruella did manage to get off one good line. After describing in salacious detail how she plans to dispense with the tribe of stray Dalmatians and turn them into the equivalent of spotted Christmas stockings, she turns on a stilted stiletto while saying, "Now, that we've dispensed with the pleasantries!"

Things start moving along swimmingly toward the end of Act One and certainly in Act Two.

The kids really steal the show with scintillating song and dance, especially in the showstopper,” Be a Little Bit Braver.” They’re so absolutely captivating that you almost wish you were young enough to be one of them. The human Puppies also kicked off Act Two with a brilliant dance number, "Break Out."

Okay, some of the adult performers rated laughing man applause. Cruella's two henchmen, Jasper and Jinx (Michael Thomas Holmes and Robert Anthony Jones) danced and sung their way into everyone's hearts with "Having the Crime of Our Lives," a charming Marx Brothers inspired turn in. But the night really belonged to the kids and those oh-so-sweet 101 Dalmatians.

Cruella finally gets hers’, right in the rumble seat of her classic Rolls after much inspired Keystone Kops hi-jinx, directed byJerry Zaks.

Broadway In Chicago's 101 Dalmatians continues through February 28. Take the kids; it’ll heighten the enjoyment. If you don't have any, rent them for the night!

Posted by Dwight the Connoisseur at 9:31 AM