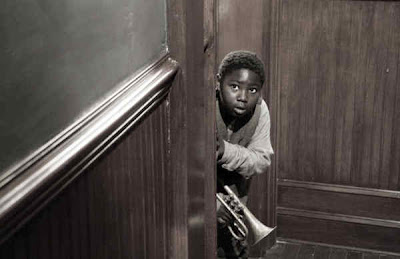 Chicago-LOUIS, Daniel Pritzker's film homage to Louis Armstrong, Charlie Chaplin and the birth of jazz had its world premiere at Symphony Center. Directed and co-written by Chicago native Pritzker, the film tells the story of the impoverished six-year-old Armstrong, whose dreams of playing the trumpet are intertwined with the grand bordellos, gangs and the corrupt underworld of 1907 New Orleans.

A modern reimagining of an early silent film, LOUIS was photographed by Academy Award-winning cinematographer Vilmos Zsigmond in color in order to approximate the grain and texture of old time black-and-white film.

The biggest difference between Pritzker's film and actual silents is music: Instead of a lone piano or organ, LOUIS had glorious, live accompaniment by Wynton Marsalis and his 11 piece jazz ensemble. Wynton's jazz alternated with pianist Cecile Licad playing music by Louis Moreau Gottschalk, Chopin and others. Marsalis, an executive producer, scored the film. Andy Farber was the conductor. Branford Marsalis plays the orphanage director who gives Louis his first real trumpet and first gig (in the institution's marching band).

Anthony Coleman stars as Louis. Jackie Earle Haley, in a Chaplin homage, plays the corrupt politician with more than a passing interest in a brothel. Shanti Lowry is the beautiful prostitute who captivates both the politician and young Louis.

Dance is another of the stars of LOUIS. Choreographer Hinton Battle brilliantly incorporates modern and African dance, classical ballet and even point work in his tapestry. Dan Moore's creative costumes make "ladies of the night" look like an exotic ballet ensemble.

Posted by Dwight the Connoisseur at 5:09 PM