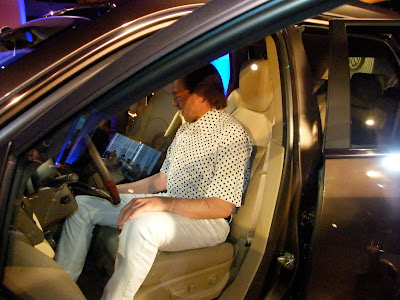 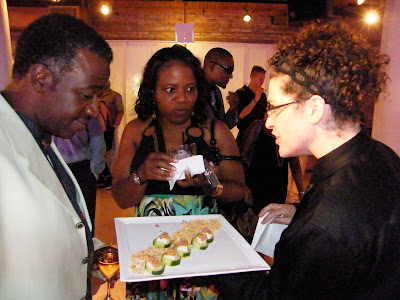 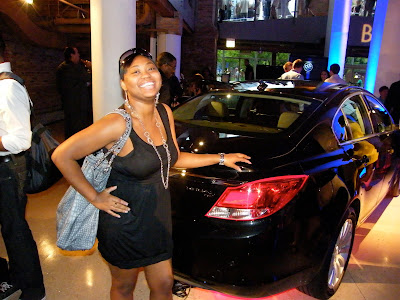 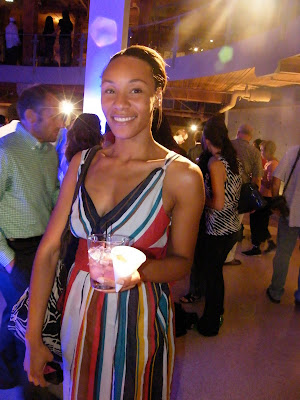 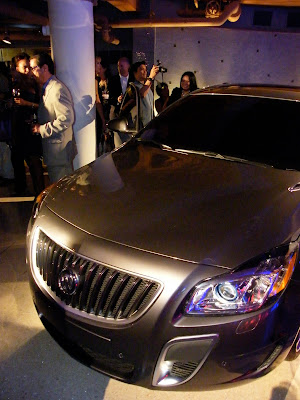 Great wine, regal cocktails, fabulous art and a terrific new line of premium American cars made for a spectacular evening on Chicago’s Riverfront. The event was Buick Remix held on a beautiful summer’s night.

General Motors is leading the turnaround of the auto industry. The company is even edging toward a public stock offering, amid solidifying profits. A big part of that turnaround is being attributed to the Buick brand, particularly the Buick Enclave, a luxury seven-seat family passenger vehicle, which is showing an increase in sales and customer satisfaction.

With that news as a backdrop, Buick held a premiere event at Chicago’s River East Arts Center that more resembled an Opening Night After Party for the Chicago International Film Festival than a product launch for the new midsize 2011 Regal sport sedan.

Black Opal Cabernet and Chardonnay wine from Australia flowed as premium hors d’ oeuvres such as Kobe beef ‘sliders’, Maryland blue crab cakes and Mandarin duck crepes were passed by white-gloved servers. The wine was an appropriate culinary prelude because lent an impression of intrigue and sophistication to the occasion. Augustana provided the appropriate live musical mix of jazz, soul and samba.

The ‘Opal’ connection was not lost on this observer, because the 2011 Regal is based on the award-winning Opel Insignia—the 2009 European Car of the Year. The Regals’ development is rooted in Germany, where the globally led engineering team created the Insignia. The Insignia has garnered more than 31 prestigious awards and is the best-selling midsize sedan in Europe.

From the ‘oohs and aahs’ of the well-dressed crowd looking at the floor models of the 2010 Buick Lacrosse, the all new 2011 Regal, the Enclave and the GS Concept high-performance sports sedan, placed strategically showroom style around the party space, the impact was made with resounding authority. The comments about the flashy new car from everyone who say in its luxurious interior with leather and heated front seats and driver-selectable Interactive Drive Control System and perused its sleek lines with its longer wheelbase and standard 18” inch wheels.

“We decided to hold this Regal Remix event in Chicago to showcase Buick’s entire new portfolio. This is a way to reach out to the community and show them what what’s new with Buick. The highlight of this event is the GS concept that will be available sometime in the future. But, before that, there will also be a Turbo equipped version to be introduced sometime this year as a 2012 model. This is a great drivers car with every comfort that drivers expect from a luxury vehicle. “

Of the Buick Remix event, Ayotte said, “What a great way to get to know a new car. You get to sit in the car and look at it while you’re enjoying yourself, listening to some great music. You get to talk up your friends while also talking up Buick. It’s a perfect mix!”

While some revelers made their way to the outdoor deck to view the stunning skyline as the sun set over the Chicago River, others marveled at the luxury features of the new Buick cars. Chris Wellington of Streeterville was impressed by the roomy interior of the Buick Regal GS show car.

“I can’t wait until it comes out. I especially like fact that it has a lot of headroom in the back. I’m often the designated driver when I head out clubbin’ with my “Boyz” and usually it’s a little tight for them in the back. They all used to be basketball players. This one would make a comfy fit for them.”

Marquita Johnson of Bronzeville loved the sleek lines and deep luster of the 2011 Regal. “This is definitely a classy ride!” she exclaimed.

Michelle Bunker, Buick’s Communications Manager, summed it up best. “Buick Remix is a great way to get to know the new Buick up front and personal. We’ve got some great cars here and people seem to be enjoying a great evening.” As I downed another glass of Opal Cabernet and savored it along with the deliciously rich-tasting Kobe beef slider, I couldn’t have agreed more.

Posted by Dwight the Connoisseur at 12:25 PM