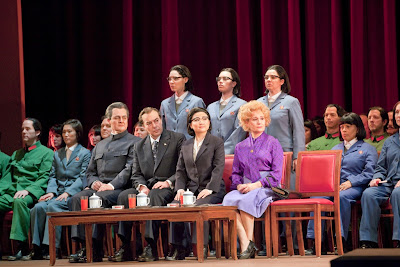 Miami—From the moment composer John Adams took the podium before the Metropolitan Opera Orchestra in the Met Live HD transmission and lifted the baton to his first-ever conducting effort to his opera “Nixon in China,” it was obvious that something historic and totally breathtaking was about to take place.

The opening strains of the opera were suspenseful, dramatic and fraught with fear of the unknown. The music pulsated with constantly shifting meters. It ebbed and flowed like the waters of the mighty Yangtze River, alternating subsiding into silent tide pools only to surge forward in a mighty torrent.

The opening chorus, so expertly honed into a cohesive, single voice by Chorus Master Donald Palumbo, intones “The people are the heroes now, Behemoth pulls the peasant’s plow.” At times, the modal chord structure and rhythmic pattern resemble that of the old Negro Spirituals, further grounding the idea that this is the “people’s music” and the sentiments of the common man and woman in the new, revolutionary China.

In Nixon’s opening aria, after alighting from the Presidential plane, Spirit of ’76, on that historic day, February 21, 1972, baritone James Maddalena, who originated the role, pronounced in Max Headroom verbal glitches and repetition, “the News is a mystery….”

Soprano Kathleen Kim gave the most stunning performance of the afternoon as the blood-curdling Chiang Ch’ing, Madame Mao. British mezzo Janis Kelly was the stately, morally sensitive Pat Nixon, who reacts with shock and sadness at the brutality that underlies the philosophical platitudes of the Cultural Revolution.

Choreographer Mark Morris’s riveting ballet “The Red Detachment of Women,” graphically paints a moving mural of the Cultural Revolution, which etches its slogans in the blood of its detractors.

Speaking to backstage interviewer and Met Opera baritone Thomas Hampson, Adam’s collaborator, Peter Sellars, who also directed the production for Live HD transmission, with composer Adams at the podium, expounded on the ideas behind the opera, which was originally his idea.

“The opera is full of contradictions, and the music expresses that so vividly with all these layers upon layers. You have Nixon who is slavishly trying to discuss the issues and Mao wants to rail on and on about philosophy. We’re not sure if he’s just being cagey and doing this to avoid getting down to basics. We see him going further into this cosmos of ideas that almost cease to have any real meaning, except in his own twisted reality and inflated ego.”

Composer Adams offered Hampson this summation:” Twenty-five years ago, Nixon was in disgrace and was pretty much reduced to the level of late-night television comedian jokes. The more I thought about it, the collision of cultures-Communism vs. Capitalism, East vs. West-we haven’t met Madame Mao yet, but we will in the Second Act. I think I was so young, so naïve and so green, that I had no idea what I was taking on. If I had thought about it, I probably would have freaked out!”

In talking about the characterizations, Adams said; “the Nixon I knew as a college kid had this very precise way of talking. He repeats himself constantly in the opening ‘News’ aria. Pat, as we see her in Act Two, going around China, she’s very sweet. Madame Mao, I kind of see her as a kind of shrieking, very fiery coloratura and Mao, as you can see, I thought of him as an over-the-top kind of Helden-Tenor. You see him as the ‘Leader of the People,’ whose really only listening to himself.”

What makes the opera important in his eyes, Adams further expounded, is the fact that events surrounding Nixon in China are still fresh in everyone’s mind. “It’s part of the themes of our lives. The events are ripped right out of the headlines and are prescient to what’s happening today. There isn’t a day that goes by that we don’t hear about terrorists or the President.”

Director and collaborator Sellars echoed the sentiment, pointing out,” how timely that this worldwide broadcast today is happening on the same weekend as the historic revolution in Egypt. It could not have been more to the point!”

Nixon in China played to packed houses in theatres around the word. There was not a seat to be found in the Regal 18 in South Beach, Miami, Florida where I saw the production. An encore performance will be held Wednesday, March 2 at 6:30pm. Visit www.fathomevents.com or www.metopera.org for tickets.

Posted by Dwight the Connoisseur at 7:32 AM