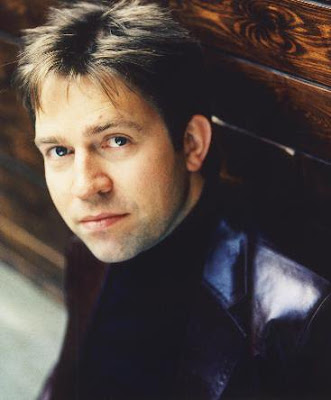 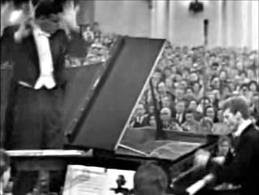 1. Guest conductor Gianandrea Noseda
2. Pianist Leif Ove Andsnes
3. Van Cliburn performs the Brahms Piano Concerto No. 2 before a packed Moscow concert hall in 1958 at the height of the Cold War

CHICAGO—A luminous full moon hovering high over Symphony Center on Michigan Avenue was portentous. On a night marked by warm, spring-like temperatures that melted the remnants of winter’s deadly snows. The night’s program of Stravinsky’s Divertimento, Suite from The Fairy’s Kiss, Borodin’s Polovtsian Dances from Prince Igor and Brahms' Piano Concerto No. 2 in B-flat Major, sounded more like one of the programs I would have heard when my parents were bringing me to Orchestra Hall as a reluctant pre-teen than anything programmed today. It is also like a program you’d hear today at the Mariinsky Theatre in St. Petersburg, where the Milan-born Guest Conductor Gianandrea Noseda became the first foreign-born Principal
Guest Conductor in 1997.

Inside Orchestra Hall, I was seated next to a woman whose husband had served in the violin section of the CSO for 48 years. Previewing the program, I commented that it had been more than 15 years since I’d heard the Borodin performed on the Armour Stage. (Program notes affirmed April 17, 1994 under conductor Valery Gergiev as the most recent CSO performance at Orchestra Hall). The names of Fritz Reiner, who recorded the Stravinsky with the CSO in 1958, and Van Cliburn, who recorded the Brahms Piano Concerto No. 2 with Reiner and the CSO in 1961, naturally entered the conversation. This was truly an ‘Old School’ program, we both agreed. It was one that the audience would enjoy every moment of.

Stravinsky wrote “The Fairy’s Kiss:” as homage to his favorite composer, Piotr Ilyich Tchaikovsky. Noseda invested in it all of the whimsy and fantasy at his disposal, dispensing dance-like rhythms like magic dust. The Scherzo, in particular, sparkled.

Borodin’s Polovtsian Dances from Prince Igor is rarely heard in concert halls these days. It’s a lovely work that centers around a lavish romantic theme that was once a popular hit for the pop singer Johnny Mathis, based on a re-working of the famous oboe melody for the Broadway hit “Kismet.”

Normally, the solo concerto is played with the guest artist in the first half of the program, before intermission. Noseda chose to program differently, saving the best for last, the way I remember it being done many times in European concert halls. Leif Ove Andsnes, lent the force of his significant prowess to the Brahm’s infusing it with all of the majesty, power and elegance it deserved. He displayed particular insight in the slow second passages and brought to mind the elegant playing of the great Van Cliburn in his performances with the Moscow Philharmonic. The simpatico exchange between Andsnes and cellist John Sharp in the Andante was transfixing.

As I exited Orchestra Hall into the near-balmy night and stared up at the full moon, I wondered if perhaps Van Cliburn and Reiner might have transcended time and space to ‘sit in’ for the evening’s performance.

Esa-Pekka Salonen conduct’s a program of Wagner ‘s Preludes to Die Meistersinger, Donatoni’s Esa and Bruckner’s Symphony No. 7 in E Major, Thursday, March 3, Saturday, March 5, and Sunday, March 6. Monday, March 7, violin virtuoso Itzhak Perlman joins members of the CSO and Rotary International for a benefit performance supporting the final push to end polio worldwide. A post-concert reception with the artist takes place in the Grainger Ballroom. Polio eradication resonates strongly with Mr. Perlman. He contracted the disease at age four and overcame serious physical challenges to become one of the world’s most celebrated musicians. For tickets and information, visit. www.cso.org.

Posted by Dwight the Connoisseur at 7:57 PM