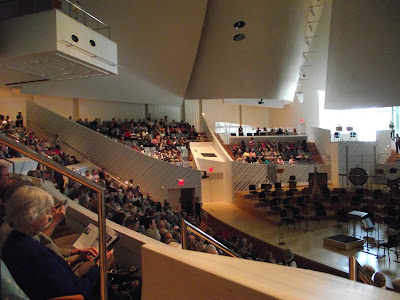 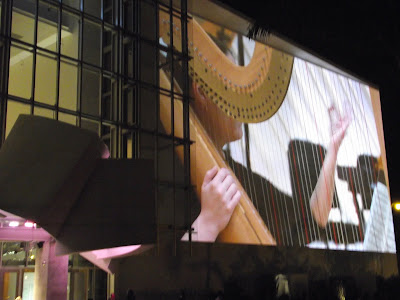 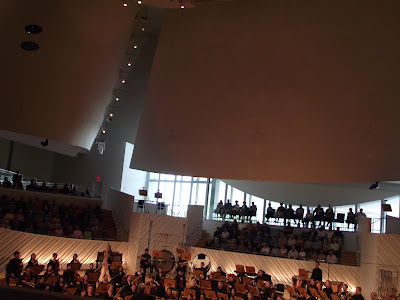 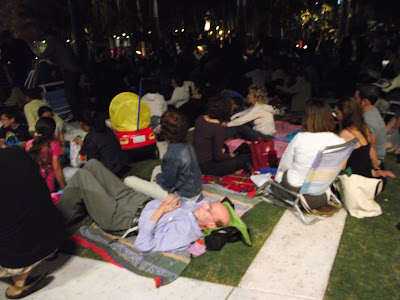 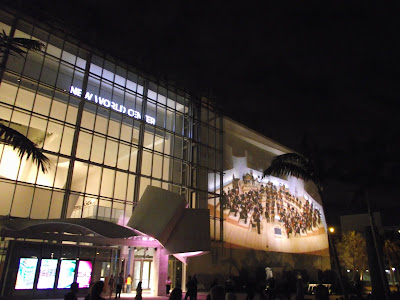 Miami Beach—Super Bowl Weekend brought a pair of “All Star” performances from this sun-kissed city’s New World Symphony Orchestra and the second introduction of a new technology designed to bring the concert experience inside to the public lawn outside the dazzling new Frank Gehry designed New World Center free of charge.

Founder and Artistic Director Michael Tilson Thomas conducted a wide-ranging program that included two works by the groundbreaking twentieth century composer Charles Ives, From the Steeples to the Mountains (1905-06) and The Unanswered Question (1906-08), Bella Bartok’s Concerto No. 2 for Violin and Orchestra (1938) with Hamburg-born violin virtuosos Christian Tetzlaff and a brilliant performance of Johannes Brahms Symphony No. 2 in D major, by the New World Symphony orchestra.

Maestro Thomas made full use of the new symphony hall’s “in the round” configuration by positioning the trumpet soloists on balconies that towered above the concert stage and the audience. It created a dynamic ‘echo’ affect that underlined the emotional dynamics of the musical. It served for particularly poignant effect in “The Unanswered Question,” which Maestro Thomas earlier explained, was the express role of the trumpet solo.

The $160 million concert hall and school was developed by the Walt Disney Los Angeles Symphony Concert Hall team of architect Frank Gehry (Guggenheim Art Museums, New York and Bilbao, Spain) and acoustician Yasuhisa Toyota. The concert hall employs multi-media technology inside, with program text and corresponding video images shown simultaneous to the orchestra’s performance. A high definition video WALLCAST” projects the concert inside to the 7,000 square foot façade of the building. A sound system of 167 individually tuned loudspeakers delivers the concert to the audience outside.

The inside of the New World Center is one of the most innovative in the world and has become a cultural focus in Miami. Architect Gehry has incorporated an interactive setting into the design of the symphony hall. Seating is positioned in a ‘vineyard pattern’ that weaves around the orchestra, completely surrounding it. No seat is more than 13 rows from the stage, creating a truly dynamic ‘live’ experience. The music comes at you from every angle. The sounds of the horns, drums, even the slightest touch of the strings in the quieter moments, seem to ‘ping’ on the ear as if you were sitting right there among the members of the orchestra. Huge curvilinear ‘sails’ hang from the ceiling that further enhance the acoustics and are also used to project video images and animation. It is truly an all-encompassing concert experience like no other I have had in my 30 years of writing about serious music in the world’s leading concert halls, including Carnegie Hall, Lincoln Center, Covent Garden, the Royal Philharmonic, Royal Albert Hall and Barbican Center in London.

The Saturday evening concert featured re-introduction of live concert WALLCASTStm, a giant exterior projection on the outside wall of New World Center to the beautifully landscaped pubic park of the campus where the outdoor audience is enveloped in a high-quality audio system while watching the concert simulcast through cameras inside the concert hall. Folks brought their picnic blankets and chairs, along with picnic dinners and take-out from nearby Lincoln Road restaurants. They brought their entire families, including young children and even the family dog to experience the musical treat. A smattering of bicycles, skateboards and baby strollers added to the summer’s eve atmosphere.

At times, the sound of sirens and the din of weekend traffic drowned out the quieter moments of the Ives pieces, but the piercing energy of Tetzlaff’s violin solos riveted the audience’s attention. The thunderous applause at the conclusion of the Bartok was as much for the performance as it was for the innovative WALLCASTtm. At the conclusion of the emotional performance, one concertgoer was overheard saying to anyone who’d listen. “At last. I feel like we finally live in a real city!” Amen to that!

Sunday’s performance saw Tetzlaff in championship form. He invested the Bartok, with its soaring, sonorous melodies and flashes of difficult, expressive runs, with the totality of his emotional being. His fingers seemed to dart across the violin’s soundboard as he executed the complex runs with alacrity. He dispatched the dizzying progression of double and triple stops with ease and forged ahead to an explosive conclusion.

Maestro Thomas and the New World Symphony gave a thoughtful, measured reading of the Brahms Symphony No. 2. He payed particular attention to the dance-like tempos in the third movement Allegretto graziosos (Quasi andantino), even swaying in time to the music to emphasize it lilting character. The finale, Allegro con spirito, was true to the notation, lively with spirited expression. It was a performance that reflected the sparkling vitality of the surroundings of the New World Symphony Center campus.

The weekend of February 11 an 12, the New World Center will see a performance of “Revolution: The Music of Igor Stravinsky” with Teddy Abrams, who marks his third season as Conducting Fellow, as guest conductor and Jamie Bernstein, as host/narrator. Ms. Bernstein is the daughter of musical icon Leonard Bernstein and producer of the symphony pops concert hit production “Bernstein on Broadway” produced with conductor Michael Barrett. The Valentine’s Day weekend is rounded out by a matinee performance of “French Legacies” featuring the music of Francis Poulenc, Pierre Boulez and Ernest Chausson with the dynamic Canadian pianist Stewart Goodyear as soloist. February 19-20 sees weekend concerts, “Tchaikovsky: The Fateful Fourth,” with legendary Maestro Sir Neville Mariner as conductor and dazzling soloist Isabelle van Keulen on her 1734 Guarnerius del Gesu violin, playing the Concerto in E minor for Violin and Orchestra by Felix Mendelssohn (1844).

The dazzling New World Symphony Center has quickly become a cultural landmark in Miami. It is worth a special trip, especially one to get away from Chicago and New York’s winter deep-freeze. With the sluggish economy and slump in tourism there are lots of deals on airfares and hotels that make a visit here affordable. I highly recommend it. For tickets and information,

Posted by Dwight the Connoisseur at 8:27 AM