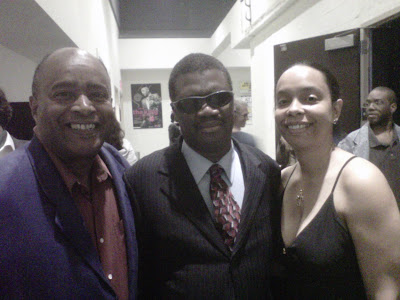 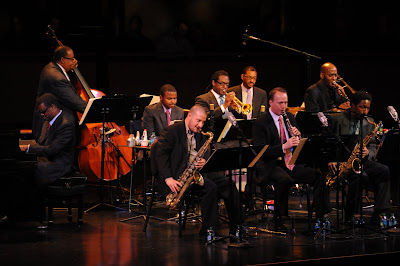 New York—Jazz piano virtuoso Marcus Roberts has the unique capability of emulating the musical stylings of those who preceded him, while maintaining his own unique musical personality. This fact was made evident with thundering clarity at his recent Jazz at Lincoln Center concert, The Music of Bud Powell & Earl Hines featuring the blind piano wizard and a celestial nine-member brass orchestra.

This reviewer was fortunate in that he was seated in a box seat positioned directly on stage, with the ability to view the orchestra and its leader up close and personal. The Rose Theatre is unique among jazz concert venues in that much of the seating is virtually “in the round”, giving the audience an intimate contact with the musicians and their music. Besides the superior sightlines, the acoustics are unparalled.

Bud Powell and Earl Hines are largely unknown to audiences today. But those who followed jazz in its heyday of the ‘20s through the swing era and its explosion into be bop hold their names in high reverence. Both were mercurial performers and prolific composers. In some ways, they may have contributed to their own obscurity because of their unselfish fostering of the careers of many young jazz artists who later eclipsed them.

With the passing of Powell at the tender age of 41 in 1966 at the zenith of his career, memory of his contributions to the bebop genre quickly faded.

Earl “Fatha” Hines fared somewhat better, performing well into his 80s, until his death in Oakland, California in 1983. I, in fact, reviewed his final performance at San Francisco’s Keystone Korner, a week before his passing.

At Marcus Robert’s opening night performance at the Rose Theatre, there were several well-known contemporary jazz artists in the audience, some of whom had played with either Powell or Hines, or both. This fact alone, attests to the importance of the evening and the lasting influence of these two great artists.

Roberts wasted no time with idle introductions, launching immediately into Hines’ rollicking “Riffin’ in Rag”. Tenor soloist Ricardo Pascal immediately raised the temperature to that of the surface of Mars with a searing solo that both cut to the heart of the melody and gave new meaning to the word improvisation. Fellow tenor man Stephen Riley, who recalled the early throaty, tonal utterances of the late Sonny Stitt, quickly followed him.

Ted Nash resurrected the spirit of Sidney Bechet on Clarinet and proved one of the inventive, bright spots of the ensemble. Rodney Jordan proved that the bass is far more than a side instrument, providing fluid lines that supported the tonal structure of the music, while lending it depth and ornamental grace.

As sparkling and propulsive as the music of “Fatha” Hines presented itself, it was the music of Bud Powell that provided the most enthralling moments of the evening and to which Roberts devoted much of his inaugural set.

Powell’s compositions and arrangements are almost hypnotic, with meandering melody lines that take unexpected, but captivating turns. The music is at once extremely complex, yet disarmingly simple. At times, it recalls the stomp and stride of Fats Waller and Jelly Roll Morton, who were his predecessors, at others, the quirky, offbeat inventions of his mentor, Thelonius Monk. (It was a barely 20-year-old Powell, a neophyte pianist with the Cootie Williams band, who introduced Monk’s signature tune “Round Midnight” into the musical anthology.) Powell’s music also alludes to the lyrical Impressionism of Ravel and Debussy and the stark modernism and chromatic daring of Stravinsky and Schoenberg. Roberts captured it all, with a dash of New Orleans spice thrown in, ably assisted by the thundering drumsticks of Jason Marsalis of the New Orleans musical dynasty. Robert’s interpretation of Powell’s arrangement of Charlie Parker’s harmonically challenging “Constellation” was just the springboard into a maze of musical genius that launched into a labyrinth not unlike Alice’s descent down the Rabbit Hole into the Land of Oz.

Marcus Roberts and his distinguished nonet brought out all of the mystery and magic of these two musical geniuses. In paying homage to their legacy, he created an absolutely wondrous concert experience and fulfilled the Mission Statement of Jazz at Lincoln Center to the letter.

May and June bring a series of explorations into essential ties between jazz and the American popular songbook. Singer and music scholar Michael Feinstein has curated a series of concerts that explore the common roots of 20th Century songwriting and performing art from Duke Ellington to George Gershwin and many in between. For dates, show times and information, visit jalc.org. Planning a summer trip to the Big Apple around a concert date at Jazz at Lincoln Center is as close to “a trip to the Moon on Gossamer wings” as you can get!

Posted by Dwight the Connoisseur at 8:18 AM