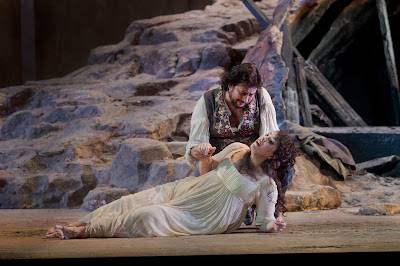 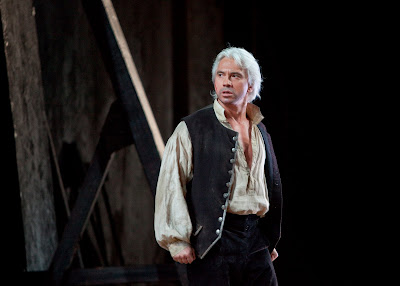 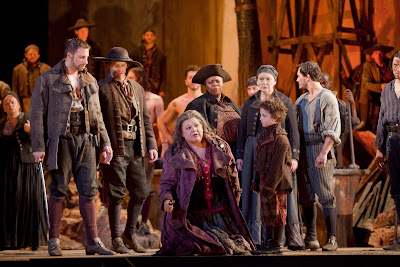 New York—“This opera has it all! Murder, intrigue, curses, romance, witchcraft!” The enthusiastic words were those of Russian baritone Dmitri Hvorostovsky, who plays the evil Royalist troop commander, Count di Luna in the Metropolitan Opera’s current production of Giuseppe Verdi’s Il Trovatore. In a breathless interview with backstage host, Met diva Renee Fleming, at the conclusion of an action-packed Act 1, in which there is a sword fight, a kidnapping and allusions to a witch burned at the stake, Hvorostovsky gave a snapshot of the afternoon’s performance, with its all-star cast of Sondra Radvanovsky as the embattled love interest Leonora, Marcelo Alvarez as her lover, the revolutionary masquerading-as- troubadour Manrico, Dolora Zajick as the vengeful gypsy sorceress Azucena and Stefan Kocan as di Luna’s young captain and henchman Ferrando.

The plot moves along like a thoroughbred out of the Kentucky Derby gate, making the opera’s nearly four hour running time seem as if it passed in the twinkling of an eye. The searing dramatics and emotion-laden singing, particularly that of Marcelo Alvarez and Dolora Zajick, is mesmerizing. Revealing camera close-ups orchestrated by Live in HD Camera Director Barbara Willis Sweete, adds to the heightened sense of drama. Set in the midst of the Spanish Civil War of the early 1800s, it presents a sweeping panorama of the social, political, psychological and supernatural forces that pervaded the opera’s moment in time. The larger-than-life presentation on the Live in HD movie screen only intensified the immenseness of the opera’s sweeping narrative.

I won’t ruin the thrill of seeing this opera in full performance by delineating the plot details. I instead encourage you to obtain a seat at the upcoming Encore Presentation Wednesday, May 18th, 6:30pm, local time at hundreds of theatres around the country. To find a screen closest to you, visit www.fathomevents.com or www.metopera.org.

Posted by Dwight the Connoisseur at 12:00 PM