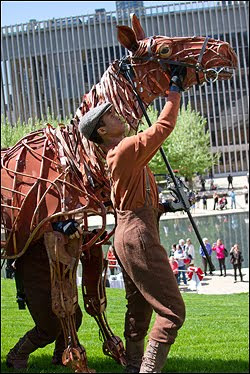 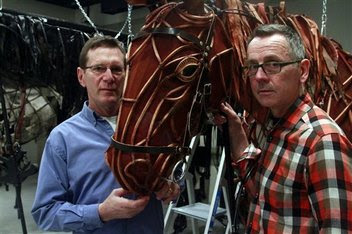 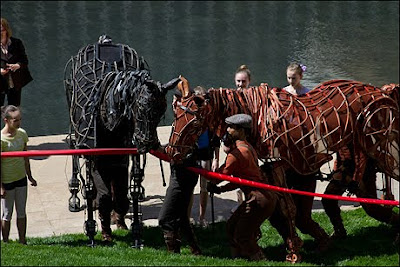 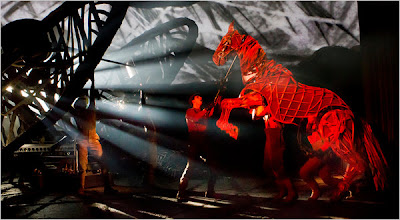 New York-Among the 2011 Tony Award nominations is the musical drama War Horse, which has five, including for Best Play. The National Theatre of Britain import, just opened a month ago, is already a runaway hit on Broadway. Playing to sold-out houses and now scheduled to run indefinitely run at the Vivian Beaumont Theatre in Lincoln Center, the producers have announced a 20 city U.S. tour that will begin in Los Angeles June 13.

War Horse draws the audience into the story, even before they enter the theatre. Outside, a display of larger than life fabricated horses greets patrons on the Illuminaton Lawn outside the theatre entrance as they descend the staircase to experience a mesmerizing mix of music, drama and masterfully manipulated life-sized puppets, masterminded by the Handspring Puppet Company of Cape Town, South Africa.

Created through the genius of Handspring co-founders Basil Jones and Adrian Kohler, the gigantic horse puppets are imbued with what the creators call “emotional engineering,” which gives the puppets personality and depth of character. Each of the horse-puppets is handmade and distinctive. Manipulated by a team of acrobatic puppeteers, who move inside them, they appear to be surprisingly real. In War Horse, the astonishingly life-like horse Joey, trots onto the stage and instantly captures our hearts.

Joey snorts, knickers, clops, whinnies and bucks just like a real horse. Within moments of arriving onstage he begins emitting the physical telltales that are a horses’ means of expressing emotion.

The cast of 35 and the exceptional work of the puppeteers make short shrift of the plays three hour running time. Horse movements by Toby Sedgwick are so seamless that the audience forgets the technical wizardry and becomes absorbed in the show. Each horse is brought to life and assumes a ‘character’. The mechanics of it all are quickly forgotten. It is a feat of alchemy.

This is not Ibsen. It is a basic boy-loves-animal, Candide-like journey into the heart of darkness that was World War I. What makes it work are some heartfelt performances from a terrific team of actors, such as Matt Doyle as Albert’s jealous cousin Albert and Alyssa Brenahan as Billy’s quietly suffering mother. The plot lines of War Horse are almost elementary in the execution, but what makes the production truly shine is the astonishing work of the puppet masters.

War Horse is a simple tale well told. It is visually stunning and packs an emotional wallop. Its like a thundering herd taking Broadway by storm. Go see it!

Posted by Dwight the Connoisseur at 4:49 AM