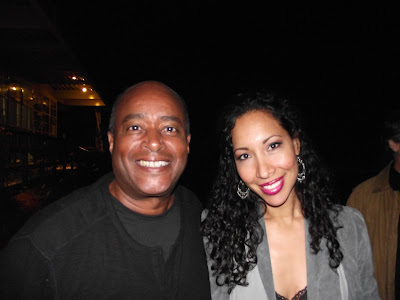 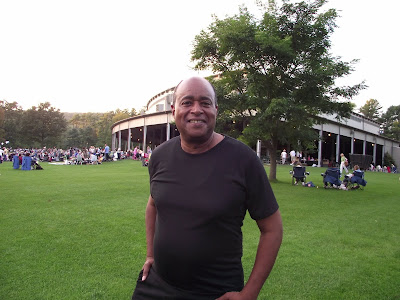 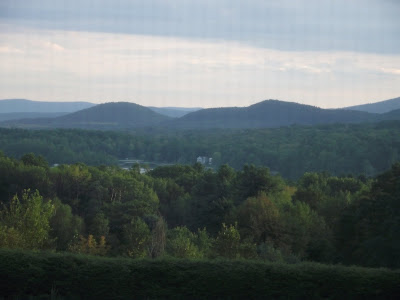 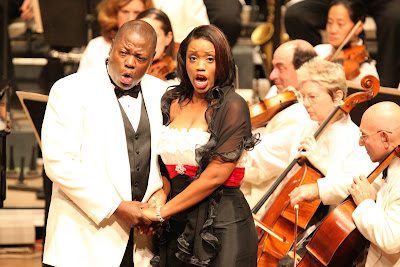 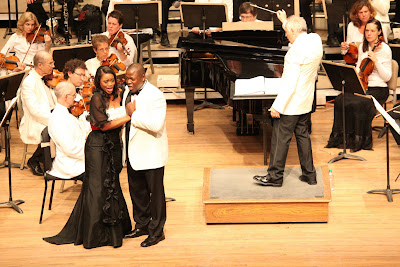 The view of the Berkshire Mountains from Tanglewood

Alfred Walker as Porgy and Laquita Mitchell as Bess

The Berkshire’s, Lenox, Mass.—Boston Symphony Orchestra’s Tanglewood Music Festival chose as one of its season closing concerts Gershwin’s Porgy and Bess in a concert version of its Original 1935 production. Presented without costumes or props, the singers acted out the parts in summery white tuxedoes for the men and colorful evening gowns for the ladies. With British Grammy Award winning conductor Bramwell Tovey at the helm of the Boston Symphony Orchestra in his Tanglewood and Boston Symphony Orchestra debut, and the robust Tanglewood Festival Chorus, ably conducted by John Oliver, the Koussevitzky Music Shed reverberated with soulful wailings from the depths of Catfish Row. Remarkably, without the benefit of any props or costumes, the singer/actors ably represented the anguish, trials and tribulations of life in the hardscrabble world of South Carolina’s bayous and back alleys.

Based on DuBose Heyward’s 1926 novel Porgy and later fleshed out into a play with spirituals by Heyward and his wife, Dorothy, the following year, the pair then collaborated with George and Ira Gershwin to create one of the most enduring works of both the American Broadway and the world’s operatic stages.

Porgy and Bess is Gershwin’s finest work. He spent months in South Carolina immersing himself in the music and physical setting of the opera. Having lived in Harlem, its no surprise that he became a master at incorporating black musical idioms into his compositions. The vernacular of jazz and the heart-wrenching wail of the black spiritual became an integral part of his far-reaching orchestrations. Under Maestro Tovey’s baton, the passages sparkled with depth and clarity. The singers represented one of the most superb assemblages of stellar African American voices on any concert stage. They delivered spine-tingling performances and breathed fresh life into Gershwin’s familiar melodies. So invested were they in the performance, they made it seem as if it had been written solely for that night’. Indeed, on so many levels, this evening’s presentation was a once-in-a-lifetime experience.

Beginning with the beauteous Nicole Cabell and her shimmering silver-toned rendition of the Gershwin classic, “Summertime,” the template was set for an unforgettable summer’s evening that will remain indelible.

Laquita Mitchell had the delicate beauty and the crystalline coloratura soprano voice needed to make Bess seem the vulnerable and besieged woman that she would become throughout the night. The object of Porgy’s headlong ardor (bass-baritone Alfred Walker, in an electrifying performance), their stormy relationship appears doomed from the start, but the ride to its obvious conclusion is so enthralling that both the principals and the audience, cast all caution to the wind. The self-serving ardor and silver-tongued overtures of Sportin’ Life (Jermaine Smith), and Porgy’s earnest-to-a-fault pursuit of Bess, propel the action. Storms exist on the emotional horizon that are as devastating as the physical threat of Irene.

There are some brilliant performances throughout. Tenor Jermaine Smith is a tour de force as the sarcastic Sportin’ Life. His leaps and struts were as “thrillin’” as anything performed by the late Michael Jackson. Mezzo-soprano Krysty Swann used her sultry voice and voluptuous beauty to good advantage to convey the sass of her character, Annie. Soprano Marquita Lister sparkled both visually and vocally in scene after scene. At every interlude, the Tanglewood Festival Chorus rocked the Shed with their echo. Catfish Row will never be the same! The haunting voice of the Strawberry Woman, soprano Alison Buchanan, also in her Boston Symphony Orchestra debut, was hauntingly effective as she made her mesmerizing entrance along the Shed’s perimeter.

Porgy and Bess does not so much entertain, as it inhabits your emotional universe. Its story of worshipful, unrequited and abusive love resonates deep within the soul and occupies a place in the farthest reaches of the human psyche. Its impact is felt long after the ovations have echoed within the Shed and faded into memory.

This night’s Porgy and Bess and its proximity to the storm-delayed dedication of Dr. Martin Luther King, Jr.’s memorial in the nation’s capitol brought pause for reflection.

Dr. King was a great lover of music and the arts and counted many African American artists as his closest friends. Indeed, the “I Have A Dream” passages of his most famous and final speech were uttered at the urging of his close friend and confident, the late, Gospel great, Mahalia Jackson.

It occurred that this performance by these gifted young African American singers was a far more fitting tribute to the life and legacy of Dr. King than anything that could have been manufactured in Washington. I’m sure that if the strains of “I’m On My Way (To The Promised Land)” had in anyway reached the National Mall, the stony visage of the King monument sculpted by Chinese Master Lei Yixin, would have broken into a heartwarming smile!

Posted by Dwight the Connoisseur at 4:35 AM