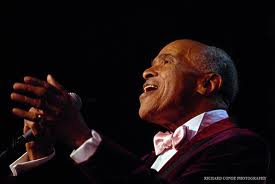 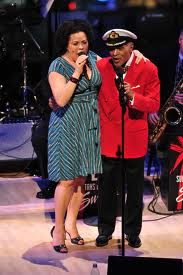 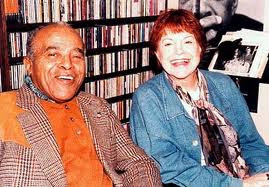 Photos courtesy Jazz at Lincoln Center
-Jon Hendricks in performance
-Scattin' with daughter Aria
-With Annie Ross
New York—Opening Night of Jazz at Lincoln Center Concerts featured a galaxy of jazz stars in An Evening with two NEA Jazz Masters, Jimmy Heath and his Big Band and celebrating his 85th birthday, preceded by Jon Hendricks, accompanied by the Andy Farber Octet and featuring a vocalese ensemble that included his daughters Aria and Michelle Hendricks and featuring the likes of jazz diva Dianne Reeves and vocal jazz genius Bobby McFerrin. The aggregate star power of the night brought out no less than the super nova of vocalists from all corners of the music spectrum, including opera legend Jessye Norman.
From the outset, Hendricks, who is 90 years old, an his supporting cast set the Rose Theatre on fire with their vocal pyrotechnics. The opening, Horace Silver’s Come on Home, was a tour de force for the elder Hendricks, who proudly showcased the vocal prowess of his pride.
Hendricks then talked of his time spent in Brazil and his collaborations with composing legends there, which sequed nicely into Every Time They Play This Song (E Preciso Perdoar), a composition co-written by Hendricks with Carlos Coqueijo Costa and Alcivando Luz. Hendricks ‘played’ a drum stick, while whistling an improvised melody, which made an almost ethereal sound. It was truly magical!
After that brief excursion far south of the border, it was back to jazz terra firma and Hendrick’s familiar Everhybody’s Boppin’. At 90, Hendricks voice may show a slight waver here and there around the edges, but the jazz fire still burns in his belly and he moves with the animated enthusiasm that has marked his career these 70 years. In his bright purple suit, he was a whirling dervish of jazz energy, at times setting the pace for the younger musicians on stage. He’s the Jack LaLane of jazz!
The entire vocal ensemble rocked It’;s Sand, Man, recalling Hendricks early Lambert, Hendricks & Ross days.
Dianne Reeves then strolled casually onstage to an avalanche of applause, but she demurred, preferring to let the spotlight focus firmly on the dynamo in front of her. She then proceeded to give one of the finest scat performances this side of “Sassy” Sarah on “Social Call,” the jazz standard written by Gigi Gryce, to which Hendricks adapted lyrics. Reeves sang it with a sense of intense joy mixed with reverence that made hers one of the standout performances of the evening.
Enter Bobby McFerrin to really set it off, with the two taking turns as a vocalese “instrumenta”l soloists, McFerrin a high pitched trumpet of sorts and Hendricks a tenor saxman with “Scattin’ on the Corner, which showed off their contrasting sthyles to tremendous advantage.
Count Basie & Jon Hendricks are the Red Beans & Rice of jazz and the entire ensemble came together to put the first set into the jazz stratosphere.
You would think it almost impossible to follow Hendricks & Co. with anything that would excite as much enthusiasm from an audience, but that certainly was not the case when 85 year old Jimmy Heath strode on stage in his blazing white jacket to lead his Big Band through the paces of his rhythmically complex compositions.
His collaborations with Dizzy Gillespie, Kenny Dorham, Benny Golson and John Coltrane, dating from the earliest days of his first big band in 1947, are the stuff of legend. He continues to curate new musicians for his band and cultivates them like rare musical orchids until the blossom into soio artists in their own right. Bassist David Wong is a shining example of that approach. He was hired to replace Jimmy’s brother, the legendary Percy Heath, when he died in 2005. Alto sax player Antonio Hart became his alter ego among the horn players. Pianist Jeb “General” Patton is the musical heart and pulse of Jimmy Heath’s tight-knight ensemble.
His loving tribute to his brother, Percy, Big “P” and the jazz standard Gingerbread Boy, popularized by Miles Davis and Dexter Gordon, was written, Heath said, in honor of his son who died last year at the age of 46, showed off the band at its best. Soloists reeled off line after line of inventive improvisation, which is the essence of modern jazz. Heath’s driving rhythms and sparkling melodies are what make jazz the life force that it is around the world. If I don’t see another jazz concert this year, I can now say that I heard one of the best of all time at JALC.

Cassandra Wilson brings her Grammy-winning vocal chops which meld urban jazz with her Mississippi blues heritage to the Rose Theatre September 30 to October 1. For more information, visit www.jalc.org.
Posted by Dwight the Connoisseur at 11:25 AM