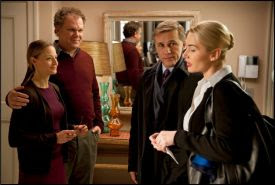 NEW YORK—The 49th New York Film Festival opens tomorrow with the Roman Polanski’s Carnage. The Sony Pictures Classics release is a searing commentary on the social civilities of our time, where savage emotionalism lies just beneath the surface of the banal conventions and verbal platitudes that pass for daily human interactions.

All of the action in this parlor drama takes place in the living room (and bathroom) of the Brooklyn apartment of the Foster and Reilly characters where the Waltz and Winslet characters have come to hash out a dispute between their two 11 year old sons, which resulted in one of the boys receiving two broken teeth and a gashed lip.

The film starts out civilly enough, with the two sets of parents haggling over a carefully worded document, presumably for medical insurance purposes, detailing the events of the supposed assault “following a verbal dispute, Zachary Cowen, armed with a stick. No, that’s a bit too much, let’s just say carrying a stick!), proceed to sit down over coffee and discuss the matter. There’s an undercurrent of hostility between the two couples that starts to percolate to the surface from the outside. Polanski, a master at pacing, allows the animosity to grow by incremental degrees, with his superb cast providing just the right sense of timing and pacing, until it erupts into over-the-top hostility that practically jumps off of the screen.

Winslet is superb as the upper class, restrained one, who starts to become unglued at the outset. She suddenly takes ill after eating the Foster character’s Apple and Peach cobbler (a treackly sweet concoction in which the secret ingredient is revealed to be graham cracker crumbs) and barfs all over her husband and the Foster character’s prized tabletop art book. (There is no buying another one. Its out of print!). Her regurgitating is perhaps symbolic of the ugliness that lurks inside the characters, who all start to get more animated and ugly as the evening progresses from coffee and dessert to a bottle of the Reilly character’s prized single malt scotch. We learn that his wife, the strong-willed, opinionated Foster character, is a borderline alcoholic, with a nasty temper, when fueled by strong drink.

There are no surprises in Carnage, especially for those who saw the play. The treat is how Polanski and his stellar cast handle the all-too-familiar subject matter. The film shows the ugly underbelly of human nature, but in Polanski’s skilled hands, deliciously so. Opening Night of the 49th New York Film Festival Friday, September 30 at Alice Tulley Hall, Lincoln Center.
Upcoming attractions include Michelle Williams in My Week With Marilyn, a bio pic centering around the production of Marilyn Monroe’s 1957 film The Prince and the Showgirl, the Mexican action/thriller Miss Bala, which portrays the societal toll on the little people affected by the Mexican drug cartel reign of terror, a contender for Best International Film and Melancholia, an evocative psychological thriller with sci-fi overtones, starring Kirsten Dunst in a haunting portrayal of mounting mental illness. For more information on the New York Film Festival, visit www.filmlinc.com.
Posted by Dwight the Connoisseur at 4:26 AM