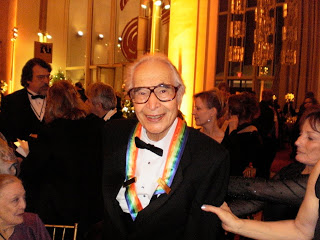 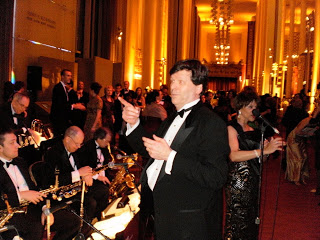 The White House reception for the 2009 Kennedy Center Honorees

Remembering Dave Brubeck: A Lifetime of Creativity and Innovation

This morning would have marked the 92nd birthday of one of the greatest jazz legends of our time, Dave Brubeck.  He died at the age of 91, near his home in Wilton, Connecticut.

The Chicago Tribute reports that Brubeck was en route to an appointment with his cardiologist when he was stricken Wednesday morning, said his longtime manager-producer-conductor, Russell Gloyd. The pianist died of heart failure at Norwalk Hospital, in Norwalk, Conn., near his home in Wilton, Conn.


Brubeck was anticipating a birthday concert Thursday, when he would have turned 92. The performance will go on, but in the form of a tribute, in Waterbury, Conn.

New York--I arrived at Reagan International in the midst of a surprise snowstorm and freezing sleet-turned to snow on a chilly December night after a hastily arranged flight from my then-home in Miami, to attend the 32nd Kennedy Center Honors at Kennedy Center. Ironically, just hours before, I was standing outside the Miami Beach Symphony Center, interviewing Sean Penn in 80 degree weather, at a benefit concert he was holding during Art Basel. The trip to D.C. came about because a musician friend of mine, Jeff Lindberg, who is music director of the Chicago Jazz Orchestra, had arranged for a last-minute invitation, actually, a backstage pass, for me to attend the Kennedy Honors awards presentation and subsequent dinner, where his band has provided the music for the past 25 years. I wanted to attend this particular awards ceremony because one of the idols of my youth, Dave Brubeck, was the recipient of  one of the awards.
On the night of the award, Brubeck was celebrating his 89th birthday.  Hearing of his passing, just short of his 92nd birthday, I began to reflect on my long personal association with the artist and my lingering admiration of him.

I first encountered Dave Brubeck when I was working as a news anchor and reporter at KGO-TV in San Francisco. What a treat it was when I learned that I had been assigned to cover the opening of the Concord Pavilion, an outdoor concert venue, similar to Ravinia Festival in Chicago and Tanglewood in Massachusetts. Dave Brubeck was the headlining act. It was significant because Brubeck was born and raised in Concord and this was a shining example of a "home town boy making good." The crowd was overflowing and effusive in its admiration. It was my privilege to meet Brubeck backstage and to interview him for a TV news feature. As a young music student in Chicago, I had learned to appreciate his artistry and spent many hours practicing the music he had written.

I next encountered Brubeck in my early 30s, when I had moved back to Chicago from San Francisco. I had joined Fourth Presbyterian Church in Chicago's Gold Coast. Coincidentally, at the time, the Music Director and choir Master was Russel Gloyd, who was also the Music Director for Dave Brubeck. Each year, Brubeck and his quartet would travel to the Windy City to give a concert of his religious music with the Fourth Presbyterian Church choir and members of the Chicago Symphony Orchestra. Because of my church membership and media affiliations, I was regularly afforded a seat in one of the the front row pews to witness this extraordinary melding of faith and creativity.

The Fourth Presbyterian Church connection is signigicant, because, as a teenager, I was deeply intrigued by Dave Brubeck's compositions, in which he explored the combination of jazz as it relates to religious themes. Brubeck wrote a number of religious compositions and performed them regularly in benefit concerts around the world. As a teenager, while attending Englewood High School in Chicago, I was inspired by my music teacher and mentor, Harvey Pranien, who is now a Fine Arts dealer in Evanston, Illinois, to write a piano jazz suite based on the Passion of Christ, much in the fashion of music written at the time by Brubeck. Pranien arranged for me and my trio to perform the music I had written at Fourth Presbyterian Church in the very same sanctuary where Brubeck later performed his jazz/religious compositions. Brubeck and I joked about the irony of this during a backstage conversation at one of his last Fourth Pres concerts a few years ago.

Once, in a summertime concert at Ravinia, outside Chicago, I was again afforded backstage access to interview Brubeck and to spend a few moments chatting with the great artist over a bottle of cranberry juice. At the time, he was admiring a bronze-colored velvet sportcoat that I was wearing. I offered to give it to him. He of course, refused. After I insisted, he proposed a deal, he would give me a signed copy of his latest CD, "New Wine," in exchange for the jacket. Deal! I subsequently gave the CD to my daughter as a Christmas present. She still treasures it to this day. Ironically, I had informed Brubeck that I was embarking on a new venture, writing about wine and developing avenues for exposing my newfound passing in the media. After much travail and time, that passion has now become my full-time profession. But, I digress. The real purpose of this treatise is to vent my personal grief at the loss of this  pivotal figure in my life.

In my formative teen and early adult years, there were two people that I idolized and who shaped my philosophical and intellectual template, Dr. Martin Luther King Jr. and Dave Brubeck. On the surface, these two people could not appear more disparate. But, if you look deep inside them and into their life's body of work, there could not be more commonality betweeen them.
Here now is the text of my post from the 32nd Kennedy Center honors in December, 2009:

Jazz legend Dave Brubeck celebrated his 89th birthday by receiving his ultimate birthday wish: being named as one of the honorees at the 32nd Kennedy Center Honors. “I never thought this day would happen,” he said at a star-studded dinner in the rotunda of the Kennedy Center following the three and a half hour tribute program, attended by President Barack Obama and “First Lady Michelle Obama. “I’m still having trouble believing its true!”
Brubeck, who changed the face of jazz fifty years ago with his landmark recording of the composition “Take Five”, written by his alto saxophonist, Paul Desmond. “My label, Columbia, was hesitant to release the album,” he said, “because it broke new ground. Nobody had ever heard a jazz tune in 5/4 time. Everything followed the traditional 4/4/ time. The record company just didn’t think people would accept it.”
Fortunately, for Brubeck and the jazz-listening world, they were wrong. The album, “Time Out,” became the best-selling jazz LP of all time.
Brubeck was among the most stellar collection of honorees assembled in the event’s history, opera great Grace Bumbry, who broke opera’s long-standing color line, actor Robert De Niro, who Meryl Streep credited with “practically creating his own school of acting that we all tried to emulate,” rocker Bruce Springsteen, who received both heartfelt tributes and songs from legends Aretha Franklin, John Mellencamp, Melissa Etheridge and Sting and comedian-actor-director Mel Brooks, who was lionized by protégés Matthew Broderick, Martin Short and Ed Norton.
Chicago Jazz Orchestra, in their 21st straight year, provided the musical footnote to the elegant dinner following the tribute in the rotunda of Kennedy Center, under the watchful eye of the giant bust of President John F.Kennedy, for whom the arts and entertainment center is named. Vocalist Frieda Lee provided Ella-like song stylings, with jazz greats Herbie Hancock and Terrance Blanchard among the audience.
Posted by Dwight the Connoisseur at 3:36 AM