NEW YORK---Fourth of July 2013  was celebrated with music, fireworks and terrific food in some terrific settings. The afternoon began at Avery Fisher Hall in Lincoln Center, where the New York Philharmonic presented the tenth season of Summertime Classics, with the first program featuring the New York Philharmonic and the United States Coast Guard Band in its Philharmonic debut in  Star-Spangled Celebration. Conducted by Grammy Award (r) winning British conductor and composer Bramwell Tovey, the program featured the works of American composing legends Aaron Copeland, John Philip Sousa, Leonard Bernstein and World Premiere of the Orchestral Version of the conductor's own composition, The Lincoln Tunnel Cabaret, with the Philharmonic's Principal Trombone, Joseph Alessi, as soloist.

Maestro Tovey, who is celebrating his 13th season as Music Director of the Vancouver Symphony Orchestra, returned to the podium as the founding conductor of this unique series. He proved to be an affable host, jokng at the incongruity of a Brit hosting a uniquely American celebration. "Actually, I was sent here by the British government to apologize for what happened in 1776," he quipped to the audience.

Aaron Copeland's Four Dance Episodes from Rodeo (1942/43), with its familiar themes, Buckaroo Holiday, the haunting Corral Nocturne, Saturday Night Waltz and the wildly spirited Hoe-Down, got the program off to a rousing start. It continued with the conductor's own composition, Thge Lincoln Tunnel Caberet for Trombone and Orchestra, written espressly for trombonist Alessi. According to Tovey, the composition was based on a fantasy interpretation of Alessi's daily commute to orchestral rehearsals in the city while navigating the hectic traffic through the fabled Lincoln Tunnel. No matter that Alessi actually navigated the George Washington Bridge for the ride end, the original scenario, with blaring car horns, stalled cars and the image of Alessi exiting his car to soothe the frazzled nerves of his fellow drivers with an impromptu trombone solo, served as a much more lively inspiration. Alessi       showcased the versatility of his instrument with flashes of brilliant playing, punctuated by flurries of difficult passages played with ease.

The next portion of the program featured Capt. Kenneth W. Megan and the U.S. Coast Guard Band in their Philharmonic debut, in a scintillating reading of Leonard Bernstein's Candide Suite, arranged for the brass band by a friend of Bernstein's,  the composer and arranger Clare Grundman, the Masque for Symphonic Wind Band, by the contemporary British composer Kenneth Hesketh, and an exploration of Sousa's time-honored marches, including Hands Across the Sea (1899), The Liberty Bell (1893) and The Stars and Stripes Forever (1896). Capt. Megan and the ensemble proved how wonderful the sound of a brass band can be, with its powerful depth and tonal color. It also displayed the vitality to Sousa's music. Although the composer wrote hundreds of marches, each of them shone with their own unique brilliance.

The program included a moving tribute to members of the Armed Forces, with veterans who were members of each of its branches standing during the playing of their respective themes as the band played the Armed Forces Medley. The combined forces of the Philharmonic and the U.S. Coast Guard Brass Band infused this medley with all the majesty it, and they deserved.

Hudson Terrace and the retractable roof of its rooftop desk proved to be the most effective place to watch the Macy's Fireworks display over the Hudson River. Preceded by a sumptuous and endless Barbecue buffet, lively zydeco music and an appearance by the Food Network's "Chopped" celebrity chef Jordan Andino, it provided a luxurious setting to climax the greatest Fourth ever! 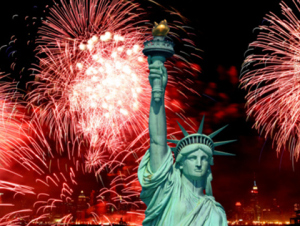 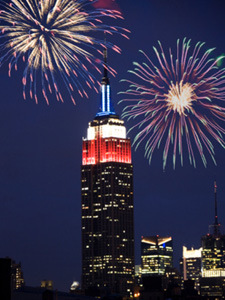 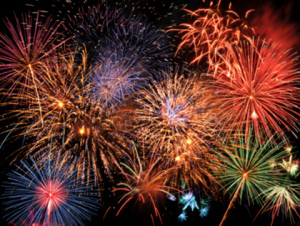 Posted by Dwight the Connoisseur at 2:26 AM